An American executive held hostage for nearly a week by his company's Chinese workers in a pay dispute said Friday from his Florida home that he was held for ransom and paid nearly half a million dollars for his freedom. Starnes left the Beijing factory Thursday after he and a union representative reached an agreement to pay the workers. 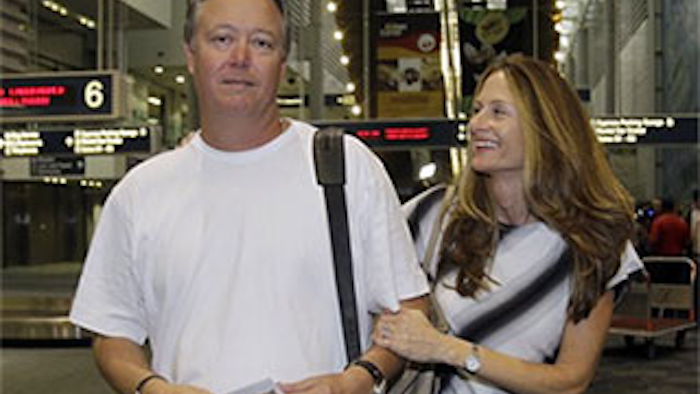 MIAMI (AP) — An American executive held hostage for nearly a week by his company's Chinese workers in a pay dispute said Friday from his Florida home that he was held for ransom and paid nearly half a million dollars for his freedom.

"One-hundred percent I got held for ransom," Chip Starnes said on NBC's "Today" show, just hours after arriving back home from China. He said he was "held ransom for severance package" and paid between $500-600,000 cash for his freedom.

Starnes left the Beijing factory Thursday after he and a union representative reached an agreement to pay the workers who had demanded severance packages similar to ones given to laid-off co-workers in a phased-out division, even though the company said the remaining workers weren't being laid off.

Messages left by The Associated Press with Starnes and the manager of his Coral Springs, Fla.-based Specialty Medical Supplies were not immediately returned.

It is not rare in China for managers to be held by workers demanding back pay or other benefits. Police are reluctant to intervene, as they consider it a business dispute.

Starnes earlier told the AP he planned to get back to business, and even rehire some of the workers who held him.

Starnes previously said the company had been winding down its plastics division, with plans to move it to Mumbai. He arrived in Beijing last week to lay off the last 30 people. Workers in other divisions started demanding similar severance packages.

"The whole entire factory turned against me," Starnes said on the "Today" show, responding to remaining workers' claims that the company owed unpaid salary.

"That's false, they were all paid," Starnes said. "And now they all got paid more than they should have."

Starnes arrived at the Fort Lauderdale-Hollywood International Airport in Florida early Friday and told reporters he was relieved to be home after his "nightmare" experience. He said in a telephone interview with AP on Thursday that he had been forced to give in to what he considered the workers' unjustified demands. At the beginning of his captivity, workers had deprived him of sleep by shining bright lights and banging on windows of his office, he said.

The company would keep the plant open in China, he said, although he had no plans of returning himself.

"I don't know if it would be wise for me to go back over there," he said.