The company blamed for a chemical spill that left 300,000 West Virginians without safe drinking water filed for bankruptcy Friday, temporarily shielding it from dozens of lawsuits, many by businesses that were forced to shut down for days. 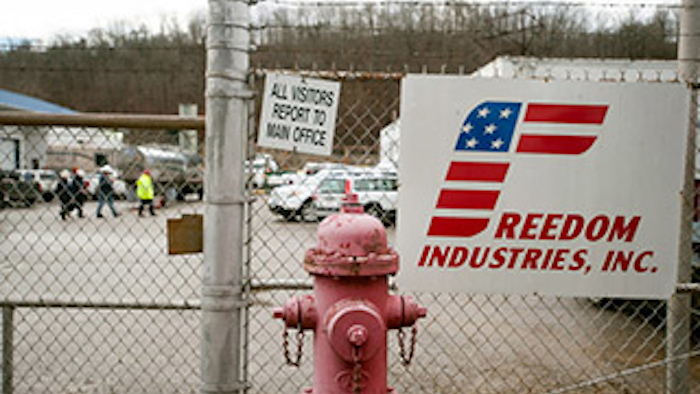 CHARLESTON, W.Va. (AP) — The company blamed for a chemical spill that left 300,000 West Virginians without safe drinking water filed for bankruptcy Friday, temporarily shielding it from dozens of lawsuits, many by businesses that were forced to shut down for days.

Freedom Industries Inc. also used its bankruptcy papers as a forum to hypothesize about what caused the spill.

The company filed a Chapter 11 petition with the U.S. Bankruptcy Court in the Southern District of West Virginia, eight days after the spill was discovered.

Company president Gary Southern signed the paperwork, which lists both the company's assets and liabilities as being between $1 million and $10 million. It says the company has at least 200 creditors and owes its top 20 creditors $3.66 million.

The bankruptcy proceedings temporarily halt the lawsuits against Freedom Industries, said Charleston attorney Anthony Majestro, who is representing several small businesses that sued the company. Majestro said his clients are weighing an option to petition the court to proceed in hopes of collecting on Freedom's insurance policy. It depends on the company's level of coverage, Majestro said.

Matt Ballard, president of the local business group Charleston Area Alliance, said last week he couldn't put a number on how much money businesses had lost.

The bankruptcy filing doesn't stall lawsuits against other parties targeted in the spill, said Washington, D.C., attorney H. Jason Gold, a bankruptcy expert who is not involved in the pending lawsuits. Nor does it free Freedom Industries from its responsibility to rectify environmental damage caused by the spill, said Department of Environmental Protection spokesman Tom Aluise.

Mark E. Freedlander, an attorney with the law firm representing Freedom Industries, said in a statement Friday that "the petition and related pleadings speak for themselves."

According to bankruptcy documents, Freedom Industries is wholly owned by Chemstream Holdings, Inc., a company located at the Pennsylvania headquarters of Rosebud Mining Company.

In the documents, Freedom Industries also gives a possible explanation for what caused the chemical leak. The company said a nearby water line burst during last week's frigid temperatures, the ground beneath a storage tank froze, and some kind of object punctured a hole in the tank's side, causing it to leak. The document says "It is presently hypothesized" that this is what caused the leak.

The water was tainted after the chemical later leaked through a containment area at a facility owned by Freedom Industries. The water ran into the Elk River, contaminating the state's largest water system.

After the spill, residents in a nine-county area around the state capital of Charleston were told not to use the water for anything other than flushing toilets. Some businesses and schools were forced to close for several days. The water restrictions have since been lifted for all residents, but officials suggest that pregnant women not drink the water.

The spill has become the focal point of the state's 60-day lawmaking session, which started the day before last Thursday's spill. Gov. Earl Ray Tomblin announced plans Friday to push for regulation of above-ground storage tanks. He also wants to require contingency plans for water companies. State Sen. John Unger, D-Berkeley, has spelled out specifics to regulate and inspect storage facilities in SB 373.

Government entities ranging from the U.S. Attorney's Office to a West Virginia legislative panel on water resources are investigating the spill.

The terminal that leaked had not been inspected by state officials since 2001, when it was owned by a different company operating under more stringent rules. State officials said Freedom Industries bought the terminal last month, though the firm has long been tied to the property.

Freedom bought the terminal from Etowah River Terminal LLC, a company formed to buy the terminal site so Freedom could receive chemicals by barge, according to a 2005 court filing. State records show the former president of Freedom Industries was listed as the manager of Etowah.

A spokeswoman for Gov. Earl Ray Tomblin did not answer a phone call for comment.