Another Death In TN Plant Explosion

A West Tennessee sheriff says an employee who was severely injured in a manufacturing explosion has died. 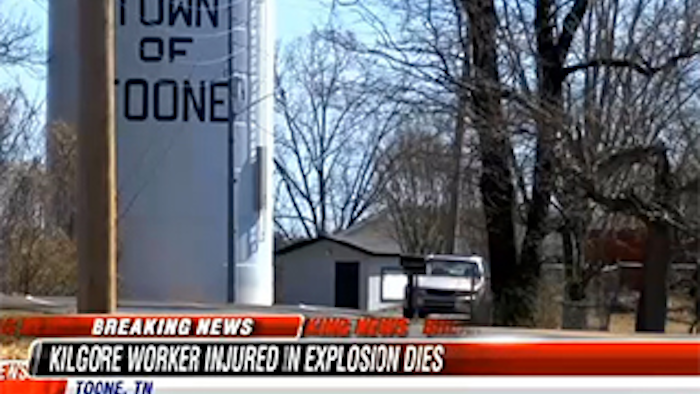 TOONE, Tenn. (AP) — A West Tennessee sheriff says an employee who was severely injured in a manufacturing plant explosion has died.

Hardeman County Sheriff John Doolen told WMC-TV on Monday night that Michael Chism, who was burned over 90 percent of his body in Saturday's blast, had died.

A response team of chemists, engineers and bomb technicians assembled by the Bureau of Alcohol Tobacco and Firearms began its investigation of the blast at Kilgore Flares plant in Toone on Monday.

Kilgore makes air and naval decoy flares for the military.

The ATF told The Jackson Sun that investigators expect to determine the cause of the blast quickly.

"The ATF National Response Team has secured the scene of the incident and is in the process of making a determination as to the cause," said ATF spokesman Michael Knight said on Monday.

Meanwhile, a separate investigating is being conducted by the Tennessee Occupational Safety and Health Administration.

Jeff Hentschel, a spokesman for that agency, said results won't be released until the probe is completed in six to eight weeks. He said Monday that investigators have begun their work.

The newspaper reported that other workers have been injured or killed at the plant.

In September 2010, three people were severely burned in a flash fire. One victim died a year later. Following an investigation, the company was cited for 14 violations and fined $348,000.

In April 2011, three more employees were injured in another incident — two were burned and one was knocked unconscious.

Prior to 2002, eight people died from injuries in incidents at the plant, according to Jackson Sun records.