Explosion And Fire At Fiberboard Plant

Explosions and a fire rocked a fiberboard plant in northwest Montana, but all of the workers inside were safely led from the building and no major injuries were reported, authorities said. 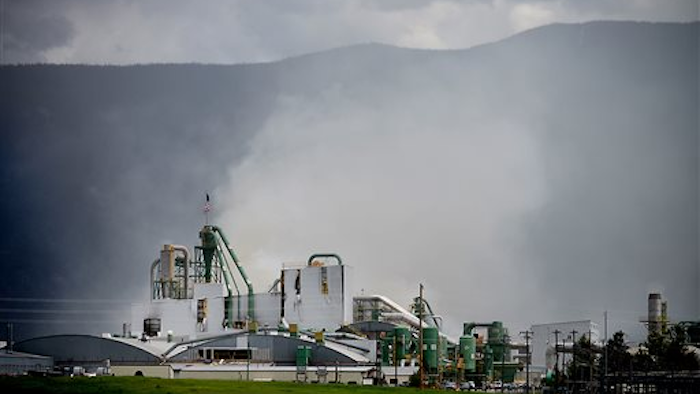 COLUMBIA FALLS, Mont. (AP) — Explosions and a fire rocked a fiberboard plant in northwest Montana, but all of the workers inside were safely led from the building and no major injuries were reported, authorities said.

Residents near Plum Creek Timber Co.'s medium-density fiberboard plant reported that two or three loud explosions shook their homes about 3 p.m. Fire departments and emergency officials from across Flathead County responded to the fire, which was still belching thick plumes of smoke late in the afternoon.

Sheriff Chuck Curry said a few workers were treated at the site for smoke inhalation.

"There is extensive damage to the exterior of the building," he told the Flathead Beacon. "It was a significant explosion."

It wasn't clear what caused the blast or what the extent of the damage was, Plum Creek spokeswoman Kate Tate said.

"We're still in the process of containing the situation," she said. "I know (the workers) have all been evacuated and they are safe."

Tate said she did not know how many people were inside the plant at the time.

Residents near the plant said they felt and heard at least two loud explosions.

"I was sleeping and there were two blasts that woke me up," said Krista LaRoque told the Flathead Beacon. "It kind of shook the house, and I thought that my husband was moving things."

The plant reduces wood into fibers that are treated and squeezed at high pressure and temperature into panels, the Daily Inter Lake reported.