LAS VEGAS (AP) — The Latest on the CES gadget show in Las Vegas (all times local): 11 a.m. A startup carmaker, Faraday Future, is promising again to have electric cars roll off a new $1 billion assembly line in southern Nevada in 2018. Faraday showed off a prototype at the CES gadget show in... 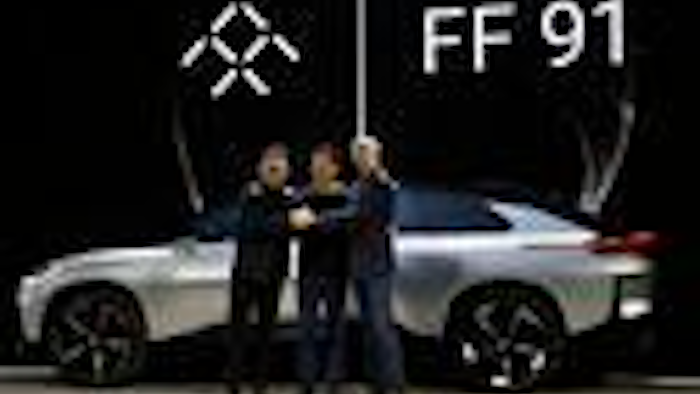 LAS VEGAS (AP) — The Latest on the CES gadget show in Las Vegas (all times local):

A startup carmaker, Faraday Future, is promising again to have electric cars roll off a new $1 billion assembly line in southern Nevada in 2018.

Faraday showed off a prototype at the CES gadget show in Las Vegas. Tuesday's demonstration had the company's four-door, 1,050-horsepower FF 91 model clocking 0-to-60 mph in just under 2.4 seconds.

Faraday Future officials say the car's battery allows a travel range of up to 378 miles, and a modular design will allow for a faster rollout of future models.

Company executive Nick Sampson didn't say when construction would resume at the factory site, where work was suspended in November. Nevada pledged up to $335 million worth of incentives to attract Gardena, California-based Faraday Future to North Las Vegas.

Carnival, the operator of such cruise lines as Princess, Holland America and Carnival, is unveiling new concierge technology designed to help crew members anticipate and respond to passengers' needs.

A waiter, for instance, could bring a guest's favorite cocktail before she asks, or someone could remind a lounging guest that a yoga class is about to start.

The development comes as the leisure-cruise industry plays catch-up with travel peers like hotels and airlines, which now let you unlock rooms with a smartwatch or fly with a boarding pass on your phone. Carnival is announcing the system on Wednesday at the CES gadget show in Las Vegas. It's scheduled to debut on the Regal Princess cruise ship in November.

Research firm Gartner says it expects worldwide shipments of PCs, tablets, phones and other gadgets to remain unchanged in 2017.

Gartner says it expects 2.3 billion such devices to ship this year, the same as in 2016. This finding comes as gadget makers unveil all sorts of new products at the CES tech show in Las Vegas this week.

Looking ahead, Gartner says the embattled PC market should return to growth in 2018, thanks to a natural cycle of upgrades. That's mostly driven by an increase in premium "ultramobiles" — including ultra-slim Windows 10 devices and Apple's MacBook Air.

Smartphones are expected to grow just slightly; much of the growth is in emerging Asia and Pacific markets.

In a report Wednesday, Gartner research director Ranjit Atwal says consumers have fewer reasons to upgrade or to buy traditional devices. Rather, he says, "they are seeking fresher experiences and applications in emerging categories such as head mounted displays, virtual personal assistant speakers and wearables."

New television sets from LG will include an ultra-slim model that's less than 4 millimeters (0.15 inch) thick.

The company is achieving this by moving many of the bulky components — such as graphic cards — into a separate box connected to the screen with just a cord. The speakers are also separated; the TV has two round, retractable speakers on top.

The new TV will also have better audio, using Dolby Atmos technology, along with high-end OLED screen technology. OLED — which stands for organic light-emitting diode — can produce better pictures because each pixel produces light individually. Traditional TVs are backlit and use filters to block out light — but not well enough to produce pure black. OLED is rare in TVs and is currently found mostly in smartphones.

LG will have non-OLED models, too, and promises new technology to make colors more vibrant. LG also says an LG Technicolor mode will be added to TVs in 2017 to add to color accuracy.

Samsung, LG, Sony and others are unveiling new offerings at CES that highlight higher-resolution pictures, thinner displays and brighter colors. The moves come as high-definition and 4K TVs are becoming cheaper and more mainstream, so top TV makers are competing for the higher end of the market.

LG says it will release prices in February and start selling them in March.

What's new in television sets this year? Incrementally better pictures, larger screens and cheaper prices — and that's about it.

True, set manufacturers are bombarding consumers with a whole series of buzzwords — such as OLED, HDR and wide color gamut. Flashy new sets with these supposedly "must have" features are getting the spotlight Wednesday at the annual CES gadget show in Las Vegas.

But when it comes down to it, none of these amount to revolutionary improvements for your living room. Set manufacturers may not have run out of technological tricks yet, but for this year, at least, they're reduced to improving what's already out there.

Gadgets like virtual-reality headsets and smartphones have snagged much of the buzz that flashy new TVs once had. And stand-alone streaming-TV devices now offer better features than smart TVs. So TV makers like Samsung and LG have doubled down on what they know best: screen technology.

"4K" sets with twice the resolution as high definition is making a push into the mainstream this year, as prices come down and video providers offer more 4K streaming and channels. Manufacturers are also touting improvements in color — brighter whites, darker blacks and a wider range.

Comcast is hoping to make Wi-Fi in the home faster through an updated router — the machine that serves as data traffic cops for Wi-Fi networks.

Comcast's updated router costs $10 a month and comes with a modem. It's the same price as before. Customers can still buy their own equipment and save money over time. Comcast is also offering extenders to help Wi-Fi work all over a house, though the company wouldn't say what it might charge.

Eero, Starry, Google and Luma are among the companies that have fancy new router systems, but they start at more than $100 and run as much as $500.

Fewer than 5 million Comcast customers, mostly those on the most expensive internet packages, will get the new high-powered router this year. The company says it could take years to reach the bulk of its more than 24 million customers.

Another 10 million customers with the company's existing routers will get a software update by March to make it easier to set up parental controls and install "smart" thermostats and other internet-connected appliances. These features also come with the new routers.