The Latest: Turkey: No joint strikes with Russia in Syria

BEIRUT (AP) — The Latest on the developments in civil war (all times local): 5:30 p.m. Turkey's foreign minister has clarified comments on conducting joint operations with Russia against the Islamic State group in Syria, saying Turkey wanted greater cooperation with Moscow, not joint strikes. ... 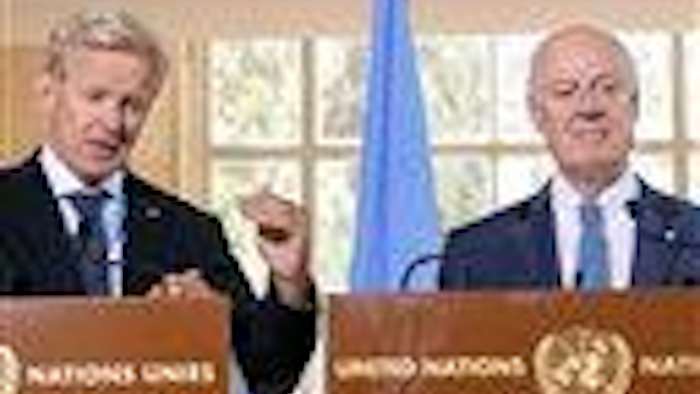 BEIRUT (AP) — The Latest on the developments in civil war (all times local):

Mevlut Cavusoglu told reporters Thursday that NATO member Turkey is seeking "coordination" with Russia on operations against the militant group. He says "this does not mean that Turkish jets and Russian jets will fly together."

He added that "since Daesh is our common enemy, it would be good if Russia would . target its operations against Daesh," using an Arabic acronym for IS.

The Russian military says six of its long-range bombers have struck Islamic State facilities near Raqqa.

The Defense Ministry says the Tu-22M3 bombers flew from their base in Russia Thursday to strike targets southeast, north and northwest of Raqqa. It says the raid destroyed a large ammunition depot, a plant producing chemical weapons northwest of the city and a large IS training camp.

The ministry says fighter jets from the Russian base in Syria covered the bombers, which have returned to their base.

The Britain-based Syrian Observatory for Human Rights says 24 civilians were killed in Russian airstrikes on Raqqa, the IS de facto capital in northern Syria, along with six others whose affiliation or identities could not yet be confirmed.

A senior U.N. humanitarian official says Russia has agreed to hold talks with U.N. officials to hammer out a workable plan for a humanitarian pause in fighting in the Syrian city of Aleppo.

Jan Egeland, adviser to U.N.'s special envoy to Syria, says a three-hour daily cease-fire proposed by the Russian military "is really nothing. We need 48 hours."

He says the logistics of providing aid to Aleppo are so "enormous" that a 48-hour pause each week is needed. Egeland spoke at a joint press conference with the U.N. Syria envoy, Staffan de Mistura.

De Mistura said an attack with chlorine gas in Syria would be "a war crime" but said he could not confirmation that it actually happened. He also said the three-hour Russian offer of a truce every day in Aleppo is "not enough."

The New York-based Human Rights Watch is calling on the U.N. Security Council to demand an independent investigation into a spike in Russian and Syrian military attacks on hospitals in rebel-held areas in Syria.

The group said Thursday it has documented six airstrikes by Syrian and Russian government planes in the rebel-held province of Idlib and besieged parts of Aleppo that have temporarily shut down the health facilities and killed at least 17 civilians. The Syrian government and Russia have previously denied targeting medical facilities.

Nadim Houry, deputy Middle East director at Human Rights Watch, said airstrikes on hospitals have become "routine" in Syria, despite U.N. resolutions calling for immediate actions to stop such attacks. "The world powers may not be able to agree on a solution to the Syrian conflict, but surely they must be able to agree on steps to ensure that those who attack hospitals will one day face justice," he said.

The Syrian American Medical Society, which operates medical facilities in opposition-controlled areas, said July was the worst month since the Syria conflict began in 2011 in terms of attacks on medical facilities, recording at least 43 such attacks.

Syrian activists say at least 20 civilians have been killed in airstrikes on Raqqa, the de facto capital to the Islamic State group in northern Syria.

The local activist group Raqqa is Being Slaughtered Silently says the strikes also cut the city's water supply. The group said a security building and a water pumping station were hit in the city, among other targets on Thursday morning.

The Britain-based Syrian Observatory for Human Rights also reported the airstrikes, saying 24 civilians were killed, along with six others whose affiliation and identities could not yet be confirmed.

Both groups said the strikes were launched by Russian jets, though it was not clear how they determined that.

Turkey's foreign minister says his country has called on Russia to carry out joint operations against the Islamic State group in Syria.

Cavusoglu says: "On the issue of Daesh, we have made a call to Russia. We said we have a common enemy which we can struggle against together."

Daesh is an Arabic language acronym for the Islamic State group.

A Turkish delegation made up of foreign ministry, intelligence and military officials were scheduled to hold discussions on finding a common ground on the Syria crisis

A Syrian military official is denying allegations of a chlorine gas attack against an opposition-held district in the contested city of Aleppo.

The official said Thursday that militants had fabricated the news and stressed that the Syrian army would never use chemical weapons.

The official spoke on the condition of anonymity because he is not authorized to give official statements.

The Observatory made no mention of chlorine gas.

Turkey's foreign minister says his country will resume its airstrikes against Islamic State targets in Syria, months after they were suspended following a major row with Moscow.

Mevlut Cavusoglu said in interview with Turkey's private NTV television on Wednesday that Ankara "will again, in an active manner, with its planes take part in operations" against IS targets.

Turkey had temporarily suspended its limited participation in the airstrikes campaign by the U.S.-led coalition, following soured relations with Moscow after Turkish air force jets downed a Russian warplane on the Syrian border in November.

Russia had retaliated by deploying long-range air defense missile systems to its base in Syria, 50 kilometers (30 miles) south of the border with Turkey and imposing an array of economic sanctions.

Cavusoglu's announcement comes after Russia and Turkey agreed to mend ties this week.

A Syrian activist group says there has been no letup to the fighting between rebels and government forces in the contested city of Aleppo despite a three-hour cease-fire declared by the Russian military, which is fighting alongside the government.

Rami Abdurrahman, head of the Britain-based Syrian Observatory for Human Rights, says the parties are clashing in the southwestern neighborhood of Ramouseh, which rebels seized from government forces last weekend.

Wissam Zarqa says via a messaging service that he is at "home and I don't dare to leave — the jets are not letting up."

A Syrian rescue worker says three civilians, a mother and two children, died in a suspected chlorine gas attack on an opposition-held district in the city of Aleppo.

Khaled Harah, a first responder, says a government helicopter dropped four barrel bombs on Wednesday night on the neighborhood of Zabadieh and that one of them released chlorine gas.

The report, which was posted online on Thursday, could not be independently verified and it was not clear how it was determined that chlorine gas was released.

The Britain-based Syrian Observatory for Human Rights, an activist group that tracks the civil war in Syria, also reported that government barrel bombs struck the neighborhood. It had reports of two killed and several people suffering breathing difficulties.

The Observatory made no mention of chlorine gas.