NEW YORK (AP) — Alvin Toffler, a guru of the post-industrial age whose million-selling "Future Shock" and other books anticipated the disruptions and transformations brought about by the rise of digital technology, has died. He was 87. He died late Monday in his sleep at his home in the Bel Air... 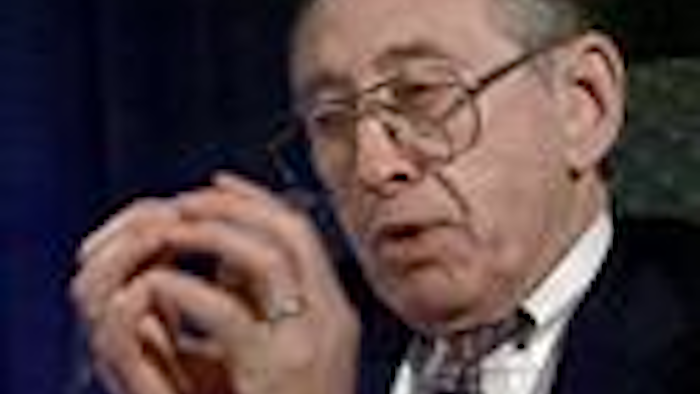 NEW YORK (AP) — Alvin Toffler, a guru of the post-industrial age whose million-selling "Future Shock" and other books anticipated the disruptions and transformations brought about by the rise of digital technology, has died. He was 87.

He died late Monday in his sleep at his home in the Bel Air neighborhood of Los Angeles, said Yvonne Merkel, a spokeswoman for his Reston, Virginia-based consulting firm, Toffler Associates.

One of the world's most famous "futurists," Toffler was far from alone in seeing the economy shift from manufacturing and mass production to a computerized and information-based model. But few were more effective at popularizing the concept, predicting the effects and assuring the public that the traumatic upheavals of modern times were part of a larger and more hopeful story.

"Future Shock," a term he first used in a 1965 magazine article, was how Toffler defined the growing feeling of anxiety brought on by the sense that life was changing at a bewildering and ever-accelerating pace. His book combined an understanding tone and page-turning urgency as he diagnosed contemporary trends and headlines, from war protests to the rising divorce rate, as symptoms of a historical cycle overturning every facet of life.

"We must search out totally new ways to anchor ourselves, for all the old roots — religion, nation, community, family, or profession — are now shaking under the hurricane impact of the accelerative thrust," he wrote.

Toffler offered a wide range of predictions and prescriptions, some more accurate than others. He forecast "a new frontier spirit" that could well lead to underwater communities, "artificial cities beneath the waves," and also anticipated the founding of space colonies — a concept that fascinated Toffler admirer Newt Gingrich, the former House Speaker and presidential candidate. In "Future Shock," released in 1970, he also presumed that the rising general prosperity of the 1960s would continue indefinitely.

"We made the mistake of believing the economists of the time," Toffler told Wired magazine in 1993. "They were saying, as you may recall, we've got this problem of economic growth licked. All we need to do is fine-tune the system. And we bought it."

But Toffler attracted millions of followers, including many in the business community, and the book's title became part of the general culture. Curtis Mayfield and Herbie Hancock were among the musicians who wrote songs called "Future Shock" and the book influenced such science fiction novels as John Brunner's "The Shockwave Rider." More recently, Samantha Bee hosted a recurring "Future Shock" segment on Comedy Central.

Toffler is credited with another common expression, defining the feeling of being overrun with data and knowledge as "information overload."

In the decades following "Future Shock," Toffler wrote such books as "Powershift" and "The Adaptive Corporation," lectured worldwide, taught at several schools and met with everyone from Soviet leader Mikhail Gorbachev to network executives and military officials. China cited him along with Franklin Roosevelt, Bill Gates and others as the Westerners who most influenced the country even as Communist officials censored his work.

In 2002, the management consultant organization Accenture ranked him No. 8 on its list of the top 50 business intellectuals.

After "Future Shock," Toffler also continued to sketch out how the world was changing and how to respond. In "The Third Wave," a 1980 best-seller that AOL founder Steve Case would cite as a formative influence, he looked to a high-tech society that Case, Steve Jobs and others were just starting to put in place. He forecast the spread of email ("electronic mail systems to replace the postman and his burdensome bags"), telecommuting, teleconferences, interactive media, devices that remind you "of your own appointments" and online chat rooms.

Overall, he pronounced the downfall of the old centralized hierarchy and looked forward to a more dispersed and responsive society, populated by a hybrid of consumer and producer he called "the prosumer."

Toffler collaborated on many of his books and other projects with his wife, Heidi, who survives him. He is also survived by a sister, Caroline Sitter. Toffler's daughter, Karen, died in 2000.

Toffler, a native of New York City, was born Oct. 4, 1928 to Jewish Polish immigrants. A graduate of New York University, he was a Marxist and union activist in his youth, and continued to question the fundamentals of the market economy long after his politics moderated. He knew the industrial life firsthand through his years as a factory worker in Ohio.

"I got a realistic picture of how things really are made — the energy, love and rage that are poured into ordinary things we take for granted," he later wrote.

He had dreamed of being the next John Steinbeck, but found his talents were better suited for journalism. He wrote for the pro-union publication Labor's Daily and in the 1950s was hired by Fortune magazine to be its labor columnist. The origins of "Future Shock" began in the 1960s when Toffler worked as a researcher for IBM and other technology companies.

"Much of what Toffler wrote in 'Future Shock' is now accepted common sense, but at the time it defied conventional views of reality," John Judis wrote in The New Republic in 1995.

"Americans' deepest fears of the future were expressed by George Orwell's lockstep world of 1984. But Toffler, who had spent five years in a factory, understood that Americans' greatest problem was not being consigned to the tedium of the assembly line or the office. As he put it: 'The problem is not whether man can survive regimentation and standardization. The problem ... is whether he can survive freedom.'"