One UK steel town, one crisis that affects the nation

PORT TALBOT, Wales (AP) — To Mark Turner, the Tata Steel plant in this small Welsh town isn't just a factory. The steel worker sees two dragons, the plant's blast furnaces, breathing fire into the dawn sky over a town where monks first built a forge in the Middle Ages. While his description may... 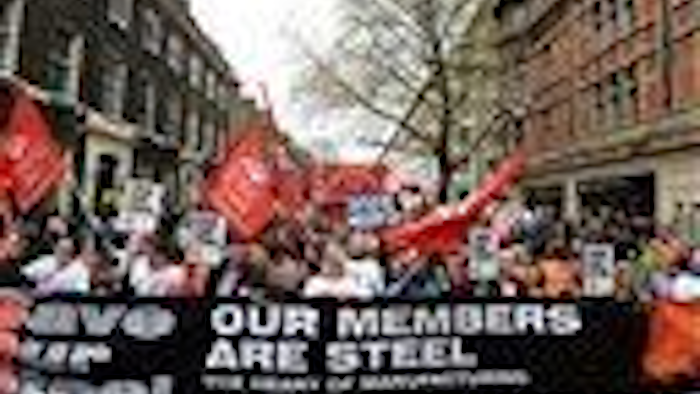 PORT TALBOT, Wales (AP) — To Mark Turner, the Tata Steel plant in this small Welsh town isn't just a factory. The steel worker sees two dragons, the plant's blast furnaces, breathing fire into the dawn sky over a town where monks first built a forge in the Middle Ages.

While his description may be the most colorful, he isn't alone in talking about Britain's largest steelworks as a living entity, the pulsating soul of the community.

Keeping the dragons alive has been the talk of the town since Tata Steel, a company based in India, announced plans to sell its U.K. businesses, which were losing 1 million pounds ($1.4 million) a day amid high costs and a glut of cheap Chinese steel in global markets. That raised fears the plant would close if Tata couldn't find a buyer, eliminating 4,000 jobs and severing the economic lifeline of the town.

Tata's announcement has thrown the troubles of the British steel industry into sharp relief, triggering criticism that Prime Minister David Cameron's government has been slow to respond. Port Talbot is the third British steel plant to face closure since last fall.

Steel production in Britain, which pioneered the business during the Industrial Revolution, dropped from almost 28 million tons in 1970 to 12 million tons in 2013, a decline that accelerated after the 2008 financial crisis. Meanwhile, global steel output jumped 96 percent from 2000 to 2014, driven mostly by China, which produced about 779 million tons in the latest year.

While British steelmakers and politicians have criticized China for selling steel at less than the cost of production, the government has been reluctant to ask the European Union to impose duties on Chinese steel because doing so might trigger retaliatory tariffs from Beijing and raise costs for other industries.

The government said Thursday that it was prepared to take a 25 percent stake in any rescue of Tata. While no buyer has announced a bid, British media reported this week that Port Talbot's management planned to make an offer.

David Blackaby, an expert on the Welsh economy at Swansea University, said the government's biggest problem is that it lacks an industrial strategy, so it has a hard time responding in a crisis.

In addition to stemming the tide of imports, supporters say the government should reduce energy costs and cut business taxes to help the steel industry. If it can't find a buyer, the government should nationalize the plants to ensure Britain keeps producing the steel needed by U.K. manufacturers, unions say, pointing to the more than 100 billion pounds the state pumped into banks during the financial crisis.

But the decline of the steel industry means that it now accounts for only 0.1 percent of the British economy, according to the House of Commons Library. Employment in the industry dropped to about 24,000 people in 2014, from 320,000 in 1971.

Complicating matters, the debate is taking place while the government is in the midst of a heated campaign over whether Britain should remain in the European Union.

David Worsley, research director of a Swansea University effort to improve industrial efficiency, said steelmakers in Europe, the United States and Taiwan are facing the same issue: how to better compete with the Chinese. What places like Port Talbot need, he argues, is help transition to new products or technologies.

"You don't get there by flicking a switch," he said. "It's a process that takes time."

While the problems of the steel industry may be global, they feel distinctly local in Port Talbot, a community of about 45,000 people on a narrow strip of coastal plain abutting green hills. The 200-acre steelworks co-exists beside the rows of houses where generations of workers have lived.

That once made Port Talbot the envy of its Welsh neighbors, where many communities were ravaged when their coalmines shut down during the era of Prime Minister Margaret Thatcher. It wasn't just that Port Talbot had jobs: it had well paid union jobs that allowed people to raise families and build lives that featured rugby leagues, cricket clubs and trips to the seashore.

That glory faded over time. Port Talbot's business district is dotted with boarded up shops, and blighted by the hulking steel frame of a building that was never completed. The businesses that remain are already laying off workers in anticipation that further cutbacks at the steelworks will hit them hard.

Steve Garvey is a former steelworker who was laid off in the 1980s. He now runs carpet and furniture businesses and is struggling to make sense of what's happening. Port Talbot's workers, he pointed out, have never been more productive, which adds to the sense of injustice.

"The uncertainty is causing so much stress," he said. "We have certainly seen a decline in people coming to spend with us."

Port Talbot is essentially a company town: almost everyone either works at the plant or has relatives or good friends who do. This means every development in the Tata Steel saga ripples through the community.

But despite the fear of what may come next, there is an undeniable thread through most conversations — that everyone is in this together.

Anthony Taylor, a member of the local government council and a retired steelworker, believes that comes from being closely tied to a sometimes dangerous industry — where one has to rely on one's co-workers and sometimes trust them with your life.

"We are like a family," he said. "We looked after each other."

At the Bro's Cafe, which is decorated by pictures of the mill, steelworkers come off shift in high-visibility jackets and sweat-smeared faces. The plates are substantial, the atmosphere warm.

Turner, an organizer for the Unite union, gets a mug of coffee and leans over the table, describing some of the grassroots efforts to underscore how fundamental steel is to the economy. There's a Twitter campaign — #steelselfie — that asks people to take pictures of themselves with something made of steel. There are campaigns to show off things made with British steel, such as the Sydney Opera House and London's Olympic Stadium. Then there are individuals like actor Michael Sheen, who is from the area and is backing a petition to help workers.

Anything, but anything, that will keep steel in the public eye.

Turner believes the struggle will be successful. The steelworks are built around the site of a 12th century abbey, where monks once operated a forge. A wall of the abbey remains on the site, protected by a fence. There's a story that says if the wall collapses the plant will close.

"It's a solid wall," Turner said with a smile. "It's been standing for hundreds of years. I believe it will be a few hundred more."