BEIJING (AP) — The tycoon who is offering $43 billion for Swiss agrochemicals giant Syngenta keeps a low profile, but is China's most aggressive dealmaker. Ren Jianxin, chairman of state-owned ChemChina, is behind most of China's big foreign acquisitions, from Italian tire brand Pirelli to... 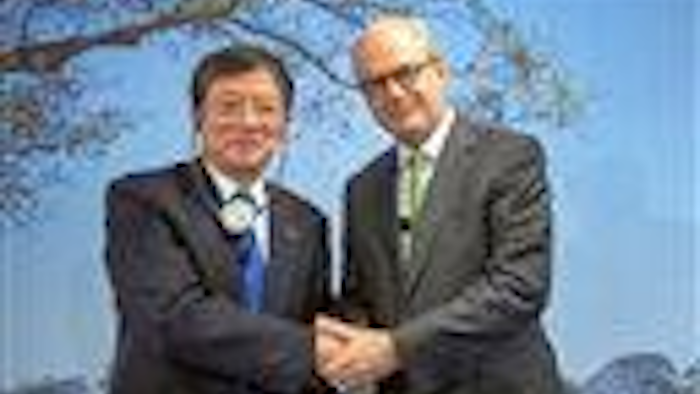 BEIJING (AP) — The tycoon who is offering $43 billion for Swiss agrochemicals giant Syngenta keeps a low profile, but is China's most aggressive dealmaker.

Since 2010, Ren has splashed out an eye-popping $63.9 billion on foreign assets, some 60 percent more than the No. 2 Chinese buyer, according to Dealogic, a financial data provider.

It is unusually ambitious, but Ren is an unusual figure — a private entrepreneur who built an empire by gobbling up more than 100 state-owned enterprises.

Its acquisitions reflect the appetite of cash-rich but young Chinese companies for foreign technology and brands. Some want to sharpen their competitive edge at home. Others want to get into more profitable global markets as Chinese economic growth slows.

Ren, 58, started out by founding a maker of solvents, Bluestar Co., with seven employees in 1984 in the northwestern city of Lanzhou, far from China's eastern industrial heartland. The Pirelli website calls him "the pioneer of China's modern cleaning industry."

Unlike other state industry managers who are career bureaucrats, Ren can draw on that experience to talk to foreign executives, said Andre Loesekrug-Pietri, chairman of A Capital, a private equity fund in Beijing. He said Ren also has recruited a handful of Western executives, bringing in knowledge of foreign business cultures.

At a news conference with Syngenta's president in February, Ren "looked like an investment banker. He talked to reporters. That makes a difference," said Loesekrug-Pietri. "They realize that today, money alone does not buy you love. It's the way you present your strategy that is key."

In the mid-'90s, Ren began taking control of a string of small government chemical producers. The state retained ownership while Ren was given management powers as the Communist Party tried to revive money-losing industries. According to news reports, he avoided layoffs by transferring idle employees to noodle restaurants owned by his company.

In 2004, the party bestowed on Bluestar's patchwork empire the elite status of a national-level state-owned enterprise. Today, it is one of 106 companies controlled directly by the Cabinet, alongside PetroChina Ltd. and China Mobile Ltd.

In another pioneering move, ChemChina sold 20 percent of a subsidiary, China National Bluestar Group, to U.S. private equity fund Blackstone Group for $600 million in 2007. The company said it was the first direct foreign investment in a Chinese state-owned enterprise.

Ren lacks the fame of e-commerce pioneer Jack Ma of Alibaba Group or of Wang Jianlin, the Wanda Group chairman who agreed in January to pay $3.5 billion for Hollywood film studio Legendary Entertainment.

Last month, Hong Kong's South China Morning Post newspaper called Ren the "mystery man" behind ChemChina. He "may be the most important dealmaker you've never heard of," the newspaper said.

Abroad, Ren's buying spree began in 2006 with Adisseo, a French maker of food additives, and Qenos, an Australian supplier of polyethylene. ChemChina bought France's Rhodia Global Silicone the next year, becoming the No. 3 producer of organic silicon.

In 2011, China National Bluestar Group paid $2 billion for Elkem, a maker of silicon and carbon parts.

ChemChina's approach shows Chinese companies are increasingly willing to pay what it takes to obtain premium brands, instead of bargain-shopping and possibly being stuck with underperforming assets.

Last year, it stumped up $7.7 billion for a majority stake in Pirelli. ChemChina already has its own tire brand, Aeolus, but it is low-priced and little-known abroad, while Pirelli commands premium prices.

Ren's first offer of 449 Swiss francs ($460) per share for Syngenta, valuing the company at about $42 billion, was rejected, according to the South China Morning Post. Citing unidentified sources, it said he raised that to 480 Swiss francs ($491), which the board endorsed.

To pay for it, ChemChina has lined up $50 billion in lending from Chinese and foreign banks, according to the business magazine Caixin.

ChemChina would gain access to Syngenta's advanced fertilizer and other agrochemical technology at a time when rising Chinese incomes are boosting demand for food, creating new profit opportunities for suppliers.

Also, taking on Syngenta could help Ren stay in charge as Beijing carries out plans to cut the total number of major state-owned companies to as few as 53 through mergers. That can end the careers of managers at companies that wind up being absorbed by bigger rivals.

"There is a race for size," said Loesekrug-Pietri. "The bigger and more international you are, the bigger the chance you will be the acquirer, rather than the target, in these mergers."

In a possible hurdle to the deal, members of the U.S. Senate agriculture committee called for a review by the Committee on Foreign Investment in the United States. Led by the Treasury Department, it looks at possible threats to national security. The lawmakers asked Treasury Secretary Jacob Lew to include the Department of Agriculture and the Food and Drug Administration in the review.

"We believe that any foreign acquisition of an important U.S. agricultural asset should be reviewed closely for potential risks to our food system," the senators said in a letter Thursday to Lew. They cited possible "consequences for food security, food safety, biosecurity and the highly competitive U.S. farm sector as a whole."