NEW YORK (AP) — Hellmann's has figured out that if you can't beat them, you might as well join them. After suing a vegan mayo maker for false advertising, Hellmann's parent company Unilever is launching its own eggless spread. The company said Tuesday that its first eggless version of Hellmann's... 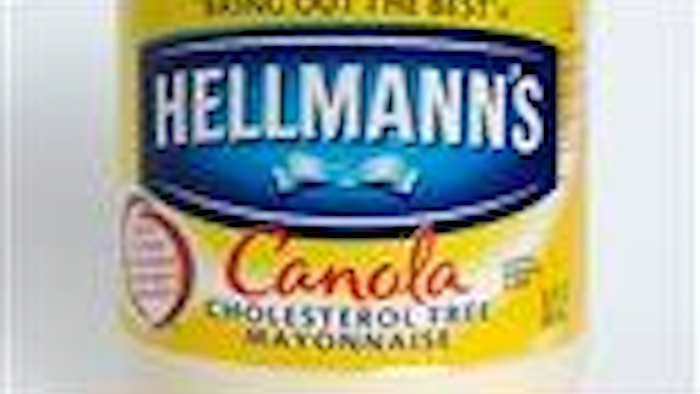 NEW YORK (AP) — Hellmann's has figured out that if you can't beat them, you might as well join them.

After suing a vegan mayo maker for false advertising, Hellmann's parent company Unilever is launching its own eggless spread. The company said Tuesday that its first eggless version of Hellmann's will hit shelves later this month under the label "Carefully Crafted Dressing and Sandwich Spread."

The cumbersome name arrives in the shadow of Unilever's public fight with Hampton Creek, a San Francisco startup that makes an eggless spread called Just Mayo. Unilever sued the company in 2014, saying that Just Mayo's name was misleading because it doesn't contain eggs, as required by the federal standard of identity for mayonnaise.

Unilever later dropped the suit after a backlash.

When asked whether Hellmann's new spread was the company's answer to Just Mayo, marketing director Russell Lilly said it was simply catering to its customers' tastes.

"What this is about is providing choices to the millions of Hellmann's fans," Lilly said. To appeal to more customers, Hellmann's is also introducing its first organic mayonnaise this month.

Hellmann's, known as Best Foods in some regions, is by far the country's No. 1 mayonnaise though its share slipped slightly to 46.6 percent, from 46.9 percent in 2014, according to market researcher Euromonitor International.

Although Unilever ended up dropping its lawsuit against Hampton Creek, the case made the labeling of "mayonnaise" and "mayo" a surprisingly contested affair. Soon after the legal tussle made headlines, it was discovered that Unilever was editing own website so that some references to "mayonnaise" were changed to "mayonnaise dressing." It turns out that some Hellmann's own products wouldn't qualify as mayonnaise either under existing guidelines.

Even after Unilever dropped its suit in the face of a backlash, the mayonnaise saga would not die.

Prompted by an anonymous complaint, the Food and Drug Administration sent a warning letter to Hampton Creek last summer saying Just Mayo's name was misleading because of its lack of eggs. The parties eventually worked out an agreement that allowed Just Mayo keep its name, in exchange for a few label adjustments to make it clearer that it did not contain eggs.

In a phone interview, Hampton Creek CEO Josh Tetrick said he isn't threatened by Hellmann's latest product, and that such options from major food companies will help create a bigger market for plant-based alternatives.