Poll: Support for raising the smoking age in Washington

OLYMPIA, Wash. (AP) — Legislation that would raise Washington's smoking age to 21 has more support than keeping the legal age to buy tobacco at 18, according to a new poll released Wednesday. The survey of 500 voters by independent pollster Stuart Elway says 65 percent of voters back hiking the... 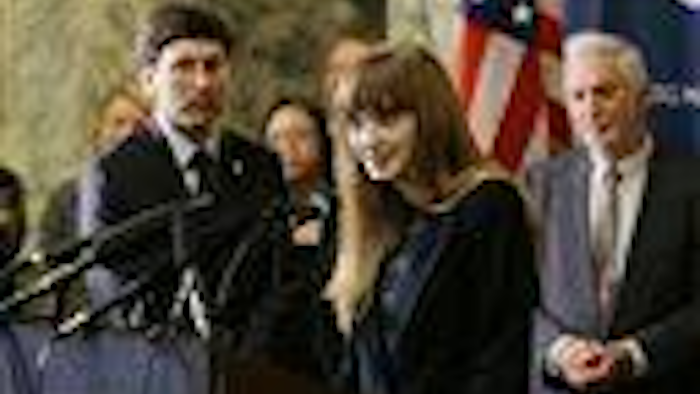 OLYMPIA, Wash. (AP) — Legislation that would raise Washington's smoking age to 21 has more support than keeping the legal age to buy tobacco at 18, according to a new poll released Wednesday.

The survey of 500 voters by independent pollster Stuart Elway says 65 percent of voters back hiking the smoking age to 21, while 35 percent oppose a potential raise. The survey of 500 registered voters was taken Dec. 28-30 and had a sampling error margin of plus or minus 4.5 percentage points.

The Elway poll was announced at a news conference by state Attorney General Bob Ferguson, who called on lawmakers to pass legislation he requested to raise the state's legal age to buy tobacco from 18 to 21.

"Let's be blunt, cigarettes are too easy to get if you're a minor," Ferguson said. He said his legislation would make it harder for teenagers to get cigarettes because it would not be as easy for people who are 18 to 20 to sell them to underage people.

Hawaii recently became the first state to raise its smoking age to 21, although the trend hasn't caught on yet in other states.

In Olympia, an effort last year to raise the smoking age didn't get a hearing in the Senate. This year, the Senate version of the bill sponsored by Sen. Mark Miloscia, R-Federal Way, hasn't been scheduled for a hearing in the Senate's Commerce and Labor Committee, but committee chair Sen. Michael Baumgartner, R-Spokane, previously said he would consider hearing the bill.

In New Jersey on Tuesday, Gov. Chris Christie didn't act on a bill that would have hiked the state's smoking age to 21, keeping it at 19. Some cities, including New York and Boston, have raised their smoking age to 21.

Still, Ferguson says Washington must follow Hawaii's lead to save lives and reduce how much money the state spends to treat smoking-related illness.

The House version of the bill, House Bill 2313, has its first hearing Wednesday. Both bills have bipartisan sponsorship.

Advocates for raising the smoking age trumpeted health studies at the news conference to boost their case.

A 2015 study from the National Institute of Medicine says lifting the smoking age to 21 would reduce the smoking rate by about 12 percent and would lower smoking-related deaths by 10 percent over time.

About 90 percent of adults that become daily smokers say they started smoking before 19, the study says.

Some lawmakers opposed to the bill have voiced concerns that government shouldn't limit freedoms of people old enough to vote or serve in the military.

The bills under consideration in Washington would also ban people under 21 from buying vaporizing devices and electronic cigarettes. A person who sells or gives tobacco or tobacco products like e-cigarettes to people under 21 would face a gross misdemeanor. Underage people caught with tobacco wouldn't face penalties.

The state Office of Financial Management estimated that raising the smoking age to 21 would cost the state $22 million in the 2017-19 budget cycle because of the anticipated loss of tobacco tax revenue.