Digital imaging specialists recently created a 3D printed bust and life mask of Obama, which will become part of his presidential depictions in the National Portrait Gallery collection. 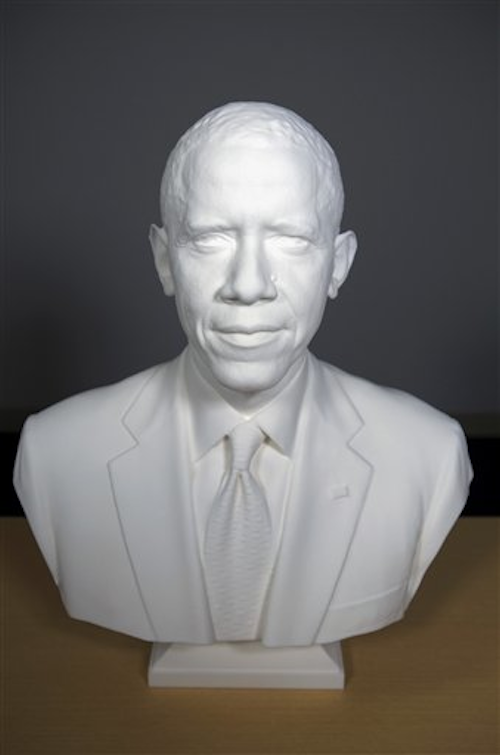 WASHINGTON (AP) -- A team at the Smithsonian Institution has scanned President Barack Obama to create the first 3D printed portrait of a sitting president.

Digital imaging specialists recently created a 3D printed bust and life mask of Obama, which will become part of his presidential depictions in the National Portrait Gallery collection. Both were shown Wednesday at a gathering of inventors, entrepreneurs and students at the White House.

The Smithsonian team scanned Obama earlier this year using two distinct 3D processes. Experts from the University of Southern California used their "light stage" face scanner to document the president's face from ear to ear. The team also used hand-held 3D scanners and cameras to record 3D data to create a bust of the president.

The bust was 3D printed using a laser to melt plastic together in 5,000 layers. It took 40 hours to print, and because it's plastic, the material will be durable over time, said image specialist Adam Metallo.

Lifelike masks are nothing new, of course, though the technology is. Plaster masks were created of George Washington and Abraham Lincoln's faces during their lives, and they are kept in the Smithsonian collection.

"We were really inspired by our experience with the Lincoln life masks," said Gunter Waibel, director of the Smithsonian's digitization program.

The group has made 3D scans and prints to replicate the original Lincoln masks from early and late in the Civil War. They have proven especially popular with school groups using the Smithsonian's 3D scans.

"There's a very, very deep connection that gets made when you have accurate data of a person's face and that person was a part of history," Waibel said. "People really felt the Lincoln life masks deeply spoke to them and connected them to a place, a time, a life and ultimately a legacy of the 14th president."

But past presidential masks were created through plaster casting that required a president to sit with plaster on his face, breathing through straws stuck in his nose. So the Smithsonian set out to update that process with 21st century technology to make it fast and easy.

The team proposed a scan of Obama about a year ago, and the White House agreed. Obama joined them for about 15 minutes in the White House. The actual scanning took about 5 minutes. The result was a 3D scan of the president at a higher resolution that is currently possible to print in 3D.

"You can see down to the wrinkles in the skin and the pores on his face," said Vince Rossi, a 3D imaging specialist.

For centuries, artists have used the latest technology to create imagery of leaders, whether it was busts chiseled out of marble, paintings or photographs.

"We think we've really added a new genre to portraiture," Waibel said. "It will be fascinating to see how that will be picked up and how down the line other administrations will also use that particular tool."