The research aims to develop faster submarines with reduced water resistance and quieter propellers, Japanese defense officials said earlier this week. But the joint research will not necessarily lead to the sale of Japanese submarines to Australia. 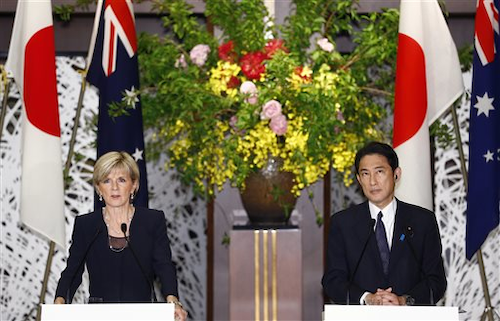 The submarine technology was a top item at talks among the nations' foreign and defense ministers in Tokyo and was included in an agreement to step up cooperation in defense equipment and technology.

Defense Minister Itsunori Onodera told a joint news conference after the talks that the ministers agreed to begin the research next year. It will focus on technology that is applicable to any vessel including submarines, he said, but declined to give further details.

"I have high expectations for successful results," he said. Onodera said the research and possible technology transfer would not violate Japan's pacifist constitution.

The research aims to develop faster submarines with reduced water resistance and quieter propellers, Japanese defense officials said earlier this week. But the joint research will not necessarily lead to the sale of Japanese submarines to Australia, which is exploring purchasing submarines from Germany and France as well.

The research, however, widens the possibility of Japan supplying military technology overseas. The Abe government in April eased Japan's self-imposed limits on military exports, paving the way for its largely domestic defense industry to go global. Japan has also agreed to develop hazmat suits with Britain, and is seeking to export search and rescue aircraft to India.

Abe says the U.S.-Japan alliance remains central to his security policy, but has widened defense cooperation with Britain, France, India and several Asian-Pacific nations, particularly Australia, amid an expansion of Chinese military activities in the region and concern that budget pressures may reduce America's presence.

He is trying to ease constitutional restraints so Japan's military can use force not only in Japan's own defense but also to defend foreign troops.

Onodera has said Australia has a strong interest in Japan's submarine technology. Johnston is expected to tour a Japanese Soryu-class submarine at Yokosuka naval port, south of Tokyo, during his visit.

The 2,950-ton diesel-electric submarine is the most advanced model in Japan's fleet of 16 submarines. It comes with air-independent propulsion technology acquired from Sweden, and is armed with torpedoes and Harpoon missiles.

"We would like the Australian side to closely look at Japanese defense equipment so we can build an even more cooperative relationship between Japan and Australia," Onodera told reporters last Friday.

Australia is also in talks with Germany and France about a 40 billion Australian dollar ($37 billion) plan to replace its Collins-class submarines.