Troubled smartphone maker BlackBerry has won an early round in its legal battle against an iPhone keyboard made by a startup co-founded by "American Idol" host Ryan Seacrest. 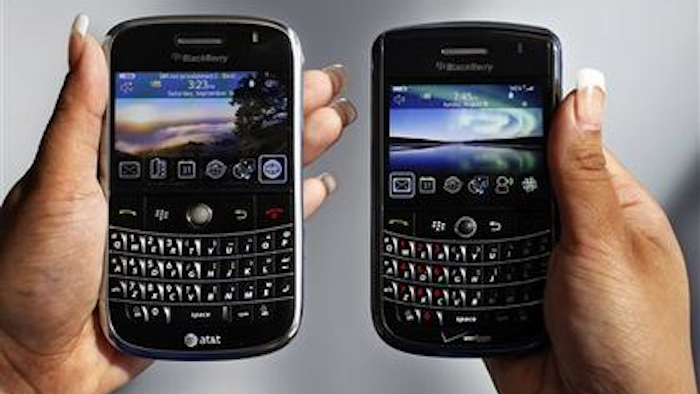 SAN FRANCISCO (AP) -- Troubled smartphone maker BlackBerry has won an early round in its legal battle against an iPhone keyboard made by a startup co-founded by "American Idol" host Ryan Seacrest.

A court order bans Seacrest's company, Typo Products LLC, from selling its iPhone keyboard in the U.S. while BlackBerry Ltd. proceeds with a patent infringement case against the product. BlackBerry contends Typo Products ripped off the design from the physical keyboards used for typing on BlackBerry's phones.

U.S. District Judge William Orrick in San Francisco ruled that BlackBerry is likely to prove its infringement claims against Typo Products and would be damaged if the sales of the $99 iPhone keyboard were allowed to continue.

The ban could be lifted later in the case if Typo Products prevails in its claims that its iPhone keyboard isn't based on any of BlackBerry's patented designs or technology.

"This ruling will help prevent further injury to BlackBerry from Typo's blatant theft of our patented keyboard technology," BlackBerry said in a statement.

Typo Products said it plans to appeal Orrick's ruling. "Typo will continue to make and sell innovative products that busy people can't live without," the Los Angeles company said in a statement.

In court papers, Typo Products warned that it might go out of business if it was not allowed to keep selling its iPhone keyboard.

Seacrest started Typo Products with entrepreneur Laurence Hallier last year. The iPhone keyboard went on sale in January as an alternative to typing on a touch screen.

But those phones have been waning in popularity since Apple Inc. released the first iPhone in 2007, threatening BlackBerry's survival. As its losses have mounted, BlackBerry's market value has plummeted from more than $80 billion in 2008 to less than $5 billion today.

The Canadian company is trying to bounce back by focusing more on its software than its smartphones under CEO John Chen, who took charge last year. BlackBerry lost $5.9 billion in its last fiscal year ending March 1.