The Fender Stratocaster, first produced in 1954, has been described as a guitar that changed the world. When it first arrived, its streamlined, space-age contours seemed strange and perplexing to some. But the kids knew what to do with it. 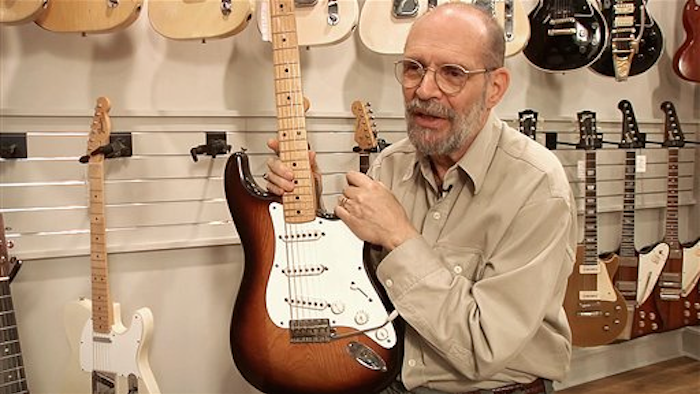 NASHVILLE, Tenn. (AP) — George Gruhn's guitar shop in Nashville is a kind of mecca for fine, vintage musical instruments, but even Gruhn is blown away by the latest addition to his inventory. He says it's the very first production model Fender Stratocaster ever made.

You can own it for a cool quarter million dollars.

The sunburst-finish Strat bears the serial number 0100. Although some Strats have lower numbers that begin with 0001, Gruhn says they actually were manufactured later in that first year of production. He says the number-one Strat was sold to an amateur who evidently took good care of it.

"This one didn't go to a famous performer," he said. "It actually went to Joe Blow Public. But it stayed in good condition, hardly used. And then, a bit over 30 years ago, Richard Smith, who is a curator today at the museum of the city of Fullerton, Calif., where this guitar was made, bought this guitar."

Smith purchased the guitar from the original owner. Gruhn said the record-keeping on the guitar is superb because Smith is considered one of the foremost experts on Stratocasters. Smith is selling it on consignment through Gruhn's Guitars.

The Fender Stratocaster, first produced in 1954, has been described as a guitar that changed the world. When it first arrived, its streamlined, space-age contours seemed strange and perplexing to some. But the kids knew what to do with it. Buddy Holly played one. So did Jimi Hendrix, when he transformed the psychedelic experience into sound a decade later. Bob Dylan chose a Stratocaster for his revolutionary electric set, when he fired a defiant shot at tradition during the 1965 Newport Folk Festival.

And 60 years after it was created, the much copied design of the Stratocaster has hardly changed.

According to Gruhn, Stratocasters are the single most popular, best-selling electric guitars on the planet.

However, Gruhn says the very first production model Strat is something like a national treasure.

He added, "I think it belongs in a museum ultimately. On the other hand, I don't like to see them put in a museum setting where they will never again be touched without white gloves. Even for the Stradivari quartet at the Library of Congress, it does get played. They don't play those instruments every day, but they are used for concerts. And this instrument is a wonderful sounding guitar. It plays great."