The Japanese capital is home to many modern creations: high tech, animation, youth fashion. But in the small crafts shops crowding the area known as Yanasen, you can watch artisans preserving traditional crafts, or updating them. Yanesen (a combination of three neighborhood names, Yanaka, Nezu, and... 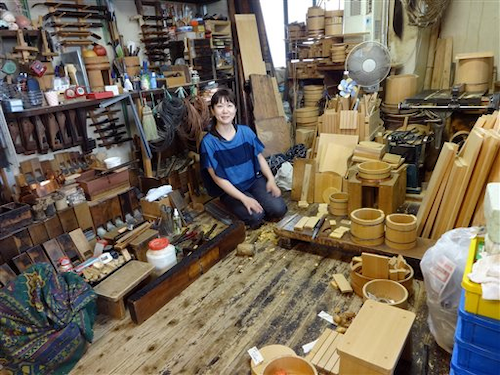 The Japanese capital is home to many modern creations: high tech, animation, youth fashion. But in the small crafts shops crowding the area known as Yanasen, you can watch artisans preserving traditional crafts, or updating them.

Yanesen (a combination of three neighborhood names, Yanaka, Nezu, and Sendagi) is in Tokyo's old downtown. Some of its shops go back generations, while others are new.

On the Yanaka Ginza shopping street, Midori-ya, in business since 1908, sells items handmade from bamboo, include chopsticks and baskets, as well as more modern cell-phone charms, earrings and figurines. Farther down the street, a tiny storefront houses the young artists of Ito Manufacturing, who hand-print T-shirts with their own illustrations and make custom hanko. A hanko is a personal seal traditionally used instead of a signature; Ito gives it an up-to-date twist with cute illustrations of animals, including pandas, a French bulldog and a cat drinking beer.

In many of the neighborhood shops you can see the craftspeople at work. At Shibata Shoten, look past the display of paper lanterns and you'll see lantern painter Keiichi Shibata at his work table. The shop, started by his great grandfather, has been in business for about a hundred years in various locations around the neighborhood. It used to make paper umbrellas, for which there's little demand nowadays. The lanterns can be painted with a customer's name and family crest, and while Shoten says the samples on display are his mistakes, you'd never know it to look at them.

Then there's the woodworking shop Ito Furoten, which started out making wooden baths around 1925 (furo-ten means "bath shop"). Azusa Miyahara, the fifth-generation owner, says not many women do this kind of work, but her father had only daughters, so he passed the business on to her 10 years ago.

The tradition of soaking in a bath is still strong in Japan, but tubs now are often made of other materials. So while Miyahara still makes wooden ones on order, the shop has branched out to include trays, vases, stools and other items. Passers-by can watch her at work, surrounded by tools and materials.

Other neighborhood shops feature items made of fabric or paper; perhaps the best show is one that uses sugar. Amezaiku — the craft of making elaborate candy figures individually by hand — used to be a common traditional entertainment. Now, it's a rare skill.

At candy-maker Amezaiku Yoshihara, you can buy a ready-made item, including variations on the shop's rabbit mascot, or pick a creature from a catalog to be custom-made on the spot. The craftsperson takes a glob of sugar syrup, adds a drop of coloring and — using only fingers and a small pair of steel scissors — quickly works it into a detailed little creature. He has only a few minutes before the sugar hardens.

"Children who watch the magical event of the candy being made stare open-mouthed," says the shop's English flyer, but when I watched Takahiro Yoshihara pull the sugar into the legs and horns of a Japanese rhinoceros beetle, the kids weren't the only ones gaping.