One of the many characters in Melville’s Moby Dick is Bulkington, an intrepid sailor for whom “land seemed scorching to his feet” and who on a “shivering winter’s night” thrust the mighty ship Pequod’s “vindictive bows into the cold malicious waves,” as it set out on its fatal whale hunting expedition. Bulkington would be right at... 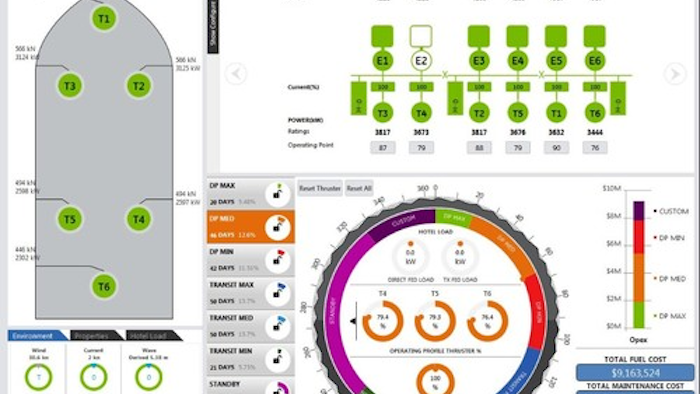 One of the many characters in Melville’s Moby Dick is Bulkington, an intrepid sailor for whom “land seemed scorching to his feet” and who on a “shivering winter’s night” thrust the mighty ship Pequod’s “vindictive bows into the cold malicious waves,” as it set out on its fatal whale hunting expedition.

Bulkington would be right at home on modern drill ships. The oil industry uses these vessels to drill deep subsea wells as far as 100 miles from shore. They spend months on the open ocean, weathering gales while trying to stay pinned to one spot on heaving seas.

“When you are drilling, you need to stay where you are,” says Paul English, a marine leader at GE’s Power Conversion business. “Coming off the wellhead because you’ve lost position could be very expensive and also very risky.” English’s business is developing sophisticated navigation and electrical systems that allow energy companies to keep their drill ships within a 15-foot radius, even on stormy seas. But matching the best electrical and wiring design with the right thrusters and propellers has been a laborious process lasting on average 16 hours, spread over several months.

Not anymore. Over the last two years, engineers at the GE unit developed a new software system that can do the same job in just one hour and fits on a laptop. It can even predicts operational costs.

The software is one outcome of simplification, a company-wide culture shift taking hold at GE. Simplification, says GE Chairman and CEO Jeff Immelt, is about delivering results to customers faster, at a lower cost and making them more competitive. Immelt says that simplification is also helping GE reduce the time it takes to introduce a new product by a third and cut the deal cycle in half. The technology that tells vessels where they are and helps them stay put is called dynamic positioning (DP). It includes a combination of high-tech navigation systems such as GPS, ultrasonic beacons and lasers.

The systems  feed the navigation data to the DP’s big computer brain for processing. An array of thrusters and propellers listen to the brain’s commands, compensate for ocean current, waves and wind, and keep the ship in the right place.

GE makes the DP technology. It also helps customers with the design of the ship’s electrical systems and the distribution of the thrusters and propellers along the ship’s hull (see the two pictures above).

For decades, developing these designs has been a prized skill. A small group of specialized engineers sitting in an industrial office in Rugby, England, would use a dedicated computer and software to help customers pick the right thrusters for various sea conditions and calculate how much power they’ll need.

“We would give them the results and wouldn’t hear anything back for two months,” says Jonathan Childs, one of the engineers trained to operate the system. “But we wanted to become more involved, get faster and become a trusted advisor,” Childs says.

Two years ago, Childs talked to English about trying something new. His plan was straight out of GE’s simplification playbook. Childs proposed rewriting the software, liberating design system from the Rugby office, and moving it instead to a laptop he could bring to customers anywhere in the world. The system allows GE engineers to work collaboratively with customers in real time by providing multiple equipment comparisons and electrical configurations. “If a customer wants to work in 3 knots of current and 30 knots of wind in the North Sea, we can help him chose the right drive and the right voltage in one hour,” Childs says.

Customers now know very quickly what their options are, and the system turns them into educated buyers when the start shopping for propulsion equipment. (GE makes power distribution systems for ships, but it has only a limited offering of propulsion technology.)

Childs says that the current version of the software is still close to a minimum viable product, to borrow language from Lean Startup pioneer by Eric Ries. (GE has collaborated with Ries and David Kidder to help develop FastWorks, a simplification program designed to foster a startup mentality inside the company.)

But he is already working on the next version that “intends to add the meat to the bones” by recommending the generation voltage, switchboards and specific drive types from GE’s portfolio.

Childs says that dozens of customers have already taken the VesPA for a spin, and several large ship builders want to see how it works. Drill ships designed with the system’s help could soon start battling North Sea swells between Norway, Greenland and Canada.

Sounds like the perfect for place for some modern Bulkington.