Chinese President Xi Jinping landed in the Indian prime minister's home state of Gujarat on Wednesday for a three-day visit expected to focus on India's need to improve worn out infrastructure and reduce its trade deficit. Xi was greeted on the tarmac by a throng of news photographers and state... 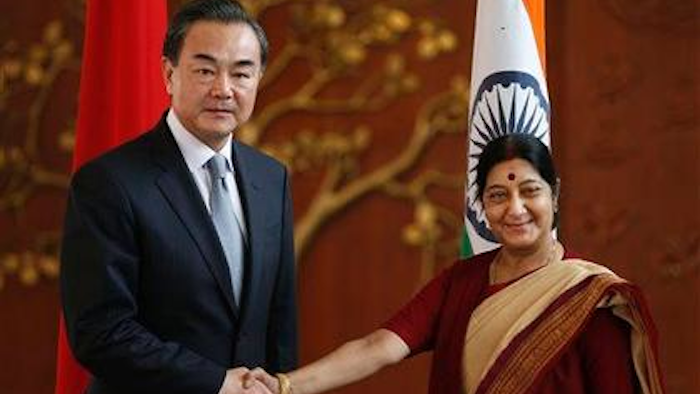 Chinese President Xi Jinping landed in the Indian prime minister's home state of Gujarat on Wednesday for a three-day visit expected to focus on India's need to improve worn out infrastructure and reduce its trade deficit.

Xi was greeted on the tarmac by a throng of news photographers and state officials carrying fringed umbrellas to guard him from the sun in Gujarat's main financial city of Ahmedabad.

Prime Minister Narendra Modi is expected to court Chinese business and seek investment to upgrade creaky infrastructure, banking on China's track record at building highways, railways, and industrial zones. India is also eager to address the imbalance in their annual trade, which now totals around $65 billion but is skewed toward imports of Chinese electrical equipment and parts.

Modi and the Gujarat government are staging a lavish welcome for Xi, with billboards across Ahmedabad showing a smiling Modi and Xi. A banquet dinner was being held Wednesday night on the banks of the Sabarmati River in Ahmedabad. Modi was also celebrating his 64th birthday.

Xi has been equally effusive in expressing excitement for the visit.

"China-India relations have become one of the most dynamic and promising bilateral relations in the 21st century," Xi wrote in a letter published Wednesday in The Hindu newspaper.

The choice of Gujarat as Xi's first stop in India, rather than the capital New Delhi, marked a departure from protocol that some saw as a sign of warming ties between China and India. Relations had been tested by a decades-old border dispute and fears of China's growing military and economic might. Xi will meet officials in New Delhi on Thursday.

Earlier this week, Xi visited Sri Lanka and Maldives, both traditional allies of India who have unnerved New Delhi by growing closer to Beijing.

Modi appeared to be unbothered by those visits, alluding Tuesday to ancient Sino-Indian ties dating back to a Chinese Buddhist monk, Xuan Zang, who spent time in Modi's village in Gujarat in 600 AD.

India, with its 1.2 billion population surpassed only by China's 1.4 billion, has also long aimed at becoming the next massive cheap labor economy. Modi has pledged to streamline business and build up industry to make that happen.

"India and China today constitute almost 35 percent of the world's population. From a purely arithmetic point of view ... that they decide to work together will open big gates for progress and development in the world," Modi said.

But not everyone in Gujarat was excited about the Chinese leader's visit.

Traders and small business owners have grown increasingly nervous about the calls for warmer relations and increased trade between India and China, fearing they'll be sidelined by Chinese competitors.

"We need to tread with care since China is a global manufacturing hub itself, which sees us as a market for their goods," said Bhagyesh Soneji, chairwoman of the Gujarat branch of the Associated Chambers of Commerce and Industry of India.

He hoped the two leaders would take "one small step at a time to ensure that there is no threat to the nascent local industry."

Small business leaders said industries such as pharmaceuticals, solar panel manufacturing, software, and agriculture were already struggling to compete with Chinese companies who were benefiting from subsidies and soft loans.

But for India's vast numbers of poor, there are some clear benefits from Chinese imports.

"For the poor among the consumers, if it lasts a year and serves their basic needs, it is more than enough," Kamdar said. "Patriotic concerns don't weigh heavily on the minds of people living by the day."