The robot's quill runs across the paper scroll, from right to left, scribbling down ancient Hebrew letters with black ink. It is penning down the Torah, the Jews' holy scripture, and it is doing it much faster than a rabbi could because it doesn't need to take breaks. 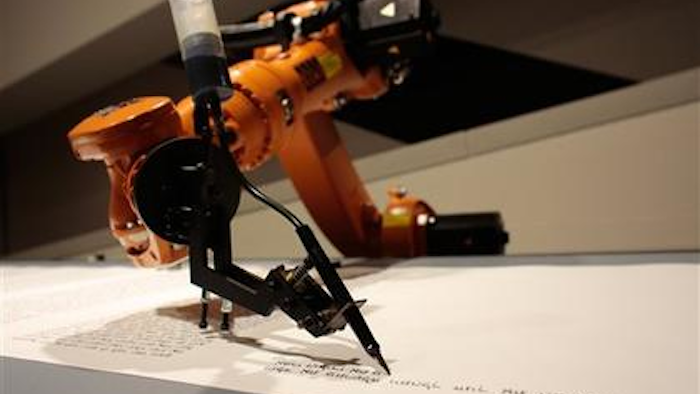 BERLIN (AP) -- The robot's quill runs across the paper scroll, from right to left, scribbling down ancient Hebrew letters with black ink. It is penning down the Torah, the Jews' holy scripture, and it is doing it much faster than a rabbi could because it doesn't need to take breaks.

The Torah-writing robot was developed by the German artists' group robotlab and was presented for the first time Thursday at Berlin's Jewish Museum. While it takes the machine about three months to complete the 80-meter (260-foot) -long scroll, a rabbi or a sofer — a Jewish scribe — needs nearly a year. But unlike the rabbi's work, the robot's Torah can't be used in a synagogue.

"In order for the Torah to be holy, it has to be written with a goose feather on parchment, the process has to be filled with meaning and I'm saying prayers while I'm writing it," said Rabbi Reuven Yaacobov. The Berlin rabbi curiously eyed the orange-painted robot as it ceaselessly wrote down the first book of Moses. Yaacobov then showed visitors the traditional way of writing the Torah the way it's been done for thousands of years.

Matthias Gommel from robotlab said the robot initially wrote down the Christian Bible in German, Spanish and Portuguese before it was reprogrammed with the help of an Israeli graphic designer.

Both the robot and the rabbi are part of the exhibition "The Creation of the World" about the significance of Hebrew handwritings in Judaism. The show also presents Hebrew scrolls, wedding contracts and other medieval documents from the Braginsky Collection. The robot will be on show through January 2015 — the rabbi and the scrolls will only be there until Aug. 3.