Overflowing Tank Cause Of New Leak At Fukushima

Another day, another radioactive-water spill. The operator of the meltdown-plagued Fukushima Dai-ichi nuclear plant says at least 430 liters (110 gallons) spilled when workers overfilled a storage tank without a gauge that could have warned them of the danger. 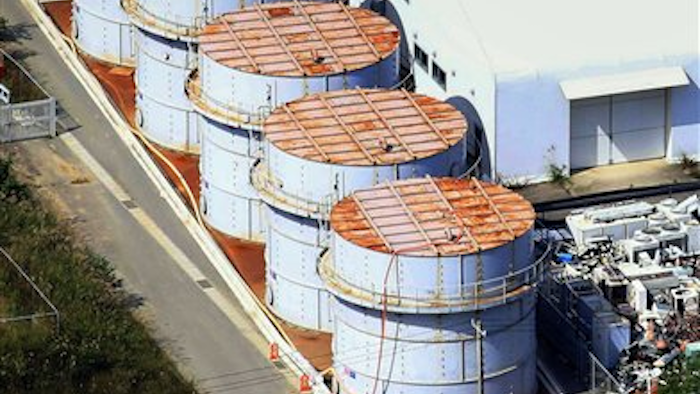 TOKYO (AP) -- Another day, another radioactive-water spill. The operator of the meltdown-plagued Fukushima Dai-ichi nuclear plant says at least 430 liters (110 gallons) spilled when workers overfilled a storage tank without a gauge that could have warned them of the danger.

The amount is tiny compared to the untold thousands of tons of radioactive water that have leaked, much of it into the Pacific Ocean, since a massive earthquake and tsunami wrecked the plant in 2011. But the error is one of many the operator has committed as it struggles to manage a seemingly endless, tainted flow.

Plant operator Tokyo Electric Power Co. said Thursday workers detected the water spilling from the top of one large tank when they were patrolling the site the night before. The tank is one of about 1,000 erected on the grounds around the plant to hold water used to cool the melted nuclear fuel in the broken reactors.

TEPCO said the water then spilled out of a concrete barrier surrounding the tank and believed that most of it reached the sea via a ditch next to the river. The company later said, however, radiation levels in sea water samples taken just off the plant's coast remained below detectable levels.

The new leak is sure to add to public concern and criticism of TEPCO and the government for their handling of the nuclear crisis. In August, the utility reported a 300-ton leak from another storage tank, one of a string of leaks in recent months.

That came after the utility and the government acknowledged that contaminated groundwater was seeping into ocean at a rate of 300 tons a day for some time.

TEPCO spokesman Masayuki Ono told an urgent news conference Thursday that the overflow occurred at a 450-ton tank without a water gauge and standing on an unlevel ground, slightly tilting toward the sea. The tank was already nearly full, but workers pumped in more contaminated water into it to maximize capacity as the plant was facing a serious storage crunch. Recent rainstorms that flooded tank yards and the subsequent need to pump up and store contaminated rainwater also added to the shortage, he said.

"We could have, and should have, prevented the overflow," he said.

TEPCO said the tank and four others in the same area were already filled up to 98 percent of its designed capacity, as in many other tanks elsewhere on the plant.

Tetsuro Tsutsui, an engineer and expert of industrial tanks, said the latest problem was emblematic of how TEPCO runs the precarious plant. He said it was "unthinkable" to fill tanks up to the top, or build them on a tilted ground without building a level foundation.

"That's only common sense," Tsutsui, also a member of a citizens group of experts proposing safety measures for the plant. "But that seems to be the routine at the Fukushima Dai-ichi. I must say these are not accidents. There must be a systematic problem in the way things are run over there."

Experts have faulted TEPCO for sloppiness in its handling not only of the water management but also in other daily operations. A list of mishaps just over the past few weeks:

—On Oct. 2, some 4 tons of contaminated rainwater leaked when workers pumped it into a wrong tank that was also nearly full, causing most of it seeping into the ground.

—On Sept. 27, a water treatment machine failed hours after resuming a test-run following months-long repairs, clogged up by a piece of rubber lining that got mistakenly left inside the unit. The rubber fragment has since been removed, with the unit back in operation.

—On Sept. 19, a fire-fighting water pipe got damaged during debris removal operation, with 300 liters of water spurting out of it.

Experts have faulted TEPCO for sloppiness in its handling of the water management, including insufficient tank inspection records, lack of water gauges, as well as connecting hoses lying directly on the grass-covered ground. Until recently, only one worker was assigned to 500 tanks in a two-hour patrol.

In recent meetings, regulators criticized TEPCO for even lacking basic skills to properly measure radioactivity in contaminated areas, and taking too long to find causes in case of problems. They also have criticized the one-foot (30-centimeter) high protective barriers around the tanks as being too low.

So far, the leaks have occurred in easy-to-assemble rubber-seamed tanks that TEPCO had built quickly to accommodate swelling amounts of contaminated water, and the plant has promised to replace them with more durable welded tanks, which take more time and cost more to build. TEPCO has been criticized for building shoddy tanks to cut cost.

"As far as TEPCO people on our contaminated water and sea monitoring panels are concerned, they seem to lack even the most basic knowledge about radiation," said a Nuclear Regulation Authority commissioner Kayoko Nakamura, a radiologist.

"I really think they should acquire adequate expertise and commitment needed for the job," she said.