The impoverished nation of 60 million people emerged from a half-century of isolation and brutal military rule two years ago. With most international sanctions against the country lifted or suspended, foreign businesses from Coca-Cola and Unilever to Suzuki Motors have scrambled to get in. 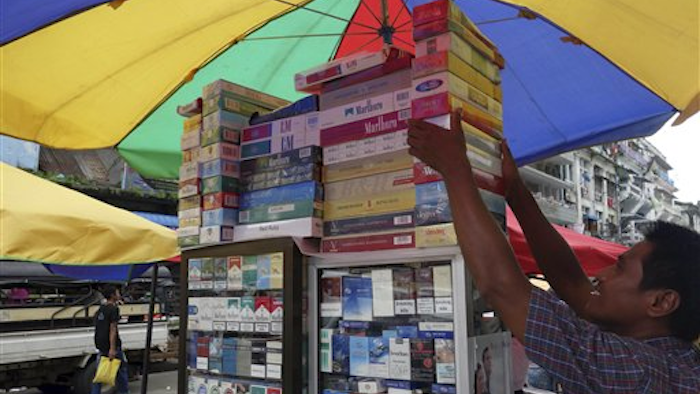 YANGON, Myanmar (AP) -- As some of the world's biggest companies trumpet their arrival in Asia's hottest frontier market, the tobacco industry has a different strategy: It's slipping into Myanmar without fanfare.

The impoverished nation of 60 million people emerged from a half-century of isolation and brutal military rule two years ago. With most international sanctions against the country lifted or suspended, foreign businesses from Coca-Cola and Unilever to Suzuki Motors have scrambled to get in.

So too has Big Tobacco but without the ribbon cuttings or grandly worded press announcements.

British American Tobacco, the world's second largest cigarette manufacturer, shepherded a select audience of government officials to a low key ceremony last month where it formalized a $50 million investment over five years to produce, market and sell its brands in Myanmar. Its factory, to be built on the outskirts of Yangon, will create about 400 jobs.

Japan Tobacco, No. 3 globally, quietly inked a deal nearly a year ago with local partner tycoon Kyaw Win. Company spokesman Royhei Sugata said a factory was being built, but refused to discuss details, from the project's scale or brand name to the plant's location.

"They seem to think by entering the market stealthily, they can avoid public scrutiny," said Tin Maung, a retired army major and Myanmar's top anti-smoking campaigner.

In a country where roads in many places are almost unnavigable and power outages constant, the nominally civilian government is hopeful that foreign investment will create new jobs and help speed development. But other priorities such as health, the environment and public welfare are sometimes swept aside.

Nang Naing Naing Shane, who heads the Ministry of Health's National Tobacco Control Program, said the Health Ministry's strong opposition to BAT, JT and others was overridden by the Myanmar Investment Commission. The commission's director quit under a cloud of suspicions about graft, but tobacco investment approvals were not overturned.

Awareness about the health hazards is low, tobacco controls are weakly enforced, and the anti-smoking lobby is effectively a one man act.

Over the last six decades, 89-year-old Tin Maung has written hundreds of articles in magazines and state-run newspapers, travelled to symposiums inside the country and out, and visited schools to warn youth about the dangers of smoking — funding all of his endeavors on his own.

Like many Myanmar youth, he was only 10 when he took his first drag, so he knows how easy it is to be drawn in. It wasn't until two decades later, when he picked up a Reader's Digest and read an article spelling out the dangers posed by smoking that he stopped.

A large proportion of the population smoke but only a fraction of them reach for filtered cigarettes.

According to a 2007 World Health Organization survey, 45 percent of all men smoke or chew tobacco. The rates for women and teenage boys are 8 percent and 13 percent respectively.

BAT's chief executive Nicandro Durante, said on the company's website that BAT, returning 10 years after it was forced to leave because of controversial links to the abusive military, was "truly excited" to be back. It was also "keen to play an active part in the country's economic and social advancement," he wrote.

The tradition of smoking cigar-like "cheroots" — made from finely chopped up tobacco leaves, stems and wood chips, tamarin and other flavors — starts young in Myanmar, often a boy helping his father light up.

While many people know smoking is bad for health, few fully understand just how bad.

"I heard that smoking can be harmful, but not everyone who smokes gets cancer," said Khin Cho, a 37-year-old housewife, who smokes cheroot at home and cigarettes in public. "I am okay now and I don't want to worry about something that hasn't happened yet."

Even at the over-crowded cancer ward in Yangon's main hospital few patients who landed there because of tobacco understood the links to the deadly disease until it was too late.

"I had no idea," said 60-year-old Hla Soe, a chronic smoker for more than half a century, a drip dangling from his right arm. "I'm from a village. I didn't quit until a year ago when I found out I had lung cancer."

Myanmar ratified the WHO tobacco treaty a few years ago, but laws and controls regulating the sale, marketing and use of tobacco products are poorly enforced.

Selling to minors is illegal, but boys 12 or younger can regularly be seen buying loose cigarettes from street side vendors.

Local companies use gimmicks to get around bans on advertising. Tay Za, one of the country's richest tycoons who is famous for his stable of luxury cars, places $5 or $10 bills lottery-style inside some of the packs of his brand.

Tobacco giants who bring with them decades of marketing experience and skills honed at capturing smokers for a lifetime are also in a strong position to exploit legal loopholes.

Under existing regulations, for instance, tobacco companies can promote their name by offering scholarships to children, sponsor community projects or using social networking sites such as Facebook.

"It's also the only country in the region that still does not require pictorial warnings on cigarette packs," said Tara Singh Bam, a technical adviser on tobacco control at the International Union against Tuberculosis and Disease after wrapping up his second visit to the country since it opened up.

At the moment, only around 5 percent of the smoking population uses filtered cigarettes, according to WHO.

"We expect the economy to boom and a growing middle class to emerge with more disposable incomes," she said. Together with the existing pervasiveness of smoking, "this gives plenty of room for tobacco companies to focus on targeting the middle class and teenagers with cheap cigarettes."

"We can expect to see walls of cigarette packs at check-out counters and more prominent display panels of new brands the companies will introduce with attractive packaging."

This all terrifies Tin Maung, the 89-year-old anti-smoking campaigner, who considers Big Tobacco the biggest fight of his life.

"Money can shut the mouth of many and I anticipate a very steep uphill battle with my anti-smoking campaign."