The company and some Muslims say the polish is the first of its kind because it lets air and moisture pass through to the nail. A craze has built up around it with Muslim women in recent months after an Islamic scholar in the U.S. tested its permeability and published an article saying that, in his view, it complies with Muslim law. 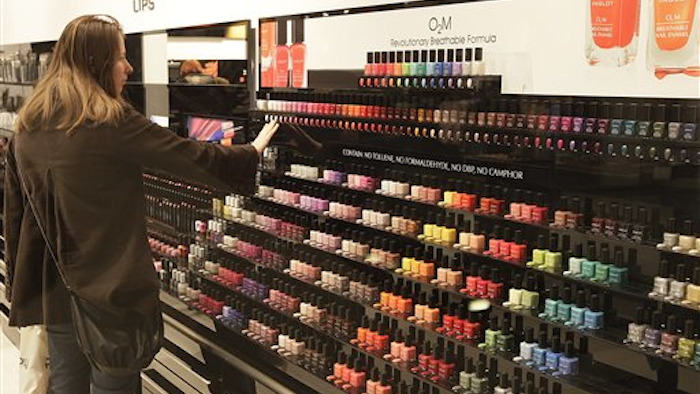 PRZEMYSL, Poland (AP) -- For Zaida Saleh, like for many observant Muslim women, manicures have long posed a religious problem.

With prayers five times a day, and a pre-prayer ritual that requires washing the hands and arms, traditional fingernail polish has been mostly off limits because it prevents water from making contact with the nails.

A new "breathable" nail polish by a Polish company, Inglot, is changing that.

The company and some Muslims say the polish is the first of its kind because it lets air and moisture pass through to the nail. A craze has built up around it with Muslim women in recent months after an Islamic scholar in the United States tested its permeability and published an article saying that, in his view, it complies with Muslim law.

"It's huge," said Saleh, a 35-year-old who hadn't polished her nails in many years but immediately went out and bought the product in five colors, including a bright pink, a burgundy and a mauve. "I am excited. I feel more feminine — and I just love it."

The news of Inglot's breathable polish has in recent months spread quickly from woman to woman and over the Internet. It also has given Inglot a boost in sales of the product, called O2M, for oxygen and moisture.

The nail polish now stands as one of the final life achievements of Wojciech Inglot, a Polish chemist and entrepreneur who developed it to create what he billed as a healthier alternative to traditional nail enamels, which block the passage of moisture and oxygen to the nail. He died suddenly on Saturday at the age of 57 after suffering internal hemorrhaging, and is being laid to rest on Wednesday in his hometown of Przemysl.

Inglot has been the recipient of several business leadership awards for taking an enterprise that he started in 1983, when Poland was still under communist rule, and turning it into an international success. A Polish award he received last year praised him for "proving that Poland is a country where innovative technologies go hand-in-hand with beauty." Today his company has shops in almost 50 countries, including one at Times Square in New York City and boutiques in malls from Moscow to Istanbul to Dubai.

Though the Muslim holy book, the Quran, does not specifically address the issue of nail polish, some Islamic scholars have said that water must touch the surface of the nail for the washing ritual to be done correctly.

Some Muslim women might put nail polish on after finishing the last prayer of the day before going out, and then take it off again before dawn prayers. They can also wear it during their periods, when they are excused from the prayers, but some find it embarrassing to do so because it could signal they are menstruating. Some simply don't want to take the trouble of getting a manicure that won't last long.

"It was a big headache for me to put it on only for five days, so I didn't wear it for a long time," said Saleh, who was born in Sri Lanka but now lives in Anaheim, California, where she is a teacher of preschool and kindergarten level children. "This was a huge breakthrough for me. We are supposed to cover up, but nowhere does it say 'don't be fashionable.'"

Nobody was more surprised by the splash it made with Muslims than Inglot himself.

"I don't think there is a single Muslim living here," Inglot said in an interview with The Associated Press nine days before his death at his factory in Przemysl, near the border with Ukraine. "We didn't even think about this."

Inglot began about four years ago to develop the formula for the breathable enamel, which uses a polymer similar to that in the newest generation of contact lenses.

Inglot said the chemical formula is "tricky" and "quite expensive" to produce, and that the profit margin on O2M is not high. However, he said he was determined to develop a breathable polish knowing that consumers are ever more focused on health and expecting them to welcome a varnish that would let the nail breathe.

He said the enthusiastic Muslim reaction to the product began after an Islamic scholar, Mustafa Umar, published an article on his blog in November declaring it permissible. The result was a "serious increase in the sale" of O2M. Inglot said the company was unable to immediately meet all requests for orders, but that the phenomenon was so fresh that he didn't yet have any figures on sales.

"But it looks very promising," Inglot said. "We were very surprised and very happy with that."

Umar, director of education and outreach with the Islamic Institute of Orange County in California, said he decided to study the matter because Muslim women had already been discussing the product in online forums. There was uncertainty over whether it would be ritually compliant, and they weren't getting any answers.

"So I decided to go ahead and write an article on this because I know how important it is for Muslim women around the world," Umar said.

The research involved putting the O2M polish and a standard polish on coffee filters, letting them both dry, and then putting water drops on top of each and seeing if the moisture seeped through. In the case of the traditional nail polish it did not, but it went through the O2M polish and even wet a second filter below.

Umar said he has gotten an enthusiastic reception to his opinion from women — not only because they are reveling in the chance to accessorize with colorful varnishes.

"Usually when men give a religious ruling or verdict, they tell women that something is not allowed," Umar, 31, said. "They felt so good that someone was finally telling them 'you are allowed to do this.'"

There are still some outstanding questions, however, about how breathable the nail polish will be if multiple coats are used — say a clear bottom coat, two layers of color plus a top coat, as is common.

Before his death, Inglot was working to answer this question and gather other data on the product. The company's other managers are deep in mourning over losing Inglot but plan to continue that effort. Inglot had insisted on having more data before he felt he could responsibly promote the varnish as being compliant with Islamic law.

Islam has multiple schools of thought and no universally agreed-upon figure — such as the pope of the Roman Catholic church — to issue final rulings on religious legal interpretation. So it's not clear if all Islamic scholars would agree on O2M's permissibility, or on whether wearing nail polish at all is compatible with Muslim notions of modesty.