At least one group, called Defense Distributed, is claiming to have created downloadable weapon parts that can be built using the increasingly popular new-generation of printer that utilizes plastics and other materials to create 3-D objects with moving parts. 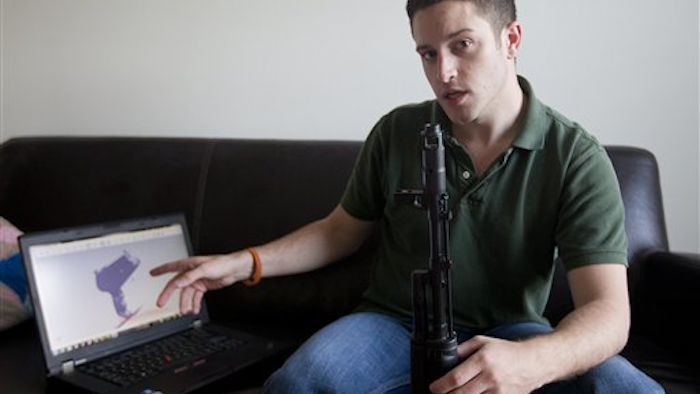 SAN FRANCISCO (AP) -- Downloading a gun's design plans to your computer, building it on a three-dimensional printer and firing it minutes later. No background checks, no questions asked.

Sound far-fetched? It's not. And that is disquieting for gun control advocates.

Rep. Steven Israel, D-NY, said the prospect of such guns becoming reality is reason enough for the renewal of the Undetectable Firearms Act, which makes illegal the building of guns that can't be detected by X-ray or metallic scanners. That law expires at the end of 2013.

At least one group, called Defense Distributed, is claiming to have created downloadable weapon parts that can be built using the increasingly popular new-generation of printer that utilizes plastics and other materials to create 3-D objects with moving parts. University of Texas law student Cody Wilson, the 24-year-old "Wiki Weapons" project leader, says the group last month test fired a semiautomatic AR-15 rifle — one of the weapon types used in the Connecticut elementary school massacre — which was built with some key parts created on a 3-D printer. The gun was fired six times before it broke.

Though no independent observer was there to verify the test, a short video clip showing the gun firing and breaking was posted to YouTube. Federal firearms regulators said they are aware of the technology's gun-making potential, but do not believe an entire weapon has yet been made.

"What's chilling is that last month a group of kids used a 3-D printer to actually manufacture (key parts) of the AR-15 and fire six bullets," Israel said. "When the (act) was last renewed in 2003, a gun made by a 3-D printer was like a Star Trek episode, but now we know it's real."

Even with gun control pushed to the top of the national political conversation, Wilson is steadfast about reaching his goal of making a fully downloadable gun. This weekend, he and his partners plan to print four new lower receivers — the segment of the gun that includes the trigger, magazine and grip. He keeps three of these AR-15 parts — one black, one white and another green — in his tidy student apartment in Austin, TX.

While saddened by the Connecticut mass killing, Wilson said Thursday that protecting the right to bear arms by giving everyone access to guns is more important in the long term than a single horrible crime.

"Clearly what happened in Connecticut was a tragedy," he told The Associated Press. "Still, by affording the Second Amendment protection, we understand events like these will happen."

He said he discussed with his partners whether they should suspend their effort, and they all decided it was too important to stop.

Wilson acknowledged there still are many technical hurdles to creating a complete gun from a 3-D printer and provided no estimate on when his goal might be reached.

Special Agent Helen Dunkel of the federal Bureau of Alcohol, Tobacco, Firearms and Explosives, which helps enforce gun laws, said the agency is familiar with Wilson's project. She didn't offer an opinion but noted there is nothing illegal about making many types of guns at home. Exceptions would be high-powered weapons like machine guns and those not detectable by airport scanners.

Advances in 3-D printing technology are fueling Wilson's goal. The printers were developed for the automobile, aerospace and other industries to create product prototypes from the same hard plastics used in toys like Legos. Hobbyists mainly use the printers to design Christmas ornaments, toys and gadget accessories.

Prices on the machines have fallen as the consumer market grows, leading to a surge in interest from people in the so-called "maker" scene. Low-end 3-D printers can now be purchased online from between $1,500-$4,000. The more high-end printers needed to make gun parts are still priced from $10,000 and up.

"The gun issue is something that the 3-D printing industry will have to address going forward," Glenn said.

Right now, most people interested in 3-D printing rent time on one. There are a number of businesses and co-ops in major cities that allow access to the machines for a nominal fee. At San Francisco's TechShop, which features a 3-D printer for its members, "assembling firearms is strictly prohibited and our staff is trained on that policy," company spokeswoman Carrie Motamedi said.

Wilson acknowledged his idea has met resistance from those active in 3-D printing.

"The early adopters of 3-D printing technology seem to be an educated, more liberal group who were against firearms to begin with," he said. Wilson said some are worried the gun project might spur regulations that will hurt or curtail their projects.

Early schematics created by Wilson's group were posted on Thingiverse, a Brooklyn, N.Y.-based website that serves as a hub for 3-D printing aficionados. After the school shooting, Thingiverse took down Wilson's links.

The site's spokeswoman Jenifer Howard said its focus is "to empower the creative process and make things for good." Howard said Thingiverse's terms of service state that users cannot use the site to share content that contributes to the creation of weapons.

Wilson said the group has already posted the links on its own website.

He said the technology exists now for a highly motivated group to make a plastic gun on a 3-D printer that could avoid airport scanners. But the equipment is still too expensive for most people.

"Nobody right now needs to worry about the bright teenager making a gun on a printer in their bedroom," he said.