The New Momentum Behind Virtual Reality

The concept of virtual reality has been around for decades — brought to us theoretically more by the creative minds of Hollywood than those of science. But what if virtual reality were to become more of an actual reality? 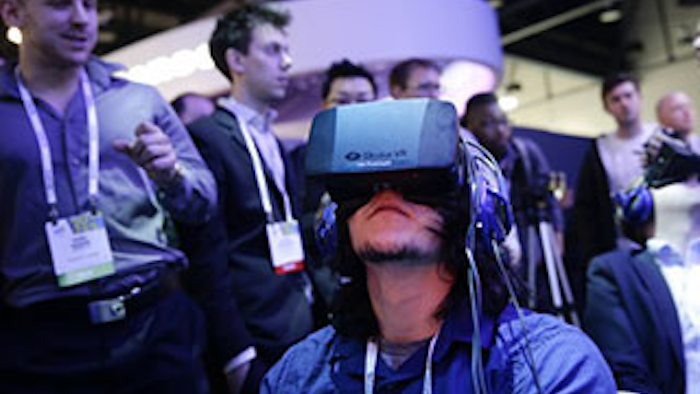 The concept of virtual reality has been around for decades — brought to us theoretically more by the creative minds of Hollywood than those of science. But what if virtual reality were to become more of an actual reality?

Facebook said Tuesday that it would purchase virtual reality firm Oculus VR for $2 billion. This announcement from Facebook, well-known for its high profile acquisitions in the tech sector, comes on the heels of a $40 million investment — shared with Tesla’s Elon Musk and Apple — in Vicarious FPC, a secretive artificial-intelligence company.

But back to reality for a moment… the virtual kind.

According to CNN, Facebook’s new company Oculus makes the Oculus Rift headset, which covers your eyes and immerses you in a virtual environment that responds to your head movements. Rift was launched in 2012, and the first Oculus Rift sold on crowdsource-funding site Kickstarter for $300. “The Rift has demoed at tech industry events to rave reviews, though it isn't yet available to consumers,” said CNN, who also quoted CEO Mark Zuckerberg as saying Facebook isn't "going to try to make a profit off the devices long term."

Sony is also getting into the virtual reality game, with its recently announced virtual reality headset known as "Project Morpheus." Additionally, Microsoft filed a patent over the summer that “reveals plans for augmented reality glasses that combine facial recognition with voice commands, seemingly ideal for multi-player gaming (not a Google Glass competitor),” says the tech site Mashable. “The drawings depict sensors on the front and sides, which would supposedly collect information like eye tracking.”

While it seems like gaming will receive the lion’s share of the benefits of this type of technology, it’s interesting to try to imaging the business ramifications. Think of the ways in which virtual training or product development could cut costs and increase safety. Or, perhaps virtual reality could reduce or eliminate the need to travel for meetings.

And yet, I’m still not sure I’m ready. Is it just me, or is there something a little unnerving about some of these technologies? As digital access becomes more available and cost effective, are we becoming increasingly isolated?

What are your thoughts on virtual reality? Leave your comments below.