How One Toy Maker Is Addressing the Skills Gap

K’NEX Brands has dedicated a large focus of its company to improving STEM education and recruiting the next generation to manufacturing jobs. All of this while working to reshore as much production as possible. 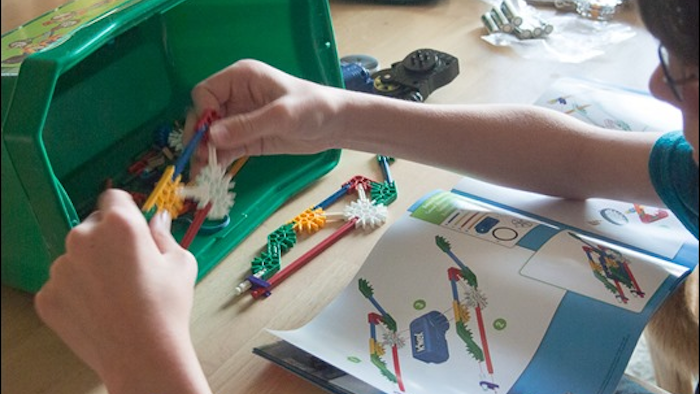 The skills gap is a serious problem facing America and it has most politicians and manufacturers very worried. But how do we even start to address such a daunting problem that’s crippling our workforce and economy? One company’s answer is with toys.

K’NEX Brands, the maker of the iconic construction toys, has dedicated a large focus of its company to improving STEM education and recruiting the next generation to manufacturing jobs. All of this while working to reshore as much production as possible.

In the U.S., public education has seen a long-sliding de-emphasis on science, technology, engineering and math (STEM). And the lack of emphasis is shockingly apparent. In the major education assessment known as the nation’s report card, only about one-quarter of U.S. high school seniors performed solidly in math in 2013. These results are not only embarrassing as a country, but they highlight the concern that graduating students are not prepared for college or the workforce.

According to Michael Araten, president and CEO of K’NEX Brands, work is being done nationally to change the core curriculum of schools to re-emphasize math and science as foundations. “We’re seeing school districts around the country, from the national level all the way down to the very local level, put STEM coordinators in their classrooms and in their districts,” he says.

He adds that in some ways, this new focus has been driven by the business community. Businesses, including K’NEX, need a pipeline of people who have core STEM skills. But it’s not just manufacturers that need these skills. Everything from designing apps for smartphones, to running Google Analytics for a marketing firm, requires a strong foundation of math and science.

At K’NEX they are taking short- and long-term approaches to address the skills gap and talent pipeline problems.

For the long-term, K’NEX has developed a line of STEM education sets with corresponding curriculum to be used with pre-K through 12th grade classrooms. The kits operate on the show-and-tell model of learning. A teacher can explain the physics of centripetal force to group of students, but for some of them it takes the act of building a roller-coaster to fully understand – and believe – that the rider won’t fall out.

“Whether it’s teaching preschoolers the life cycle by telling them about a butterfly and then building the butterfly, or building the DNA molecule and talking about what the different segments of it can do, you can have a powerful ability to really embed the knowledge and then inspire kids to go into the field,” Araten says.

Obviously, K’NEX can’t wait for all of the kids to grow up, graduate and join the workforce, so they’ve implemented short-term initiatives to attract qualified workers.

The company has started its own apprenticeship program and summer internship program by partnering with local community colleges and trade schools to ensure that they have access to the area talent pool. They also formed a consortium of about 200 manufacturers in the region to create “buying power.”

“We can go to these schools collectively and say we need hundreds if not thousands of people a year, and we want you guys to tell your student population and parents that there are jobs out there, that they’re good paying jobs, and do an awareness campaign that manufacturing in the 21st century is very different than manufacturing in the 19th century,” he explains.

But Araten understands that even with these initiatives, there’s a lot of work to be done and the struggle to find qualified, eager workers will continue.

“I fully acknowledge that not every child is going to go into a STEM field, but as a country we have a huge gap between the number of people we need in those fields and the number of people graduating with those skills,” he says. “If we can impact even some fraction of that, I feel very lucky to be able to make the country even a little bit stronger.”

K’NEX has also been getting press for its reshoring efforts, as it brings jobs back from China. According to Araten, the biggest obstacle in this endeavor has been replicating every element of the supply chain. “The big advantage beyond labor costs that China has to offer is that they’ve built themselves as a turn-key solution,” he says. “You can come with a drawing or a concept, and they would figure out how to make it happen and you would just get whatever you ordered 6 months later.”

As the company brought its production back to the U.S., it had to learn how to replicate elements of the supply chain efficiently so that they could remain cost competitive at retail. The biggest challenge that’s left for the company, Araten says, is the highly decorated pieces, which are still imported from China, because they are so difficult to automate. “We’re very pleased with the progress we’ve made, but we’ve still got some work to do get to 100 percent in the United States.”

Like many companies, K’NEX hopes to produce as close to the consumer as possible. North America is a very important market for K’NEX products, and they’d love to make 100 percent of the merchandise for North America in the U.S. The company also distributes to 37 other countries, and Araten says it might make sense for them to have an operation in Asia for Asian consumers. This is very similar to the models many large manufactures, like auto companies, are employing.

The Role of Government

“I think manufacturing is an important core competency for a nation to control its own destiny,” says Araten. “It’s the ability to make things and not rely on others for the things you need – like a stable energy supply, food supply and workforce. They are the essential building blocks of a strong nation.”

To incentivize more American manufacturing, Araten believes that government has a role to play. Some of these responsibilities, as he sees them, are on the training and education side, where government has already committed dollars to community colleges to create curriculum that businesses need.

“On the fair trade side, there are a fair amount of disadvantages between the U.S. and a lot of other countries,” he says. “Having real free trade is something that could incentivize production here.” He also believes government can help to alleviate the massive capital investments that manufacturers often need to make. “I think there is an opportunity to look at the R&D tax credit and other tax credits, and increase accelerated depreciation at higher amounts so that it is easier for companies to make the multimillion dollar investments they need to be competitive globally.”