The Skills Gap and Why We Need a Modern Rosie 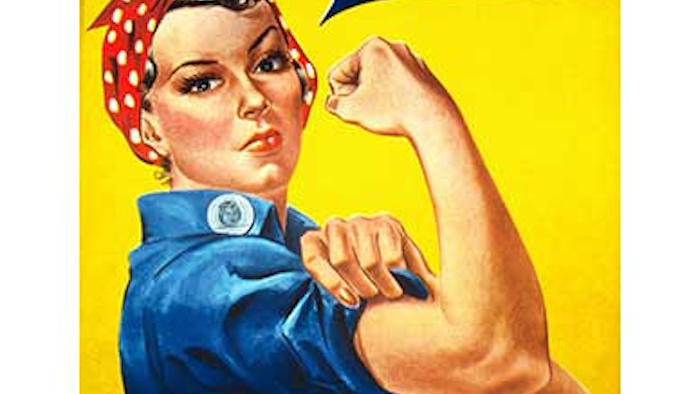 Women make up half of the U.S. population and almost half of the workforce, but only 24% in the manufacturing sector.

The manufacturing field is full of opportunities on the cutting edge of technology and innovation. Manufacturers in the United States perform two-thirds of all private-sector R&D. Manufacturing is the backbone of the American economy—according to the National Association of Manufacturers, the industry supports an estimated 17.4 million jobs and has the highest multiplier effect of any economic sector, adding $1.32 to the economy for every $1 spent.

The Manufacturing Institute’s Untapped Resource: How Manufacturers Can Attract, Retain, and Advanced Talented Women notes that women earn more than half of the associate’s, bachelor’s, and master’s degrees in the country, and that women hold more than half of all managerial and professional positions. In addition to the skills that the American population of women bring to the table, “research indicates that organizations with diverse leadership are more profitable.” A Catalyst study found that Fortune 500 companies with high percentages of women officers had a 34% higher total return than companies with fewer women executives. Women are not inherently superior to men, but a diverse group allows for more ideas, more perspectives—and more profits—than a group of only men or only women.

Manufacturing needs to attract more women, but this is easier said than done.

Combatting the false stereotypes that keep women from pursuing the STEM and other manufacturing-related fields is as daunting as combatting sexism itself. There are several small steps we can take, however: we can vocally encourage several steps that would help young girls reject the existing stereotype that technical fields are for boys, like increasing girls’ exposure and interest in technical fields. By vocally supporting the effort to bring shop classes back to school and the success of things like the PBS show SciGirls, we can begin to chip away at the root of the issue.

Manufacturing companies have a more direct influence over the recruitment of female employees to the sector, however. A huge issue is that women in manufacturing are not visible. A prominent theme throughout the WiM Summit was the idea that if young women can see it, they can be it. Think of a woman in manufacturing. Chances are, you pictured Rosie the Riveter. We simply don’t have another image.

In Rebecca Winson’s article for The Guardian on the image of Rosie the Riveter, she points out that 60 years after Rosie’s conception, she is still the “most visible icon of a working woman…Isn’t it time we found a new Rosie, a realistic representation of what it’s like to be a woman and work today?” But where does this new image come from? That realistic representation—and those role models that are so important for attracting women to manufacturing—are the women currently achieving in the manufacturing industry.

Girls need a frame of reference for women in manufacturing that doesn’t date back to their grandparents’ time—something more relevant to their lives and interests. So, manufacturing companies: next time your plant or facility hosts a tour for a school, maybe suggest that a woman leads the tour.

In her presentation at the WiM Summit, Chandra Brown, Deputy Assistant Secretary for Manufacturing for the U.S. Department of Commerce, encouraged women in manufacturing to become more visible: “as women, you need to be up front and visible. When my old company used to do shop tours, I used to lead a lot of tours, especially when we had the high schools come in. Was I super busy? Yes, granted, I was. But it is that important. It doesn’t matter if you have women when they are hidden, right?” By taking deliberate steps to increase the visibility of women in manufacturing, every plant can slowly begin to make a change and show young women that they, too, can hold a career in the manufacturing sector.

Manufacturing is one of the most exciting and diverse industries available to job seekers, and it is failing to attract a vast resource—women. The false stereotypes that discourage girls and women from pursuing careers in STEM and manufacturing will not disappear overnight. Taking small steps—both as citizens and as manufacturing companies—to support better education for girls and better representation of women in the manufacturing industry, may lead to a brighter future for America’s women, manufacturing sector, and economy.