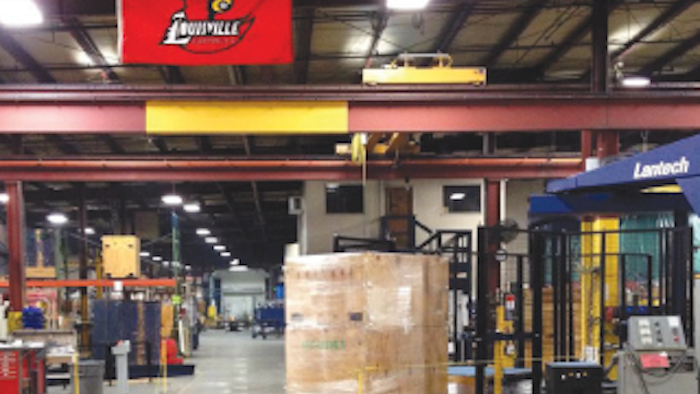 Pat and Bill Lancaster believed that pallet loads of product could be better protected — that billions of dollars of unsalable product due to shipping damage could be reclaimed and energy spent recycling, repurposing, or disposing of this damaged product could be regained. Pallet loads could be better stabilized and product should be — and could be — better protected in transit. Thousands of man hours, spent loading products onto a truck one box at a time, could be regained.

The elasticity of plastic was the answer. Layers of stretched plastic film could encase pallet loads, stabilizing and containing the products and ensuring a safe journey to its final destination.

Testing proved their concept of ‘stretch wrapping’ worked. The passion to perfect their product grew, it was introduced to the packaging industry in 1973, and a dinner table discussion turned into the world’s first stretch wrapping machine.

“It’s a classic American rags to riches story,” says Jim Lancaster, CEO of Lantech. “[My father] came up with this idea of unitizing a load by rotating it in film. He built a machine to do that and sold it. And that gave him enough money to make the next one, and off to the races he went.”

A leader in packaging equipment manufacturing, Lantech credits its focus on innovation for its success the last 40 years. Alongside Lean manufacturing and a commitment to its customers, Lancaster says, “The business was really wrapped around innovation from the very beginning.”

Major innovations in the stretch wrapping equipment industry can be traced back to Lantech — including the first stretch wrapper, the first automatic stretch wrapper, and the first horizontal wrapper. Lantech currently holds 360 patents, and its patent rate “is at its highest rate it’s ever been on an annual basis.”

But innovation isn’t the only contributor to Lantech’s success, explains Lancaster: “It’s a combination of innovation; productivity, efficiency, speed, and quality; and then taking really good care of the customers after they’ve got the machines.”

“We support every single machine we’ve made,” says Lancaster. “We’ve got a dedicated group of people making parts to keep customers running no matter how old the machine is, as well as a huge inventory of parts that we can ship out the same day we receive an order.”

To drive its production efficiency and quality, Lantech looks to Lean as a way to not just solve its own production problems but also those of its customers. “Lean is really a business philosophy,” says Lancaster, “it’s an important leg of the stool that’s kept us successful for so long.”

What sets Lantech apart from the competition is the fact that its employees are spending 30 to 40 percent of their creative energy problems solving, says Lancaster, and the rest of their energy is spent on making Lantech’s products better — safer, higher quality, lower cost, quicker. “They go home feeling like they really made a difference, rather than go home frustrated that they had to use all their energy to solve the same problem today that they did last week.”

And part of solving these new problems is fixing them so they don’t happen again, Lancaster explains: “We track any number of quality measures on a daily basis and any time a quality measure goes down for the day, we try to figure out why.” For example, a product moving through the paint line might need to be positioned on the paint cart in a certain manner as it moves through the powder booth so that the correct thickness is applied uniformly. If on inspection, any part is painted incorrectly, instead of a worker touching up the paint job every time and disregarding the problem until it came around again in a month, “we go back and look at why,” says Lancaster. The painter discovered the cart was hung incorrectly. “So what we do then is we figure out how to change the hanger design so you can’t hang it the wrong way.” Regardless of why the part was hung incorrectly — whether it was because a new employee was on the line or the part was new—the solution ensures that the same problem can no longer happen. “It’s very different than going back and coaching the paint guy to not hang it the wrong way, that process of problem solving only lasts as long as that guy remembers or until the next guy starts that job,” explains Lancaster. “If you actually change the way the work is done so that the work design itself ensures it’s done right, now you’ve fixed it for good.”

“People are only going to buy equipment from us to the degree that it does what they need it to do,” says Lancaster. To be sure the company is creating a product that is geared toward solving customer problems, Lancaster frequently visits the plants that are utilizing Lantech’s stretch wrapping equipment. “We go watch customers using our equipment and just see what the problems are going on in the back of their factories,” he explains, and “what kind of things can we do to make their world better.

“Low maintenance machines, or in our case, no maintenance [machines],” are one example of how Lantech is focused on making its customers’ lives better. “In the lion’s share of places, the maintenance people are so overwhelmed by the problems of the day, they don’t get to the routine maintenance,” Lancaster explains, and only provide maintenance to a machine once it can no longer run. Using belts instead of chains and using sealed-for-life bearings are just two ways Lantech creates a low to no maintenance wrapper.

Another passion of the company is to create an easy-to-use wrapper, one that is “very easy and intuitive,” explains Lancaster. Many people are operating a stretch wrapper on their first day of work, he adds, and Lantech’s job is to create a machine they’re able to safely and effectively operate through simple functions and intuitive buttons. Oftentimes, Lantech will bring in operators from outside the company, show them a new machine, and ask them to operate it. New machines are alpha tested at a customer’s site — and Lancaster is there to watch how successfully the customer is able to set up and operate the machine with no instruction. “You can learn a lot by watching them try to figure it out,” explains Lancaster, “and then you can make it more intuitive.”

Lancaster and his father still spend a considerable amount of time in customers’ facilities, watching, observing, and learning. “I look for waste,” says Lancaster, “and I look for hard and tedious work.” He often finds a considerable amount of “wasted movement,” where workers are continuously moving items only to move them again later, accomplishing nothing except for the movement of that object in the process. They add cost instead of value and also create opportunities for product damage with every move.

And watching a worker stretch wrap a load by hand provides a “very different” view of it versus simply hearing about it. Watching a worker walk around a pallet, stooping down to apply film to the bottom of the load, and then extending his arms to the top of the load all while pulling and walking backwards—“you realize what a crazy thing that is from a safety perspective,” says Lancaster.

“I’m sitting there watching what people are doing,” he adds, “literally watching their movement. And seeing if what they’re doing is actually adding value to the product.”

“One of the biggest disconnects that I see when I go to factories is that production is measured on is how much they get out on time,” Lancaster says. The sales department often will discover how much damaged product the customer receives, or sends back, but “the feedback loop on the quality of what gets wrapped and shipped in these factories doesn’t reach the workers who wrapped and shipped that product.” And that causes the focus in the factory to be about throughput much more than the quality of the stretch wrapped load, explains Lancaster, leaving many managers unaware of the cost of poor stretch wrapping to their businesses.

“About one percent of the consumer goods that are shipped in the U.S. are unsalable for one reason or another,” explains Lancaster. “Half of that percent of that is unsalable because of damage sustained during shipment because of poor stretch wrapping. And that half of a percent is just a massive number.

“We’re talking billions of dollars a year of product that is unsalable,” he adds, “because we couldn’t get it there successfully.”

The first thing companies can do to address this problem, Lancaster stresses, is to get a feedback loop going, so the wrappers and the shippers know what’s happening to their products once the truck pulls away from the loading dock. And so they know how they can truly reduce shipping damage.

“There’s a misconception out there about what really holds a load together,” Lancaster says. “What holds a load together is load containment force —  the amount of squeeze on the load by the stretch film that’s holding it together.” Many believe that the number of revolutions of film applied to a load is what protects it, but that simply isn’t true. “The number one biggest determining factor of whether a pallet load is going to get to the other end or not is how much squeeze force we have on it,” stresses Lancaster. And as a packaging industry provider, part of Lantech’s job is to provide this sort of education to an industry that is quickly evolving.

“There’s a dramatic amount of change going on,” Lancaster says of the packing industry. “The combination of the environmental or green movement, sustainability, resource reduction, and cost reduction has caused the primary package to get a lot weaker.” For example, ten years ago a bottle of water was made from thicker plastic than today’s water bottles — and was also shipped in a full corrugated case. Today’s much thinner water bottles are shipped with no tray or substrate, shrink bundle stacked on a unit load with no tier sheets. Nothing is holding stacking strength except for the bottle itself.

“The corrugated case that holds almost everything that’s shipped today has gotten a lot weaker,” adds Lancaster. “We don’t want that to translate into more damage that goes into the waste stream.” Today’s reduced package materials means that the quality of the stretch wrapped load is more important than ever.

“There were a lot of pallet loads 20 years ago that you could really ship with or without stretch wrap and they would still get there either way,” Lancaster says. “Today, stretch wrap is far more important to hold it together.