Nothing Run-Of-The-Mill For Tool And Instrument Manufacturer

Edgecam’s ability to drive machines from a variety of manufacturers, across the range of cutting technologies that Thomas Keating uses, with a range of controllers including Fanuc, Heidenhain, Fagor and Agie, makes it what Dr. Wylde calls “one of our core enabling technologies,” playing a vital role in producing the components which contributed to their Queen’s Award. 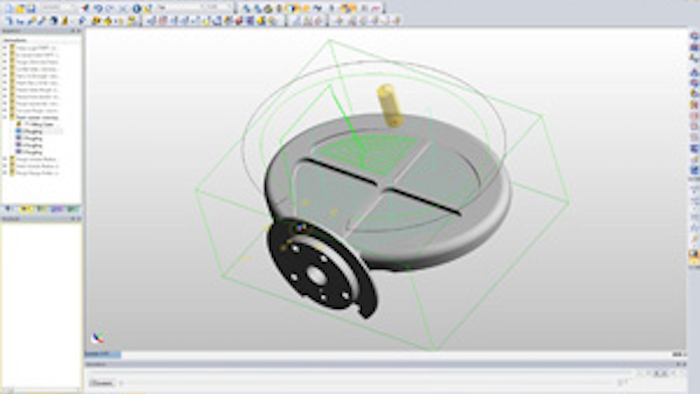 Operating in a “niche within a niche” is how the managing director of a tool maker and manufacturer of precision scientific instruments – some of which are currently operating in space, one-and-a-half-million kilometres away from Earth – describes his company.

Dr. Richard Wylde says Thomas Keating Ltd. has “no single competitor on the planet doing what we’re doing overall.” That is because their craft-based skills associated with being a long-standing tool maker. Couple that with physics-based intellectual property and their extensive range of machines and software, and they focus on a worldwide, but very small, market. That approach won them a 2012 Queen’s Award for Enterprise for International Trade.

“We’ve spent the last 30 years developing a company that can now compete successfully with high-tech businesses around the world, supplying internationally-leading scientific projects with the equipment they need,” said Wylde.

The operation of manufacturing a variety of scientific instruments which function in the specialist terahertz range, lying between microwaves and infra-red, is in addition to their precision mould-making business, manufacturing press tools, gauges and injection moulds.

With a plant list of over 50 CNC and manual machines, observers could be forgiven for thinking the company must have something to suit their every requirement. But they have recently called on the market-leading CAM software Edgecam to enable a Moore CNC Jig Grinder to undertake various tasks.

“By programming the jig grinder with Edgecam we have turned it into a fully-functioning, ultra-precise, milling machine with resolutions down to 15-millionths of an inch, which is about 0.4 of a micron,” said Wylde. “In a temperature-controlled environment, and with resolutions down to the sub-micron level, we can use this machine for particular applications for some of our space products. Because of the modifications we’ve made to it, this is the only machine of its type in the world.”

While running the jig grinder as a mill is just a run-of-the-mill task for Edgecam, it is equally at home driving the company’s DMG, Bostomatic, Matsuura and Huron mills, Hardinge, Yang, DMG and Doosan lathes, two Agie wire eroders, and two additional Moore jig grinders.

Edgecam’s ability to drive machines from a variety of manufacturers, across the range of cutting technologies that Thomas Keating uses, with a range of controllers including Fanuc, Heidenhain, Fagor and Agie, makes it what Dr. Wylde calls “one of our core enabling technologies,” playing a vital role in producing the components which contributed to their Queen’s Award.

Those components form systems or sub-systems with applications in fields such as cosmology and structural biology. They include antennae in the focal plane of the Planck telescope that recorded radiation dating back to when the universe began; and the HiPER spectrometer looking at unpaired electrons in proteins to determine how proteins fold. The HiPER instrument is primarily aluminium with electroformed copper, and some of the internal structure is nickel silver. Other instruments include quasi-optic benches and flip mirrors for satellites.

All those components were manufactured by machine tools programmed with Edgecam, as was a sub-system researching bromine oxide in the stratosphere, built for JAXA, the Japanese equivalent of NASA.

The scientific instrument side of the business uses a lot of non-ferrous metals, primarily aluminium, brass and copper, and occasionally exotics such as inconel; while tools are generally made from mould steel, with the electrodes manufactured from tungsten, copper and graphite.

The company’s skillset ranges from experienced tool-makers like Tony White, to physicist Dr. Kevin Pike, and CAD/CAM engineers. When a customer orders an instrument, it is first designed electro-magnetically, then passed to a mechanical designer who translates how those electro-magnetic requirements can be served in a metal instrument. This is done in Pro-Engineer before being imported into Edgecam.

“It’s most important to us that Edgecam has the Granite option of importing native Pro/E files without having to go through a translation. This has significant benefits in dealing with questions of accuracy, or faults that can arise when importing from one system to another,” says Dr. Wylde.

Based in 12,000 square foot premises in West Sussex, with 35 employees, the company consistently invests between £100,000 and £150,000 a year in machinery and software. And as if they had not done enough to prove their credentials as being out of the ordinary, the company actually started life in the 18th Century as a chemist manufacturing flea powder.