How a Labeling Solution Saved a U.S. Manufacturer Millions

With operations and partners worldwide, Hypertherm was experiencing significant growth, however their existing consumables product label printing system was not sufficiently accommodating this growth, and was presenting considerable risks to their operations in this lean manufacturing environment. 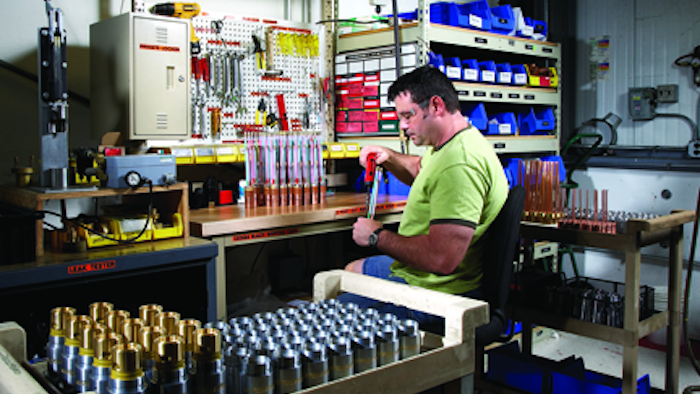 As a leading global manufacturer of advanced plasma, laser and water jet cutting systems, Hypertherm owns a large market share in their space, with 80 percent penetration in the plasma market. The company is a recognized leader, with Hypertherm’s products being used for cutting any type of metal, for applications in a variety of industries including shipbuilding, manufacturing, and automotive repair. With nearly 50 years of experience in cutting, and maintaining 1,300 associates, the company’s client list boasts of brands including Ford, Volvo, Harley Davidson and Caterpillar.

With operations and partners worldwide, Hypertherm was experiencing significant growth, however their existing consumables product label printing system was not sufficiently accommodating this growth, and was presenting considerable risks to their operations in this lean manufacturing environment. The company’s existing “home-grown” system was complex and customized with layers of third party applications, which posed connectivity issues for suppliers, and represented a single point of production failure. Additional software licenses were no longer available to enable them to grow or upgrade their existing deployment, and there were inherent issues with mislabeling. Further, the system was prone to breaking, ultimately causing significant downtime issues representing a loss of productivity, with five to ten hours of troubleshooting and fixing the label system each week. All of this resulted in customer dissatisfaction, brand integrity issues, and lost revenues, equaling $25,000 – $100,000 worth of productivity each week due to labeling issues.

With their customized, “home grown,” labeling system, Hypertherm found itself in the midst of production down situations all too often. Additionally, there were a variety of connectivity issues, which caused synching errors when trying to replicate data to local stations, which also resulted in more downtime.

Inability to print represented a critical issue, because when Hypertherm’s labeling process stopped, production stopped, and they were unable to get product out the door. Unfortunately, due to complexity of the legacy labeling system, it would take excessive amounts of time to figure out where the problem resided and get the system back up and running. This resulted in orders being delayed and credibility being lost.

The existing system required a reliable network connection because it was synching information from an FTP server to a local database that resided on each workstation.  If a failure occurred, there was no notification to the user and the labeling process continued, producing labels with incorrect data. Mislabeling or printing with the wrong data resulted in missed delivery deadlines, customers receiving incorrect parts, and costly returns. Incorrect labels had a downstream impact on customers, which could ultimately cause brand credibility issues and dissatisfaction.

Additionally, when a user selected a wrong printer and the job went to print, they would need to start the print process over which resulted in lost time and productivity. Hypertherm realized that they needed to establish a good technology foundation to eliminate, or at least reduce the role of human error in the occurrence of mislabeling. The company wanted to simplify their labeling approach so that they could configure a single enterprise application, rather than having layers of third party solutions and custom code. Hypertherm wanted a solution, which was automated and allowed them to simply scan a part number so that it would automatically pick the appropriate label template, the printer and the media, rather than requiring manual entry which added more failure points. They also wanted a system, which was “poke-yoke” compliant, meaning workers could simply scan a tray to establish the appropriate part number rather than manually typing in part numbers to avoid mislabeling.

As a growing company, Hypertherm was expanding their production capacity by enabling relationships with third-party manufacturers to supplement production when demand was high. That meant they needed a labeling system that could grow with the company, so that external suppliers could access their system and seamlessly print labels for successful “dock-to-stock” shipping. The existing system depended heavily on network connectivity. However, the lack of a reliable connection, especially for suppliers in Europe and Asia, resulted in unreliable access to the system, dramatically affecting the supplier’s ability to produce labels.

Many suppliers were experiencing syncing errors when attempting to pull data from Hypertherm’s labeling database which resulted in production down-time. In some cases suppliers needed to ship computers back to Hypertherm to be reconfigured which required a full-day get them back up and running. As they continued to grow and add to their network of suppliers, Hypertherm needed to have these external suppliers access the same labeling solution that they utilized to ensure consistency and enable continuous operations.

Hypertherm’s custom labeling application was primarily developed and managed by one manufacturing person, which represented a single point of knowledge and failure for this complex, multi layered printing system. Hypertherm recognized the risk and inefficiency of having a single resource responsible for their mission critical labeling. Considering the amount of system downtime and the system intricacies, they needed a more streamlined, automated system to address this significant risk point.

Maintaining their complex labeling system, which included 42 printer stations, was a daunting task. Setting up each label station entailed a complex process. Each station required nearly one full day to prep in order to put in the base applications and all the customizations on top. It involved installing the license, adding layers of off the shelf software, the custom interface was installed, and they needed to ensure the correct templates were at the right stations or they wouldn’t be able to print. Often when there was an issue, there was no clear way to determine where the problem originated due to the complexity of the system. This represented a very clear challenge to the IS Operations Team who spent significant time troubleshooting and routinely rebuilding labeling stations.

The person who programmed Hypertherm’s previous system did almost all of the label design because it was so cryptic because it required custom coding. When a label needed to be created, what was on screen didn’t have much correlation with what actually came out of the printer, so it required a tremendous amount of knowledge simply to design labels. Due to the complexity of their existing system it was necessary for IT to manage and develop code for producing any labels.

To institute best practices, Hypertherm was looking to extend control of the label design process to their marketing department. To do so, it required a solution that offered the ability for users in marketing to design labels without needing to rely on technical resources to write code for label design. To achieve the goal of enabling marketing to be responsible for label design, they needed a system to be WYSIWYG (What You See Is What You Get), so that the label they design on the screen is what actually gets printed.

After finding out how Loftware could address all of their existing challenges, with their out-of-box, 100 percent browser based, all-in-one enterprise labeling solution, Hypertherm deployed Loftware Spectrum to meet their global, on-demand labeling print requirements. As the recognized global leader, with over 5,000 global customers spanning 100 countries, Loftware provides enterprise labeling solutions, deep experience in a wide range of industries, and an unparalleled customer support to provide Hypertherm with an all-in-one solution designed to meet its complex labeling requirements.

Centralized Application for Internal and External Use

Hypertherm wanted to print and use the same application internally as they used for external customers because they wanted to avoid having multiple replicated databases. Spectrum’s streamlined, centralized approach, which allowed Hypertherm to drive data from a single source of truth, offered greater control.By using a central database, Hypertherm was able to avoid the need to replicate data in remote locations, which reduced errors and removed risk of synching the system’s data, while providing access from any point. This single repository ultimately simplified troubleshooting and streamlined processes.

Offering a streamlined print user interface allows users to initiate labeling and offers the ability to set default quantities and adjust them down but not up to eliminate potential stock piling of labels. With Loftware Spectrum, Hypertherm is able to initiate print jobs in an easily supportable way and greatly reduce the occurrence of mislabeling. In addition, Hypertherm achieves significant printing performance gains. Rather than waiting approximately 20 seconds for a job, once a user submits a job the printing is nearly instantaneous, eliminating confusion and redundant printing.

With the new labeling solution, substantial knowledge wasn’t required to simply design labels. Loftware Spectrum’s browser-based WYSIWYG label design offered more flexibility and empowered the business users in marketing to manage new label design as well as label changes. This eliminates the need for IT to get involved to write code for label designs while enabling a best practice of allowing marketing to take ownership of the design process.

With unlimited capabilities and possibilities, Loftware Spectrum offers Hypertherm a flexible and scalable solution for future labeling requirements. As they look toward the future, Hypertherm will rely on Spectrum to integrate to its enterprise applications for transactional labeling, leverage the power of Business Rules to readily support any future business requirements and to scale to meet Hypertherm’s plans for continued growth. To hear firsthand from Hypertherm about this process, check the Hyperthem webinar.

For more insight on Enterprise Labeling Solutions, check out our webinar “The Future of Enterprise Labeling an Industry Analyst’s Perspective” to hear VDC Research, the foremost experts in barcode hardware and software industry analysis explain why labeling is a strategic imperative for large, global organizations.

Josh Roffman is Vice President of Marketing and Product Management at Loftware, a global market leader in Enterprise Labeling Solutions.