Social media can be used to improve intelligence gathering and situational awareness. If ignored, it can have a devastating impact on your reputation. 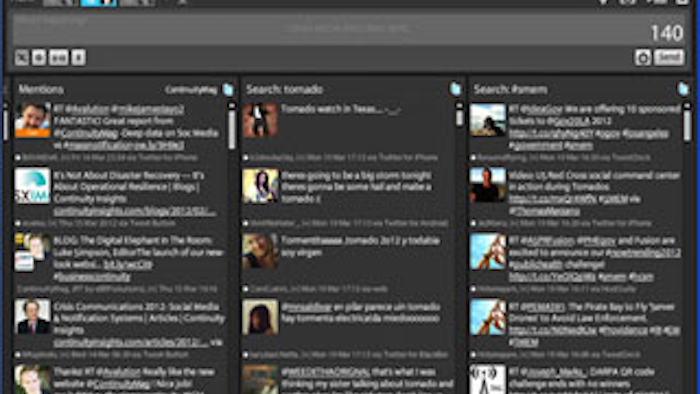 Social media can be used to improve intelligence gathering and situational awareness. If ignored, it can have a devastating impact on your reputation.

Social media is where the news is and where the people are. Often in a crisis, social media tools (and channels) are the most reliable communication mediums between family, friends and the wider community.

In Japan, for example, after the massive 9.0 earthquake and resulting tsunami, Tokyo’s transportation network and communication systems were paralyzed because of the constant network congestion. With the phone lines down for almost 24 hours, people utilized the internet to communicate with others and collect information. The internet and social networks became the platforms to retrieve information about disaster struck areas, nuclear power stations, as well as information to support those suffering and to direct donations.

Not only are the people using the web and social media for information in a crisis, but they have high expectations of emergency responders to do the same. According to a Red Cross survey, Americans expect first responders to be listening. One in five said they would try to contact responders through digital means and 69 per cent said that emergency responders should be monitoring social media sites in order to quickly send help. How quickly? Seventy-four percent said that they expected help to come less than an hour after their first Tweet or Facebook post!

The fact is that people rely on technology to survive in a crisis; the communications technologies we have today are people’s life lines.

The question is then, with the bewildering array of monitoring tools and technology that are available, what works best for emergency managers and business continuity planners when disaster strikes? Better still, what tools and support can you put in place before the crisis hits and everything is stretched to capacity?

The good and bad news is that there are no easy answers. Each organization will have different challenges, different cultures and different budgets. And technology is constantly evolving.

For many organizations, monitoring and analyzing social media is the domain of the marketing department and not business continuity or risk management. For others, the more conservative, “suited” kind of organizations, social media is still somewhat of a mystery, bewildering, dangerous and perhaps the responsibility of a lowly-paid employee. Or worse still: an intern.

Culture, silos and turf wars can get in the way of effective use of social media monitoring. The fact is that effective utilization of social media in a crisis requires a multi-disciplinary approach.  The marketers, the communicators, the planners, the lawyers, the programmers — they all need to come together to create a culture of trust, collaboration, cooperation and sharing to create a communication monitoring model that works.

Dell Computers, once a social media punching bag, has created a culture where social media is the responsibility of the majority of employees. Thousands have been trained in order to create a culture of situational awareness. Dell, like the sporting drink giant Gatorade, has a social media “war room” to monitor and analyze information about its brand — in real-time, 24/7.

Launched in December 2010, the Dell Command Center is the operational hub for listening and interacting across all social media. Dell is embedding social media across the fabric of the company, connecting with customers to listen, engage and act on every facet of business. They use the Web as a point of convergence to build stronger customer and supply chain connections, and improve products, service and business overall. This could, in turn, could lessen the risks associated with doing business in an ever increasingly wired and connected world.

According to Dell, the Social Media Listening Command Center tracks on average more than 22,000 daily topic posts related to Dell, as well as the mentions of Dell on Twitter that have a reach greater than the circulation of the top 12 daily newspapers in the United States.

Now, Dell has taken its command-center experience and partnered with the Red Cross to develop a social media crisis monitoring center at the relief agency’s Washington, D.C. headquarters. The command center tracks Twitter, YouTube and Facebook to find emergency victims and pass that info on to first responders to help get aid to disaster victims.

The Digital Operations Center, which will only be operational during major events, runs on a Dell network running Radian6 social media engagement software. However, data visualizations from the social media center, located in within the larger Red Cross Disaster Operation Center, will be updated around the clock.

For those of use without a major technology partner or millions to spend on social media monitoring, there is an array of free tools. While many do not provide analytics, they do provide the user with the opportunity to see numerous newsfeeds, twitter searches and blog posts all on one screen called a “dashboard.”

Below is a list of free and fee-based tools to consider.

Figure 2. The Sysomos MAP showing the hashtag penetration for the Queensland floods around the globe in January 2011. It also shows the hyperlocal and hyperlocal nature of the world today.

Hashtags are essential for tracking, monitoring and analyzing a crisis. As a reminder, a hashtag is a way to manage and categorize the content in your tweets to better find information or counter misinformation and rumors. Examples of hashtags used in crisis situations are #Joplin and #PrayForJapan.

During the 2011 floods in Queensland, Australia, police used the #mythbusters hashtag to effectively squelch any rumors or misinformation.

Hashtags evolve quickly and organically, and require some thinking about what might work best before the crisis or disaster hits. Work being done by the Epic Project at the University of Colorado shows that it is important for hashtags to refer to #location, #status, #needs and #damage. In a project known as Tweak the Tweet, researchers are looking at the best modification of Tweet messages to make them more readable.

Gone are the days of operating in a vacuum. Emergency communications now involve the highly interactive, high-speed world of social media. Reasons to monitor social media include:

Once a social media monitoring strategy is developed, it should be incorporate into semi-regular tests or exercises to ensure employees know what to expect and what to do. Additionally, mobile devices are often the easiest way to access social media during a crisis — plan how to best utilize them.

Principal of Jane Jordan & Associates, a boutique training, coaching and advisory firm, Jane is a high-stakes communication and media coach with more than two decades of experience in working with executive management in both the government and the private sectors. Most of Jane’s work today is in crisis management training with senior and executive management. Jane has taught at Masters and undergraduate levels at prestigious communication schools in Australia and is a frequent guest lecturer and speaker at conferences, workshops and seminars in North America. Her book on crisis media management, The Four Highly Effective Stages of Crisis Management: How to Manage the Media in the Digital Age was released in May, 2011. Jane can be networked with through her LinkedIn profile and on Twitter @janejordanmeier.