The brewery was ready for its most exciting upgrade: a solar heating system to fulfill its hot water manufacturing needs. 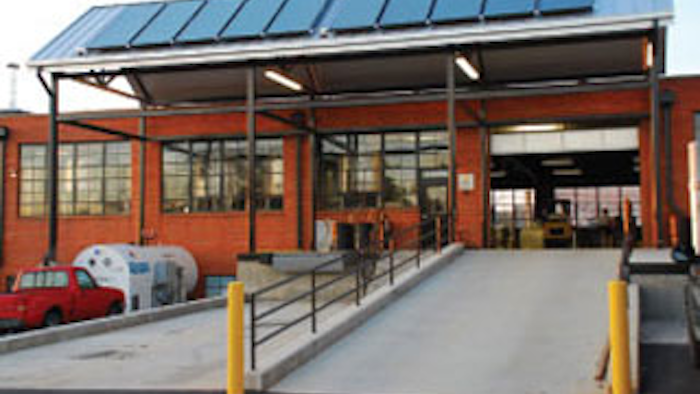 This article originally ran in the July/August 2012 issue of Food Manufacturing.

RJ Rockers, a brewery in Spartanburg, S.C., known for producing hand-crafted, high-quality brews since 1997 is moving up in the microbrewery world.

With business booming from brews like Son of a Peach and Bell Ringer, as well as the brewery’s popular restaurant, RJ Rockers needed more space and more hot water to make more beer.

The brewery found plenty of room to grow in a 46,000 square-foot building in Spartanburg’s west end. But the building, which started out as a car dealership in the 1940s and then became a Salvation Army, wasn’t ready to be moved into yet. The building wasn’t in great shape, and the heavy point load of brewery equipment required columns to be installed between the basement and the first floor. And because the southern facade of the building faces the historical Main St. district, a lot of time was spent coordinating with city inspectors to satisfy codes.

This done, the brewery was ready for its most exciting upgrade: a solar heating system to fulfill its hot water manufacturing needs. Partly, RJ Rocker was looking to save energy, and partly, the brewer simply wanted to be a greener company. But the company will also receive a third benefit. RJ Rocker is assured of a fair amount positive public attention and increased customer loyalty after installing solar heating systems, according to a recent report by Eneref Institute.

Beer brewing requires a recipe, and every brewer’s recipe is a little different, from the ingredients to the number of steps involved. In every case, though, more than one stage of the brewing process requires very hot water. In one of the first phases, for example, barley and hot water are mixed in a large steel tank called a mash tun. The heat allows enzymes to convert starches in the malt into sugar. Later, the brewing liquid, or wort, is boiled with hops and other additions to create the beer’s flavor and finish the initial brewing process.

Often providing up to 80 percent of a building’s hot water needs, solar water heating systems are a perfect fit for such a hot-water-intensive industry. Solar hot water for food production applications such as beer brewing are designated by the solar industry as solar heat for industrial processes (SHIP), or simply process heating. Recently, solar process heating has started being used for restaurants’ various hot water needs and to heat water for hotels’ laundry. But one of the most effective uses of process heating is in the food and beverage industry.

Solar heating systems supply a building’s water heating needs. They can also be used as space heat and even cooling for buildings. While it’s not unusual for these systems to continue to operate for 30 years, the savings come much sooner — in RJ Rockers’ case, a system would pay for itself in under five years.

But financial and energy savings weren’t the only factors in the decision. While, Nick Wildrick, one of three owners of RJ Rockers, says, “it was a monetary decision,” it also “made me feel good … [from] the marketing side of it.”

Choosing a solar thermal company was surprisingly easy. After “some research,” RJ Rockers selected the AET solar panel company. Randy Peats of MII Energy, the project’s sales agent, supported RJ Rockers’ inclination, choosing AET for the system. In fact, to help the entire solar system run as efficiently as possible, AET was involved from the inception of the project, helping with not just the design plans but even the site survey. As with other building’s renovations, solar heating projects follow various codes for equipment and installation. For example, IAPMO writes the national plumbing code for solar heating systems, and works in close contact with the plumbing contractors and technicians that are key to the industry.

One of these is Bill Poteat of Bresco Ltd., the chosen installer. Having worked with AET products for about ten years, Poteat was a perfect fit for the project. Poteat’s experience goes even deeper and broader than that, though. After starting out as a nuclear electrician in the U.S. Navy, Poteat founded Brescoe Ltd in the mid 1970s and soon began working with solar energy, both photovoltaic (PV) and solar heating. While solar heating is the collection, storage and use of heat from sunshine to make hot water, photovoltaic solar systems use sunlight to generate electricity.

Poteat installed ten AET flat plate drain-back collectors. To avoid altering the look of the building and allow a design with maximum efficiency, the group chose to build a free-standing structure next to the building to support the panels.

It took about 250 hours of work to plan the system, and Poteat and Brescoe Ltd. completed the installation in just a few days.

To maximize the collector’s efficiency and utility, the system’s daily 600-gallon output is used to preheat the water to a preliminary temperature for the brewing process, taking it from about 56 degrees to 120 or 140 degrees. The solar industry categorizes temperature into three groups: low, medium and high, depending on the application. For example, low-temperature systems are used to heat swimming pools. RJ Rockers was a medium-temperature solar application, whereas, for example, solar heating for the cooking process would be a high-temperature process. To heat the water the rest of the way, to 172 degrees, the brewery uses natural gas and a highly efficient boiler.

With the system supplying the equivalent of 400,000 BTUs per day, the system “more than pays for itself,” says Wildrick.

Looked at another way, RJ Rockers will save the rest of us almost 300 tons of greenhouse gas emissions over the 30-year life of the system. Wildrick believes customers appreciate RJ Rockers taking action, saying, “The value of the panels being on the roof is far more valuable than the money actually from … the energy savings.” According to Wildrick, the brewery hasn’t had to work hard to get word out to customers, either. “This is not the first magazine article that has been done on us because of the solar panels.”

With Americans growing more concerned about global warming, more and more food companies are looking for ways to have their products to appear green. But when RJ Rockers made a commitment to solar energy, eco-conscious customers got to feel good about their beer and RJ Rockers got great savings and free publicity. In other words, going green with solar heating is a win for everyone.