Alan Uke, the San Diego entrepreneur who created the federal smog index for automobiles, is declaring the week around the Fourth of July as ‘Buy American Week’ and urges all Americans to do their patriotic part to bolster the American economy by buying goods made in the United States. 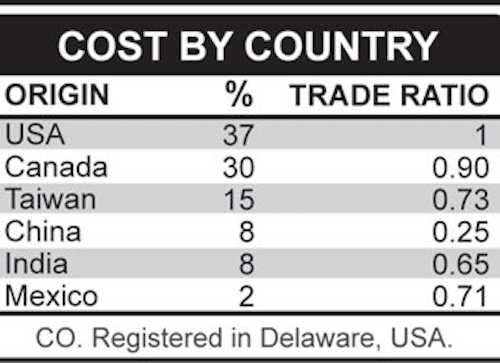 Alan Uke, the San Diego entrepreneur who created the federal smog index for automobiles, is declaring the week around the Fourth of July as ‘Buy American Week’ and urges all Americans to do their patriotic part to bolster the American economy by buying goods made in the United States. Alan is asking Congress to pass a resolution for Buy American Week, part of his growing campaign to bring attention to our country’s trade deficit.

In his new book, BUYING AMERICA BACK, Alan explains that if we put detailed Country of Origin Labels on products—similar to nutritional labels—consumers will know exactly where products are made. The labels will also tell us if those producing countries have wildly imbalanced trade ratios with the United States. This label will allow consumers to make educated, conscientious decisions about what we buy and how it affects the American economy and the U.S. job market. Alan recently spoke with IMPO to discuss the role of the American consumer and of Countries of Origin labels. For more information, visit www.buyingamericaback.org.

Q: What are some simple, breakthrough ways to empower the American people to impact America’s trade deficit?

Our consumer economy is two thirds of the total economy, $15 trillion—that adds up to a large portion of our deficit. And so, 1 percent of our consumer spending is $100 billion dollars, which is 1.3 million jobs. So if you just get people to start making a better purchase for the country buying from a fair trade country or buying American, it would greatly help the U.S. export market. And the numbers add up substantially. So what happens then is you have a consumer-led market, instead of being forced to buy this or buy that, you have a whole base for potential operation to buy your stuff, if you’re selling a good quality product that’s reasonably priced. And then you’ll get competition, but the point is, given the even situation—it may be $1 more if you take it to the American market. And our justification also is, probably the American one might be better made, longer lasting. American companies have more experience in some things, so they have a reputation to uphold, a better livelihood, so they’re worried about longevity, and basically their people are more experienced.

Q: How can Countries of Origin labels boost the American economy?

Basically it’ll be like food, where you have the fields on a square on the back of a package that tells you where the stuff came from that you just bought, and it helps you maybe pick a quality. Or maybe it’s a country you don’t want to buy anything from because of child labor. So a consumer can then buy according to their personal values, products that you support or don’t support with your money. Because when you buy something, you basically are encouraging it, because if you buy more of it, there’s more of that going on.

It allows you to direct your money, because now you have a list of percentage content by country. It’s just like food—you know how many calories it’s got, how many carbohydrates, protein. It’s your decision, and you can make that decision because you now know. I’m trying to expand that.

The other reason why the labels need to be changed is that we have the worst labeling laws of all the industrial countries. Right now, you can have a situation where you could have a majority of foreign content that can be labeled made in the U.S.A. The rules are that it’s either 75 percent U.S. content, or the last point of significant transformation. You can basically buy all these parts overseas, put it together here and do something to it, and then you can re-label it as now ‘made in the U.S.A.’ But if you added up the dollars, total cost, over 80 percent of it is from out of the country. We’re the only country in the world that permits that. In some other countries, it’s actually fraud and you can be criminally prosecuted. We’re asking for a change, where if it’s made in the U.S.A., it’s almost all made in the U.S.A., not just had something done to it here.

Now things are made in many countries, if you just assembled a large country content, a variety—you need to list it out, what it is. And then we’re going to let the consumers decide what they want to buy. So they can ignore it, study it, or whatever they want to do—spend as much energy on it as they want. I’m trying to make this a consumer-led effort, and if nothing else, it will allow the customers to know what’s going into the product they’re going to buy, to make a logical choice.

I’m trying to help consumers think about things being made here, but the other thing is the United States Revolution was not just about political freedoms, it was about economic freedom. We had elections and things like that in the Unites States. The problem that we were having with the Boston Tea Party was about the economic control that we were under from England, and we were actually originally forbidden from making certain things here. The reason for ‘Buy American Week’ is part of the revolution was to be able to make it in America. So it’s historically appropriate to add that to it, in addition to the current economic problems.