This application has helped the food processing company increase the safety of its products while reducing labor expenses by reducing the need for manual inspection. 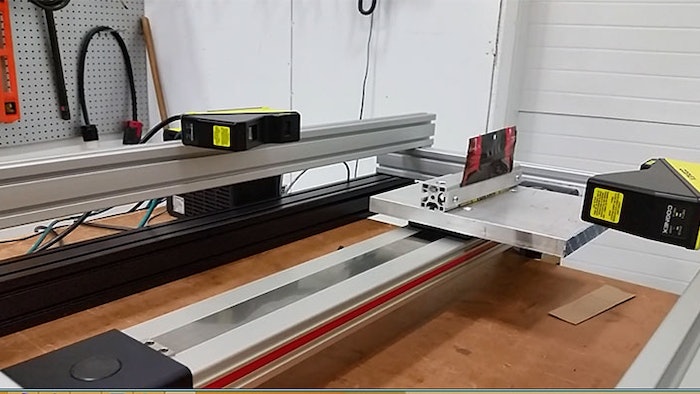 A major food processing company packages a number of different products in heat-sealed bags. The potential exists for food particles to be trapped in the seal and, in some cases, these particles can form micro channels large enough for bacteria to enter the package. Contaminants are tiny and are often hidden by the seal, which has made it difficult for successful inspections by 2D vision systems.

PFM Integrators addressed this challenge by developing a vision application in which a robot passes one bag every second — to keep pace with the bag sealing line — in front of two Cognex DS1100 3D vision systems, placed opposite to one another. The vision systems accurately measure the surface profile of each bag. These measurements are used to determine the thickness of the seal and identify any thickness variations that may indicate a failure in the integrity of the seal, such as contaminants stuck in the seal. This application has helped the food processing company increase the safety of its products while reducing labor expenses by reducing the need for manual inspection.

Flexible heat-sealed bags offer the advantages of improved food quality, reduced energy consumption, ease of access to product and faster heating using either boiling or microwaving. These packages are used for a wide range of food products including soups, meat and fish. The integrity of each package is critical to human safety and product quality.

The presence of food particles between the seal can reduce seal strength and open micro channels through which air and microorganisms can enter and spoil the product. It’s important the defective packages be detected and removed from the production chain as early as possible in the manufacturing process. Federal regulations require that producers inspect each container after sealing to check for compromised seals. Most food processors assign operators to manually inspect seals but this approach has its limitations. The need to inspect each package manually drives up labor costs. Another concern is that defects may be caused by particles that are too small to be detected with the naked eye. Combine this with the fact that human inspectors are prone to fatigue and inattentiveness, and it creates a challenging inspection process to complete manually.

Some food processors have experimented with conventional 2D machine vision to inspect the seals. “When this food processor tried inspecting the seals with 2D machine vision, the vision system either rejected every bag or let every bag pass depending on how the vision system was calibrated,” said Ken Baych, President of PFM Integrators. “The problem was that the contaminants trapped in the seal did not provide a sufficient visual signature to be detected by 2D vision systems. A couple of years ago we evaluated the use of 3D vision systems to inspect the seals but at that time the cost of 3D vision systems was so high that we felt they would not be able to provide a sufficient return on investment.”

Over the last few years, a new generation of 3D vision systems has appeared on the scene that use laser triangulation to extract 3D information from parts at a considerably lower cost than the 3D vision systems available in the past. “The vision systems used in this application cost only about one-half of the amount of those that we evaluated in the past,” Baych said.

The new 3D vision systems use a laser range-finder to project a beam onto the object to be measured. The image sensor captures a three dimensional point cloud of data to calculate the points of the object. This point cloud of data can be used to measure 3D and 2D features such as length, width, height, tilt or volume. It can be used to detect defects or presence or absence features, or read raised or embossed characters against a low-contrast background.

A critical step in setting up the application was distinguishing between good and bad seals. The seal is about 0.25 mm thick as measured by mechanical calipers in the areas where it has a uniform appearance with crosshatch texture on one side. All seals have small voids and lumps that don’t compromise the seal integrity. The voids are typically less than 0.1 mm deep and the lumps are less than 0.2 mm high. Some seals have areas with a melted looking appearance where the crosshatch texture is degraded or missing but these also do not compromise the seal. Some of these areas are islands within the seal area and the seal also tends to look like this near the edges, especially near the edge where the seal meets the bag interior. Bubbles, wrinkles or foreign objects trapped in the seal that do not affect airtightness are a cosmetic issue. Some of these are considered defects and some are not, depending on their size and other characteristics.

The 3D vision inspection system provides near 100 percent accuracy in distinguishing good from bad seals and can be programmed to classify any particular category of seal, such as the ones shown above, as either good or bad. PFM is using this patent-pending technology to develop an inspection system product which can be integrated into most packaging lines. A key advantage of this approach is that it does not require accurate positioning of the bag, which is difficult to accomplish in any event. With the vision systems measuring the profile of each side of the bag in space, accurate thickness measurements are provided even if the bag is in motion at the time the image is acquired. The vision systems also upload each acquired image to a central storage system that can be accessed by manufacturing engineers to rapidly improve the process.