One of the most important missions of nearly every food processor is ensuring that every container shipped has accurate allergen labeling. 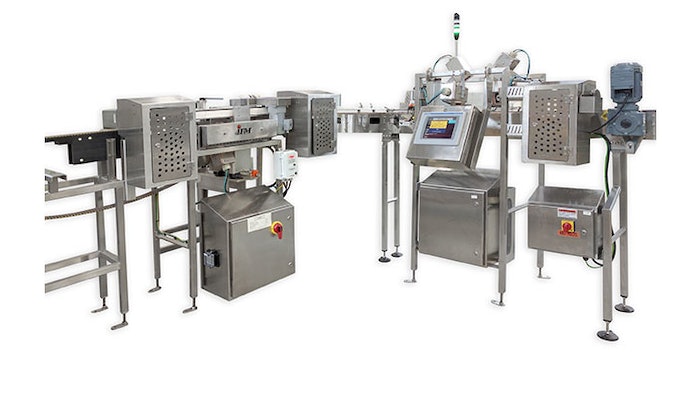 One of the most important missions of nearly every food processor is ensuring that every container shipped has accurate allergen labeling in order to avoid the possibility of injuring a customer, cost of a recall, damage to reputation, etc. For example, specific flavors of one food processor’s ice cream and whipped topping contains dairy, peanuts, walnut and coconut, among other allergens. Since a single mislabeled product is unacceptable, the company made the decision to invest in an automated system capable of inspecting each individual package to make sure it has the correct label. The challenges that needed to be addressed included inspecting the labels on the lids of ice cream tubs being transported upside down and the fact that the inspection stations had to be accommodated without increasing floor space.

The frozen desert manufacturer worked with Integrated Packaging Machinery (IPM) to develop two inspection stations to perform 100 percent inspection as the product passes by at a rate of 120 per minute. The ice cream tubs are transported upside down in order to improve stability. To read the labels on the lids, IPM designed a new conveyor with a gap and added a belt that grips each package and passes it across the gap to the downstream section of the conveyor. A vision system located under the gap reads the label while it is transferred. Then additional vision systems at a second inspection station are arrayed to read the labels on the tubs regardless of the tub’s orientation and the lids of the whipped topping packages, which are transported right side up.

“The frozen desert producer is now able to ensure that each individual item is labeled correctly without having to rely on human inspectors,” said Dustin Pilbeam, Controls Engineering for IPM which is located in Rockford, Michigan.

The frozen dessert line produces pint- and quart-sized packages of ice cream in a wide variety of flavors, and 9-ounce containers of whipped topping. These products were previously transported from the filling line to the freezer on a 10-inch-wide, 25-foot-long conveyor with a 90 degree turn. The frozen desert manufacturer wanted to prevent the possibility of a mislabeled product that, according to Swiss Re’s report entitled Food Safety in a Globalized World “can cause sicknesss, death, multi-million dollar losses and massive reputational damage for the affected companies.” The line handles many different flavors and varieties of frozen desserts with each having its own unique universal product code (UPC) and labeling. Each package has two labels, one on the cup and one on the lid. Each label has its own unique artwork and a 2D barcode on the cup label and a 1D barcode on the lid label.

“The frozen desert manufacturer asked us to design and build a system that inspected both labels and for the presence of a lid with 100 percent accuracy,” Pilbeam said. “A particular challenge was that the ice cream packages were conveyed upside down from the filling line to the freezer because this is their most stable position. We needed to find a way to inspect them in that face-down orientation. Furthermore, the plant does not have any available floor space so the inspection operations needed to be added without increasing the footprint of the line. We also needed to interface with the Allen Bradley programmable logic controller (PLC) that manages the line so that product with an incorrect label can immediately be removed from the line. Finally, the food processor is also continually introducing new items and changing the labeling for existing items so we needed to provide a simple way to accommodate these changes.”

Selecting the vision technology was one of the first steps in designing the inspection system. Laser scanners were out of the question because they cannot read 2D barcodes. The traditional approach to machine vision involves the use of cameras controlled by personal computers. But PC-based vision systems take considerable time and effort to integrate because they require considerable vision expertise and in many cases knowledge of low-level programming languages.

IPM interfaced the vision systems to the Allen Bradley PLCs using the Ethernet/IP protocol over an Ethernet network and by connecting the discrete output of the vision systems directly to IO blocks in the PLCs in situations where speed is critical. The vision systems perform pattern matching operations using the Cognex PatMax algorithm to identify distinctive areas of the label including text and images. This technology learns an object’s geometry using a set of boundary curves that are not tied to a pixel grid and then looks for similar shapes in the image without relying on specific gray levels. This approach can find objects despite changes in angle, size and shading.

“The interface takes only six button pushes to train a new set of two labels,” Pilbeam said. “The user pushes a button on the main screen to signal that a new product is coming down the line. The operator then runs a few containers with the new labels through the line. The vision systems capture and save an image of the new labels. The operator is then prompted to enter an easy-to-remember name for the label such as 'Chocolate ice cream pint.' The vision systems are then configured to run the new label until another label is entered in the HMI. The new label can also be called up in the future based on its name.”

A photoeye and an encoder are used at the infeed of each inspection area to measure the length of each container so that the vision system can be triggered on the center of the product and also to track the distance the product will travel from the entrance of the inspection system to the reject area so that if a product needs to be rejected the ejection arm can be actuated at exactly the right moment. Tracking the product with an encoder also makes it possible to change speeds on the conveyor while ensuring that every product moving through the line is properly inspected. IPM engineers solved the floorspace problem by making the new conveyor only four inches wide, leaving room for the vision systems on the sides of the conveyor while occupying the same footprint as the previous conveyor.

“The new inspection systems have met all of our customer’s requirements by instantly rejecting mislabeled or faulty containers before they enter the freezer,” Pilbeam concluded. “The inspection systems have generated zero false negatives in testing and in production, meaning that they have never passed a product that with an incorrect label. The vision systems have also shown very high read rates, 100 percent in a controlled environment with the labels being checked in advance to be sure they are correctly applied. In the production environment the read rate is reduced to 99.95 percent with non-reads being caused by defective labels.”