If The Climbing Shoe Doesn’t Fit, Design A New Foot

Exposed on a vertical face, rock climbers rely on their instincts, experience and, as importantly, their equipment. For C.J. Howard, a northern California-based climbing enthusiast, as with all climbers, the shoes are important. But as a lower-leg amputee, even more important is the customized prosthetic foot that he designed with climbing partner and environmental/aerospace engineer Mandy Ott. 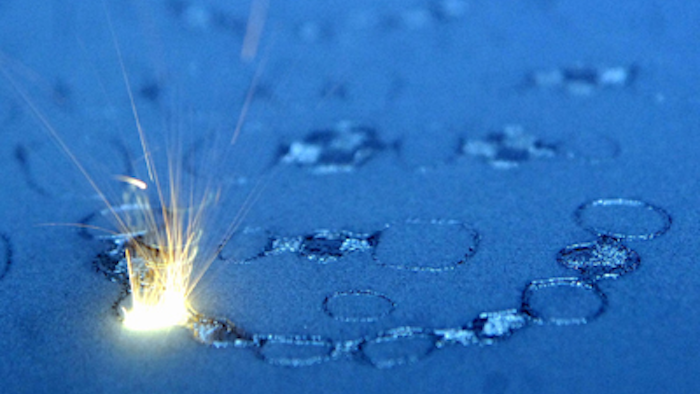 Ott contacted Morris Technologies, an Ohio firm that specializes in additive manufacturing and is the largest deployer of DMLS in the world.

Exposed on a vertical face, rock climbers rely on their instincts, experience and, as importantly, their equipment. Depending on the rock and route, they use an assortment of gear from carabiners, cams, and chocks to harnesses, helmets, and specialized climbing shoes. Some footwear is stiff while other shoes are extremely flexible. Different styles can be used for finessing cracks, balancing on small toeholds, or smearing sloping slabs. But the choice depends on individual preference.

For C.J. Howard, a northern California-based climbing enthusiast, as with all climbers, the shoes are important. But as a lower-leg amputee, even more important is the customized prosthetic foot that he designed with climbing partner and environmental/aerospace engineer Mandy Ott.

Howard had been an athlete all his life and was a distance runner for the University of California, Irvine cross-country team before a diagnosis of osteosarcoma. Amputation of his left leg just below the knee followed. After the surgery, he continued to run competitively, setting amputee world records in several events. Then he met Ott, who introduced him to climbing in 2008. Always eager for a challenge, he quickly took to the sport, which was also easier on his stump than running.

Howard started out climbing with his standard artificial foot fitted to a climbing shoe. But the prosthesis’ generic shape didn’t work well with the specialized footwear, wearing them out quickly. He and Ott mulled over what would work better.

“C.J. and I were sitting on the couch and he said, ‘It would be nice if I could have a foot that’s more suited to climbing,’” says Ott. “So I got out my laptop, opened an engineering CAD program, and on-the-spot created what he described, which was the shape of an aggressive climbing shoe with a downturned toe — like a banana. I just drew what he wanted. It was simple.”

But how best to manufacture the new prosthesis? Ott immediately thought of an additive manufacturing process called direct metal laser sintering (DMLS) that she had encountered in her mechanical engineering work at a major aerospace company. The technology is often used to build one-of-a-kind prototypes and end-use parts with a turnaround time of just a few hours. “I never even thought about fabricating it using traditional machining techniques because that process would result in seams in the foot or there might be nuts and bolts sticking out,” says Ott, “and that wouldn’t work well for climbing.”

Ott contacted Morris Technologies, an Ohio firm that specializes in additive manufacturing and is the largest deployer of DMLS in the world. Morris had also served as a supplier for an earlier project she had worked on. “The rest just fell into place,” she says. “They completed the prosthesis just before Christmas, and when C.J. opened his surprise present and saw the new foot, he had a grin on his face that was priceless.”

The metal laser-sintering process builds (or “grows”) an object layer-by-layer, out of sintered metal powder, in an additive manner.

Building the Prosthesis, One Step at a Time

Unlike traditional metal-forming techniques — such as milling, drilling, sanding, and polishing — that remove, or subtract, material from a solid block, the metal laser-sintering process builds (or “grows”) an object layer-by-layer, out of sintered metal powder, in an additive manner. Ott’s digital CAD model of the prosthesis served as the three-dimensional blueprint to guide the process. The material that Morris engineers chose was a commercial-grade titanium (Ti64) with superior strength and light weight, important properties given the intended use.

Fabricating the approximately 6-by-3-by-2-inch, smooth-edged foot took about forty hours and started with uploading the CAD file to the DMLS machine, where it was converted to a 2D sliced file. Titanium in powder form was deposited on a platform in the build chamber of the system — a unit manufactured by German-based EOS GmbH, developer of the DMLS technology. A focused 200-watt laser traced the first cross-sectional slice of the foot, melting and hardening the metal powder at high heat into a solid replica of the digital data. Fresh powder was then reapplied and the next layer of the CAD model was outlined by the laser, fusing it to the first.

As the process repeated, the foot “grew” one 20-micron layer (about the thickness of five human hairs) at a time. Following the fully automated build cycle, excess powder was removed and the prosthesis was stress relieved in vacuum conditions at high heat to cure the metal and ensure material strength properties.

The finished five-pound foot was a single-piece construction, hollow (to minimize weight) and with no seams or fasteners. A separate vendor coated it with a rubber used for climbing shoe soles. The accompanying leg — a solid titanium rod — connects to a socket and Howard’s upper leg.

While this prosthesis was the first one Morris Technologies had produced, Tim Warden, vice president of sales and marketing at the company, sees laser sintering as ideal for this kind of application. “A prosthesis should be customized to an individual’s anatomy,” says Warden. “After trying it out, if it doesn’t fit or function quite correctly, we can just tweak the CAD file and ‘re-grow’ the product, adding a little more material in a critical area.”

As designs go, Howard’s climbing prosthesis was fairly simple. Specialized prostheses (replacements) and orthoses (braces) for competitive disabled athletes who run, ski, and cycle can be more complex (see sidebar). Warden points out that the DMLS process is also perfect for producing medical products with even more critical geometries. This could include orthopedic implants for hips, knees, shoulders, ankles, and even spines, as well as patient-specific surgical instruments. A growing list of materials — including biocompatible plastics and metals — is enabling Morris engineers to consider laser sintering for a number of cutting-edge medical applications.

Morris also uses the process for a wide variety of other applications from aerospace to automotive to industrial. “We select DMLS over traditional manufacturing methods in instances where it can reduce both product development lead time and cost,” Warden says.

Climbing as much as three times a week when he can get away, C.J. Howard has now had the opportunity to try out his new prosthesis in the field. His northern California test sites have included the granite of Tahoe’s Lover’s Leap, the single-pitch trad routes of Phantom Spires, sport climbing at Luther Spires, and the crevice and chimney systems of nearby Sugarloaf. He has also climbed with it on dome and crack routes in Yosemite.

C.J. Howard has now had the opportunity to try out his new prosthesis in the field. His northern California test sites have included the granite of Tahoe’s Lover’s Leap, the single-pitch trad routes of Phantom Spires, sport climbing at Luther Spires, and the crevice and chimney systems of nearby Sugarloaf. He has also climbed with it on dome and crack routes in Yosemite.

“Designing a prosthesis for climbing involves a little bit of trial and error,” says Howard. “Now that I’ve used this one, I know what types of climbing it works really well on and what types it doesn’t.” The first design happened pretty quickly Ott adds. “Both C.J. and I agree that there are changes that we would like to try out.”

Howard and Ott can imagine at least two more artificial foot designs that could be used by disabled climbers. “I want to design one shaped like a triangle for pure crack climbing and another with less downturn for more slabby conditions,” says Howard. “It’s like changing tires on a race car. You just switch your leg for different climbs.”

There are some issues still to be addressed with the rubber, which didn’t initially adhere well to the surface. Warden notes that specialized software can be used with DMLS to create surface features on the titanium that would make it easier for the rubber to adhere. The technology can also build lattice structures into prostheses to make them lighter. Ott adds, “There are no limitations to what you can make with DMLS. Every engineer should try it.”

There don’t seem to be any limitations for Howard either. “Rock climbing has been incredibly liberating for me,” he says. “The opportunities presented by life are endless.”