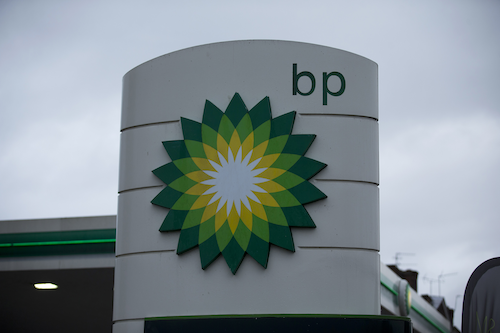 BP reported Tuesday that underlying replacement cost profit fell to $196 million from $2.2 billion in the same quarter a year earlier. The figures were reported using an oil industry accounting standard that takes into account fluctuations in the price of oil and excludes non-operating items.

The company also set aside an additional $443 million in the quarter to cover costs related to the Deepwater Horizon oil spill in the Gulf of Mexico in 2010. Total charges for the spill now total $55.5 billion.

Oil companies are slashing jobs and delaying investments as crude prices plummet. Brent crude, the benchmark for North Sea oil, fell 34 percent last year and hit a 12-year low of $27.10 a barrel in January. Brent traded at $34.13 on Monday and traded over $100 a barrel as recently as September 2014.

"We are continuing to move rapidly to adapt and rebalance BP for the changing environment," CEO Bob Dudley said in a statement. "We're making good progress in managing and lowering our costs and capital spending, while maintaining safe and reliable operations."

The company said it reduced controllable cash costs by $3.4 billion last year, and estimated future cuts at almost $3.6 billion. It also forecast asset sales as much as $5 billion this year.

BP also announced 3,000 job cuts globally by the end of 2017. That is in addition to 4,000 cuts planned in exploration and production — including some 600 in North Sea operations. European rival Royal Dutch Shell, which reports earnings later this week, told investors in January that streamlining and integration from a planned merger with British gas producer BG Group would claim some 10,000 staff and contractor jobs across both companies.

BP says its net loss narrowed to $3.3 billion from $4.4 billion a year earlier.

Oil prices have plunged because global supply is high at a time when consumption is growing more slowly than expected. Demand is weakening in China, and investors are jittery because economic turmoil there is expected to slow the growth in demand further.

OPEC members, meanwhile, are refusing to cut production for fear of losing market share to non-members such as the U.S. and Russia. Iran, which is trying to emerge from decades of sanctions, wants to start pumping more, adding to global supplies.

All this means prices are unlikely to bounce back soon. Some analysts have forecast they will drop to near $10 a barrel before rebounding.

"BP CEO Bob Dudley will be particularly keen to ensure that the dividend remains untouched having finally restored it in the wake of the Gulf of Mexico disaster, having made the company much leaner since taking over the reins," said Michael Hewson, an analyst at CMC Markets. "But with average oil prices still trading at multi-year lows so far this year the question now needs to be asked in how long can BP sustain the dividend at current levels, without an imminent pick up in oil prices."