US Productivity Increased at 4.6% Rate in Third Quarter

Productivity had surged at a 10.6% rate in the second quarter, but the data has been volatile. 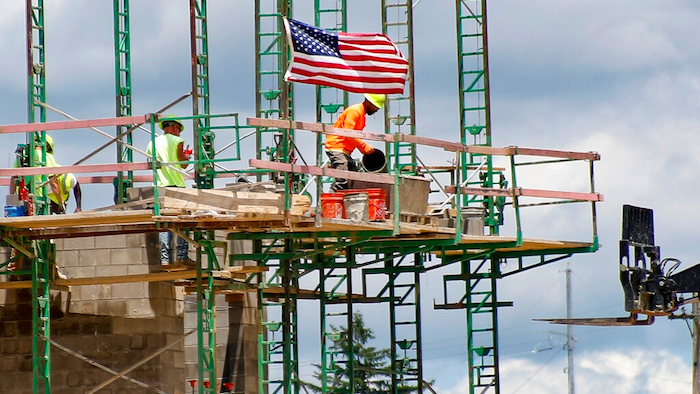 In this June 11, 2020 file photo, workers on scaffolding lay blocks on one of the larger buildings at a development site where various residential units and commercial sites are under construction in Cranberry Township, Butler County, Pa. U.S. productivity increased at a solid 4.6% pace in the July-September quarter, slightly below the initial estimate, while labor costs fell at a slower pace. The Labor Department reported that the third quarter increase in productivity was below the first estimate a month ago of a 4.9% increase.
AP Photo/Keith Srakocic, File

WASHINGTON (AP) — U.S. productivity increased at a solid 4.6% pace in the July-September quarter, slightly below the initial estimate, while labor costs fell at a slower pace.

The third quarter increase in productivity was below the first estimate a month ago of a 4.9% increase, the Labor Department reported Tuesday. Productivity had surged at a 10.6% rate in the second quarter.

Labor costs fell at a 6.6% rate in the third quarter , a smaller drop than the 8.9% decline estimated a month ago.

Productivity, the amount of output per hour of work, is the major factor determining living standards. As productivity rises, employers can pay their workers more without having to boost the price of their products.

“The data have been especially volatile quarter-to-quarter reflecting the impact of COVID-19 on output, hours and compensation,” said Rubeela Farooqi, chief U.S. economist at High Frequency Economics. “The underlying trend in productivity will likely moderate from the current pace over coming quarters.”

The big increase in productivity in the second quarter occurred because employers were laying off millions of workers and the decline people working was greater than the drop in production that occurred in the spring as a result of the widespread shutdowns to try to contain the coronavirus.

Productivity has lagged in recent years and economists have cited this slowdown as one of the major problems facing the country since sluggish productivity growth keeps living standards from rising at a faster pace.