He criticized decisions to reopen businesses this spring before getting the virus fully under control. 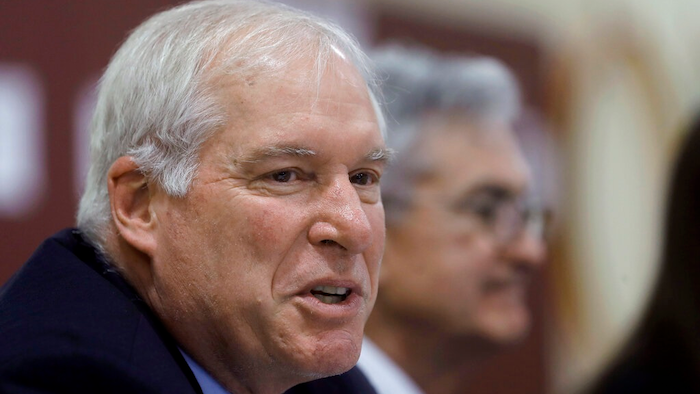 In this Nov. 25, 2019 file photo Federal Reserve Bank of Boston President Eric Rosengren, left, speaks during a round table discussion at Silver Lane Elementary School, in East Hartford, Conn. Rosengren said in remarks delivered online Wednesday, Aug. 12, 2020, that states in the South and West that allowed their businesses to reopen after short shutdowns saw an initial burst of economic activity. But spikes in infection rates soon followed and those states’ economies are now lagging those in the Northeast as consumers have become more cautious.
AP Photo/Steven Senne, file

WASHINGTON (AP) — A top official at the Federal Reserve criticized the decision by many states to reopen businesses this spring before getting the virus fully under control, and said those choices have hindered an economic recovery in the U.S.

Eric Rosengren, president of the Federal Reserve Bank of Boston, said states in the South and West that allowed businesses to reopen after shutting down for a brief period did register an initial burst of economic activity. But spikes in infection rates soon followed and economies in those states are now lagging those in the Northeast as consumers have become more cautious and bars and restaurants have been shut down again in some states.

Rosengren's comments, delivered online Wednesday, are some of the most specific yet by a Fed official tying the health of the economy to the nation's ability to control the virus. Fed Chair Jerome Powell has emphasized generally that recovery from the recession depends on conquering the pandemic, but Rosengren's remarks delved into the sharp difference in infection rates, both within regions of the United States, and the U.S. compared with Europe.

“Limited or inconsistent efforts by states to control the virus based on public health guidance are not only placing citizens at unnecessary risk of severe illness and possible death – but are also likely to prolong the economic downturn,” Rosengren said in prepared remarks.

“Despite the sizable interventions by monetary and fiscal policymakers ... the recovery may be losing steam, as activities in many states are once again restricted (officially or voluntarily) to slow the virus’s spread,” Rosengren said.

In Europe, nations “shut down more forcefully, maintained restrictions longer, and did not reopen until the virus had reached low levels,” Rosengren said. “In contrast, in the United States, infection rates remain elevated, as states lifted protective measures too soon,” Rosengren said.

As a result, real-time data shows that in Europe, visits to retail stores and recreation outlets, such as movie theaters and amusement parks, have recovered more robustly than in the United States and are closer to pre-pandemic levels, Rosengren said.

Rosengren also pointed to the high current savings rate in the United States as evidence that Americans have been reluctant to spend, despite stimulus checks of $1,200 that were mailed to most Americans in the spring, and supplemental federal unemployment aid of $600 a week.

Government shutdowns of many businesses have discouraged consumer spending, but so has the individual choice to avoid restaurants, movie theaters, gyms and other public places deemed to risky as the virus surges in parts of the country.

“As long as the virus poses significant threats to public health, a full economic recovery will be very difficult as individuals, often voluntarily, avoid activities that place their health at risk,” Rosengren said.

Other Fed officials have warned that the viral resurgence in July could slow the U.S. recovery. And Dallas Federal Reserve President Robert Kaplan said last month that more widespread use of masks would slow infections and help the U.S. economy.

“The path of the economy will depend significantly on the course of the virus,” Fed policymakers said in a statement issued after their most recent meeting last month.