See Friday's developments related to the global economy, the workplace and the spread of the virus. 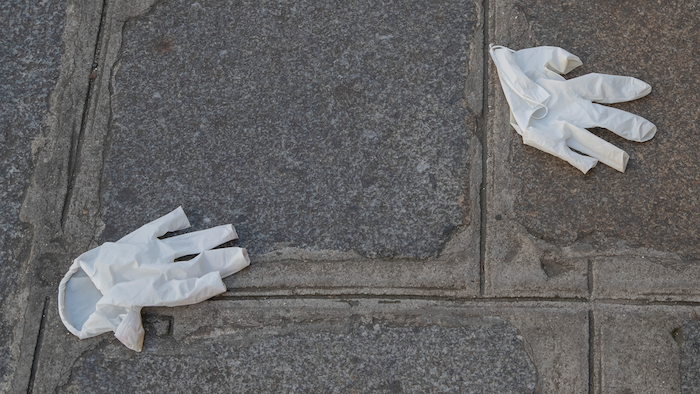 Plastic gloves lays on the ground in Paris on Friday, April 10,during a nationwide confinement to counter the new coronavirus.
AP Photo/Michel Euler

CONSUMER DURESS: The consumer drives about 70% of all economic activity in the U.S., and that engine is sputtering. with millions of people shut in their homes.

— The company that runs Coach, Kate Spade and Stuart Weitzman stores extended the closure of all locations in North America and Europe by two weeks, to April 24. Tapestry on Friday suspended share buybacks and CEO Christopher Rondeau voluntarily gave up his base salary.

— Citi expects that the chill in consumer spending will forestall the Fed's 2% target inflation rate “for some time.”

— Gas prices are falling because commuters, vacationers and road trippers are doing none of those things. Advanced Auto Parts pulled its financial forecast for the year, saying it is no longer reliable.

NOT HEALTHY: Hospitals are the front line in the fight against the pandemic, and the economic cost for the health sector is mounting.

Hospitals and medical practices are facing a cash crunch because of the mass cancellation of elective procedures to prepare for rising numbers of coronavirus patients, many of whom require specialized treatment.

LETTING OURSELVES GO: The phrase “the COVID-15” is gallows humor for potentially universal weight gain with so many people holed up in their homes. Gyms are closed, bicycle trails are cordoned off, and even walking outside can be risky. And makeup? Why bother.

— The credit ratings agency Moody's downgraded Coty and pH Beauty, both cosmetics companies, on Friday. People are not going to work, to bars, and when they travel outdoors, it is often with a covered face. None of that bodes well for makeup or skin products.

— Planet Fitness, which operates about 2,000 gyms, furloughed all employees at the locations it directly controls. Store managers will be kept on to oversee the properties. The company continues to pay benefits to employees who was enrolled in those programs.

TECH ASSIST: The largest U.S. tech companies, as well as startups, are assisting in the fight against the coronavirus.

— New York has partnered with Google, Deloitte, and Verizon to improve the reliability of the state’s online and telephone-based unemployment insurance application systems. There have been 350,000 claims in the last week. So far, 600,000 claims over the past three weeks have been successfully processed and over 200,000 are still in partial status.

Google helped New York design a revamped website and hopes the technology can be used by other overwhelmed states as well.

HEAVY INDUSTRY: Global manufacturing is at a standstill because social distancing has shut down factories.

— Toyota Chief Executive Akio Toyoda promised on Friday that the Japanese auto industry will protect jobs. Toyoda, speaking as head of the Japan Automobile Manufacturers Association, said that the group that brings together Japanese automakers including Nissan Motor Co. and Honda Motor Co., as well as parts makers, will set up a special fund to help people who have lost jobs find employment.

— French automaker Renault cancelled 300 million euros ($325 million) in dividend payments for 2019 and its chairman is taking a pay cut. Jean-Dominique Senard’s pay will be cut by 25% for the second quarter of 2020.

GOVERNMENTS AND CENTRAL BANKS: The U.S. this week announced another $2.3 trillion in funding to goose the economy, and other central banks are taking similar measures to keep national economies from sliding into deep recession.

— The Sri Lankan government has declared the producing of rice an essential service in a bid to ensure food security. Rice and curry is a staple meal in almost every household. There is a nationwide curfew and the government is delivering food to people's homes, but people have had difficulty finding rice on their own and prices are spiking.

— Spain’s economy minister Nadia Calviño said in an interview with Cadena SER radio that he wants Europe to launch “coronabonds,” shared debt backed by all 19 member countries that would be borrowed by the hardest-hit member nations at low interest rates. The Eurogroup’s agreement late on Thursday allows countries to borrow up to 2% of GDP from the bailout fund set up during the debt crisis a decade ago.

— Asian shares were steady in quiet Good Friday trading after Wall Street closed out its best week in 45 years thanks to the Federal Reserve’s titanic effort to support the economy through the coronavirus crisis. Many world markets were closed for Easter weekend holidays.