They aim to ease the flow of credit to businesses and households. 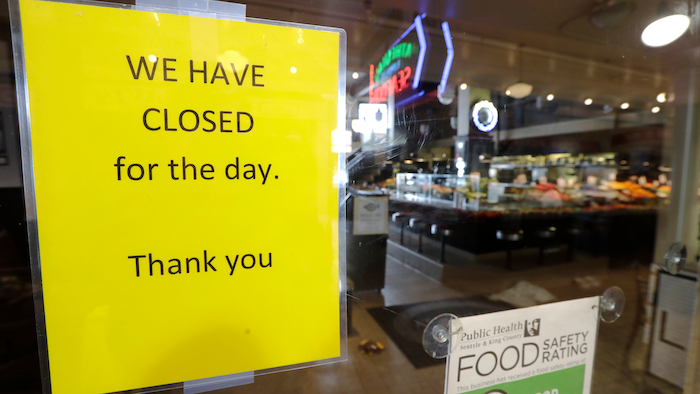 A sign advises of the closure of a restaurant at Pike Place Market on Tuesday, March 17, 2020, in Seattle. Many shops in the landmark market continue to remain open, though business has dropped considerably in recent weeks.
Associated Press

WASHINGTON (AP) — The Federal Reserve put in motion two emergency lending programs Tuesday that were last deployed in response to the 2008 financial crisis, aiming to ease the flow of credit to businesses and households struggling amid the viral outbreak.

The first, announced mid-morning, is intended to unclog a short-term lending market for what is known as “commercial paper.” Large businesses issue commercial paper, which is essentially the equivalent of an IOU, to raise cash to meet payrolls and cover other short-term costs.

“An improved commercial paper market will enhance the ability of businesses to maintain employment and investment as the nation deals with the coronavirus outbreak,” the Fed said in a statement.

The second program is also intended to mostly assist the commercial paper market and allows a wider range of financial institutions to access short-term loans from the Fed — in this case investment banks and securities trading divisions of large banks. It also allows them to pledge a wider range of collateral in return for the loans. The funds will then mostly be used to purchase commercial paper.

Both are revivals of financial-crisis era programs, and were set up under the Fed's authority to launch emergency credit programs with the approval of the Treasury Department.

They are also intended to ensure banks and large companies can access the cash they need even as financial markets seize up as Wall Street grows increasingly convinced the economy is entering a recession. That gloomy outlook leads financial institutions to pull back on lending, pushing up short-term interest rates. Funds borrowed from the Fed can then be used to lend more widely to households and businesses.

Borrowing rates in the commercial paper market have been spiking as more companies have sought to raise cash in the expectation that their revenue will plunge. When a company wants a short-term loan, say for three months, it sells the commercial paper, typically to a large bank or money market mutual fund.

But many money market funds are seeking to sell commercial paper themselves. They need to raise money because they expect large institutional investors to withdraw funds, and they need cash to cover those withdrawals.

All that activity has made it harder for banks and other companies to raise the cash they need.

“The goal is to prevent a larger catastrophe that includes soaring bankruptcies, unemployment and underemployment,” said Joe Brusuelas, chief economist at tax advisory firm RSM. “While we are encouraged by this policy step, the Treasury will need to step up with other funds and bridge loans” that can help companies with lower credit ratings. Only companies with top credit ratings are eligible to borrow from the Fed's new commercial paper program.

In its first announcement Tuesday, the central bank said it set up an investment vehicle to buy commercial paper with the approval of the Treasury Department. The Treasury has also committed to guarantee up to $10 billion of the loans to prevent the Fed from taking losses. Companies that borrow through the program will pay a small fee and interest.

It's not yet clear how large each program will be. The commercial paper market is worth $1.1 trillion “and it is possible that the Fed could own the vast majority of it,” said Mark Cabana, rates strategist at Bank of America Securities.

Mnuchin said Tuesday that the Fed could end up owning $1 trillion of commercial paper.

Leslie Falconio, senior fixed income strategist at UBS, said that in 2008 the Fed bought 20% of all the commercial paper then outstanding, or about $350 billion.

Tuesday's Fed actions come after the central bank unleashed a massive program of stimulus Sunday, when it cut its benchmark short-term interest rate to near zero and said it would purchase $700 billion in bonds. The Fed also allowed banks to lend from cash reserves that it had previously required banks to hold.

Many analysts say they expect the Fed to revive other financial-crisis-era programs in the coming days, including one known as the term auction facility, or TAF. That allows a wider array of banks to borrow from the Fed.

Experts also say that post-pandemic shoppers will be even more demanding.
May 27th, 2021
Follow Us
Most Recent