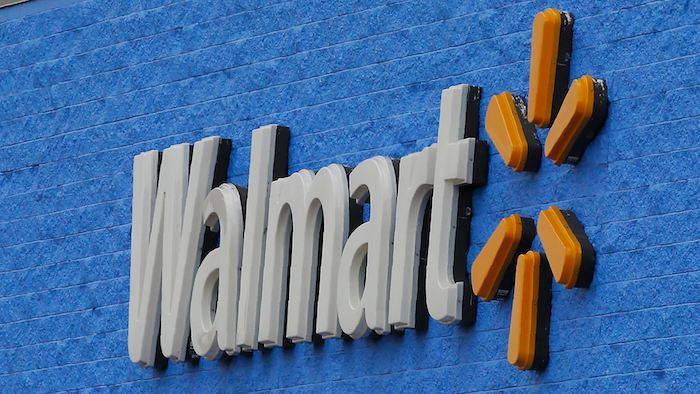 Signage is pictured at a Walmart store in Oklahoma City.
Associated Press

NEW YORK (AP) — Americans established trusted supply lines as the virus surged in new regions of the U.S. over the past few months and millions did so at Walmart, where online sales nearly doubled in the second quarter.

They shopped in Walmart's stores, too. Sales at U.S. locations opened at least a year jumped 9.3%, the company reported Tuesday.

Walmart topped almost all expectations by wide margins. However, the massive government stimulus meant to help Americans get through the worst of the pandemic has evaporated, while infections have not.

That appeared to play out during the most recent period for Walmart.

“As the benefits from stimulus wane towards the end of the quarter, we saw comp sales settle into a more normal range,” said CEO Doug McMillon.

Despite a huge quarter shares of Walmart Inc., after an initial surge, fell into negative territory before the opening bell.

Walmart quickly became a lifeline for consumers early this year when COVID-19 first began to spread in the U.S. In the first quarter, online sales spiked 74%. That trend accelerated in the second quarter and broadened the gap between traditional retailers, many of them anchor stores at the mall, and big box operators like Walmart and Target.

Net income for Walmart Inc. reached $6.48 billion in the quarter, or $2.27 per share. Earnings, adjusted for one-time gains and costs, were $1.56 per share, easily outpacing Wall Street projections of $1.22, according to a survey by Zacks Investment Research.

Profits are being eroded by the costs of doing business in the current environment. On Tuesday, Walmart said its costs related to COVID-19 hit $1.5 billion over the three-month fiscal period. That's up from less than $900 million in the first three months of the year.

Revenue, however, was $137.74 billion, also breezing past Wall Street projections.

Still, the surge in sales took place as the U.S. rolled out massive assistance plans for the millions who had lost jobs or who were furloughed.

That has helped keep sales flowing at major retailers. Also on Tuesday, Home Depot reported same-stores sales in the U.S. spiked 25% in its second quarter, with so many people working from home and taking on new projects.

But like Walmart, the sharp bump in company shares after it posted earnings began to fade with less than two hours before the opening bell.

The $600-a-week federal unemployment check that had been sent to roughly 28 million laid-off workers is gone. And a $1,200 stimulus check that was sent to many Americans in April and May appears to be a thing of the past. Negotiations in Congress on a new economic relief package have collapsed and there is no evidence of an agreement on more aid, at least in the near future.

That had been a big question mark for economists who are trying to determine where, or if, consumers will remain active.

Consumer activity drives about 70% of the activity in the U.S. economy.