Protesters who oppose a 63-year-old oil pipeline beneath the Straits of Mackinac demonstrated Wednesday at the home of Michigan Attorney General Bill Schuette, calling on him to shut the line down. 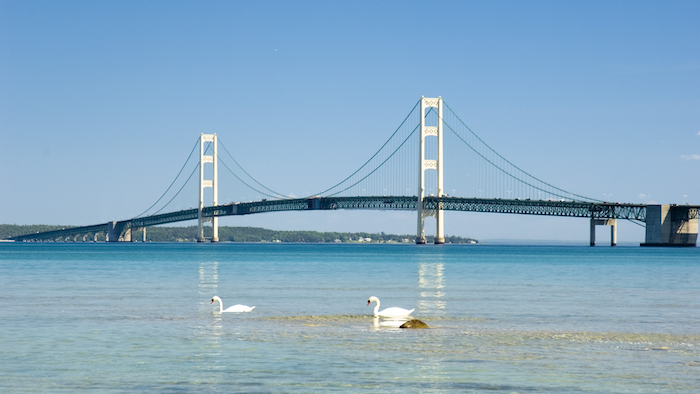 DETROIT (AP) — Protesters who oppose a 63-year-old oil pipeline beneath the Straits of Mackinac demonstrated Wednesday at the home of Michigan Attorney General Bill Schuette, calling on him to shut the line down.

Protesters held banners as they railed against the underwater pipeline in the waterway that connects Lake Huron and Lake Michigan. Authorities were called to the scene, though no arrests were made.

Enbridge Energy is based in Calgary in Alberta, Canada. Its Line 5 pipeline carries nearly 23 million gallons of light crude oil and liquefied natural gas daily. It runs underground across northern Wisconsin and the southern tier of Michigan's Upper Peninsula before dividing into two sections that extend across the bottom of the Straits of Mackinac. From there, it continues underground to refineries in Sarnia, Ontario.

Numerous elected officials, including Schuette, have raised concerns about Line 5 since another Enbridge pipelineruptured in southern Michigan in 2010, releasing more than 800,000 gallons of oil into the Kalamazoo River and a tributary creek.

The company said last month that it will spend $7 million over the next two years on additional equipment that could be deployed quickly in the event of a spill. The announcement came as Enbridge kicked off a three-day public relations tour in northern Michigan designed to convince residents the pipeline has never leaked, is in good shape and poses no risk to the scenic area and its tourism-based economy.

But Earth First! said it wants Schuette to use his authority to shut down the Straits of Mackinac pipeline to protect the Great Lakes.

Schuette spokeswoman Andrea Bitely said Wednesday that the attorney general has "made clear the pipeline is a risk and is working hard with all groups involved to find a public policy solution that protects the Great Lakes."

Bitely called the demonstrators a "mob" and "thugs." She said Schuette's wife, Cynthia, was home alone when the protesters showed up.

"This was a cowardly assault by professional protesters whose car license plates mostly appeared to be from out of state," Bitely said in an email. "For about 30 minutes, about 40 thugs pounded on the doors and windows, attempting to intimidate the attorney general's family and the attorney general in his role as the chief law enforcement officer for the state of Michigan."

"No arrests were made," Shaw said. "We stayed there until after they dispersed."