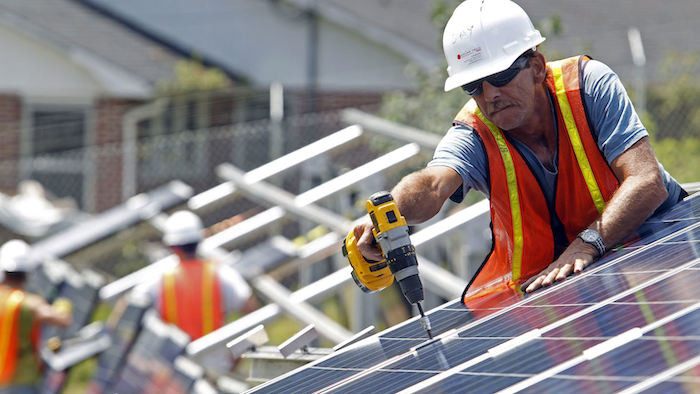 Solar energy proponents frequently tout the industry's vast jobs potential, but that's little solace for a majority of those laid off from positions in the nation’s lagging oil and gas industry.

The Wall Street Journal reports that some casualties of sharply lower oil prices and subsequent production cuts in Texas found new work in the state's burgeoning solar sector, and that many appear likely to stay put if the oil industry recovers.

But the paper also noted that some 150,000 Americans lost jobs in the oil sector — including 84,000 in Texas, the nation's largest producer, to date — while just more than 30,000 are expected to be added in the solar industry.

In addition, the new solar jobs generally aren't as lucrative as oil work, and many related construction jobs are only temporary.

But solar could offer some workers a reprieve from the boom-and-bust nature of the oil industry.

The Solar Foundation said that jobs in the sector more than doubled over the past six years and are projected to increase again, by nearly 15 percent, in 2016.

In Texas alone, the Journal notes that under-construction solar farms will eventually deliver 1,000 megawatts of energy. State utility officials expect that output to grow by 12,000 megawatts over the next 15 years.

The report, however, also coincides with a bankruptcy declaration by SunEdison, a prominent solar energy giant that fell on hard times amid a slew of large acquisitions and a trade battle with China.

Meanwhile, solar’s growth led some observers to worry whether Texas oil companies will be able to restore their workforces. The International Energy Agency expects the U.S. to resume record-high production levels by 2021, and oil prices are already showing some signs of recovery.