Toyota To Expand In Malaysia With $488M Plant

Japanese automaker Toyota Motor Corp. said Wednesday that it will build a second factory in Malaysia as part of expansion to meet rising local demand. 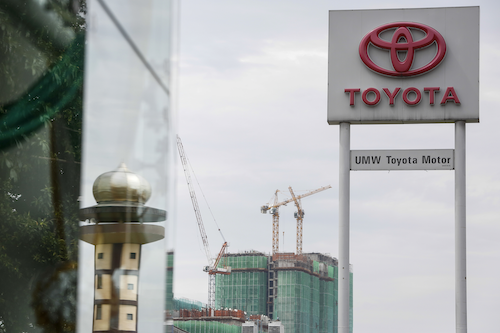 In this Tuesday, May 24, 2016 photo, a UMW Toyota signage is seen against a construction site at a sales showroom in Kuala Lumpur, Malaysia. Japanese automaker Toyota Motor Corp. said it will build a second factory in Malaysia as part of expansion to meet rising local demand. (AP Photo/Joshua Paul)

The new 2 billion ringgit ($488 million) plant will be built by Toyota and its local partner, UMW Corp. Toyota said that the plant, to be built in the central state of Selangor, will have an initial capacity of around 50,000 units a year.

The plant is expected to begin operations in early 2019 and will help double Toyota's production volume in Malaysia to around 100,000 units a year, said Akio Takeyama, deputy chairman of UMW Toyota Motor.

He said the new plant will focus on manufacturing passenger cars, including energy-efficient vehicles, while its current factory will churn out commercial vehicles.

Toyota sold nearly 94,000 vehicles in Malaysia last year. It used to be the best-selling foreign car in Malaysia, but was overtaken by Japanese rival Honda last year.