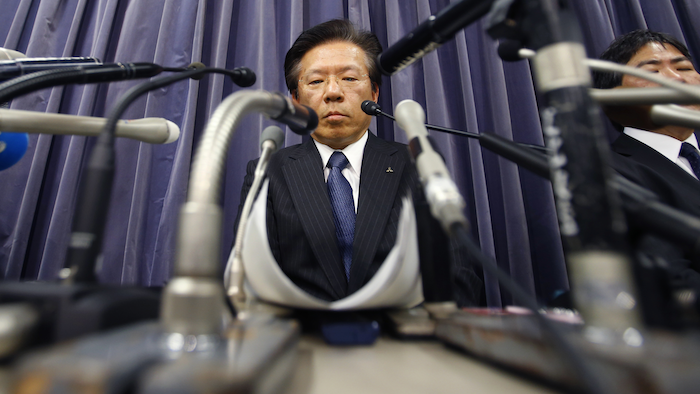 Mitsubishi Motors Corp. President Tetsuro Aikawa listens to a reporter's question during a press conference in Tokyo, Tuesday, April 26, 2016. Mitsubishi Motors, the Japanese automaker that acknowledged last month that it had intentionally lied about fuel economy data for some of its models, said an internal investigation found such tampering dated back to 1991. (AP Photo/Shizuo Kambayashi)

The Japanese automaker said last month that its employees reduced the resistance of vehicle tires — thereby distorting fuel economy by 5 to 10 percent — in four "mini-car" models, including two that were supplied to Nissan.

This week, Mitsubishi submitted the findings of its internal investigation to Japanese authorities and said that running resistance was improperly calculated in nine models currently sold in Japan along with some discontinued models.

The company also said that managers failed to properly communicate with those conducting the testing and that it is considering "drastic reforms" to prevent similar problems from reoccurring.

Mitsubishi stopped production of the mini-car models and is discussing how to compensate affected owners with Nissan. The company established a panel of outside experts in late April to conduct a more thorough investigation.

Officials said that it fulfilled testing requirements in vehicles sold overseas, but U.S. regulators have ordered additional testing of the five Mitsubishi models sold there.