German automaker Daimler AG said Thursday that its net profit fell 27 percent in the second quarter as the company confronted multiple challenges including trade tensions, weak pricing for its luxury cars, and recalls and product delays related to diesel emissions. 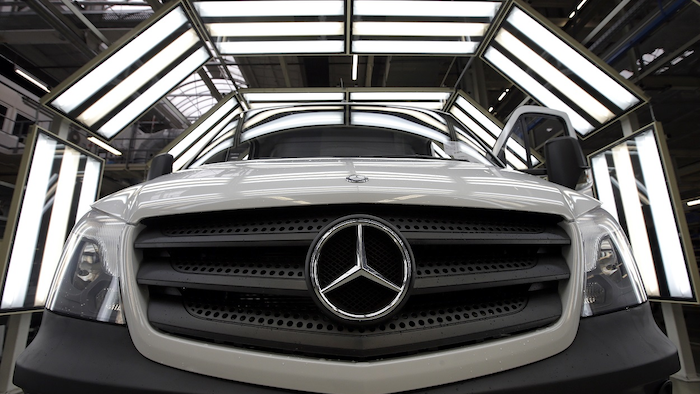 In this June 23, 2015 file photo a van is pictured in a light tunnel at the Mercedes-Benz automobile plant in Ludwigsfelde, near Berlin. Image credit: Photo/Michael Sohn, file

German automaker Daimler AG said Thursday that its net profit fell 27 percent in the second quarter as the company confronted multiple challenges including trade tensions, weak pricing for its luxury cars, and recalls and product delays related to diesel emissions.

The Stuttgart-based maker of Mercedes-Benz cars said it saw weaker prices for its luxury cars amid global tariffs. It also cited a fire at a U.S. supplier that caused a production shortfall, as well as unfavorable exchange rates and expenses to fix cars recalled for diesel emission problems.

The profit margin on sales at Mercedes, a key earnings metric, fell to 8.4 percent from 10.0 percent in the year-earlier quarter.

The company meanwhile said it was experiencing slowdowns in certification of models under new EU emissions testing standards as it works on software and clarifies technical and legal questions. Daimler is facing investigations of its diesel emissions practices in Germany and the United States. It has voluntarily recalled diesel vehicles to adjust engine control software to reduce emissions on already sold vehicles.

Diesel emissions came under scrutiny after Volkswagen was caught in 2015 using illegal software to turn emissions controls on when the vehicles were being tested and off in everyday driving. It emerged that other automakers' cars emitted more pollutants in everyday driving than during testing because the software turned down emissions controls to protect the engine under certain conditions. While that wasn't necessarily illegal, the testing procedures have been tightened to reflect real-world driving performance. Emissions-controlling software can be ruled illegal if it turns off emissions without good reason.

Earnings at the truck division were flat while profits at its bus division and financial services business both fell.

The company had already lowered its earnings outlook for the year, citing global trade tensions. China has announced it will raise tariffs on cars imported from the U.S. in response to tariffs announced by U.S. President Donald Trump. Daimler makes vehicles in the U.S. and exports them to China so those sales would be hit by the tariff. The new Chinese tariffs took effect July 6, after the end of the second quarter.

Other carmakers are also struggling with global trade tensions. General Motors this week said duties on steel and aluminum — a key material for cars — would raise its costs.

CEO Dieter Zetsche said in a statement that "the automotive industry, and therefore we too, have many challenges to overcome." Zetsche said the company would strengthen its position with upcoming new models and technologies. He cited the company's investments in connected, autonomous and shared vehicle technologies.