Welburn is widely considered to be one of the auto industry's most influential designers. Ed Welburn, head of global design for General Motors, stands next to company concepts and production vehicles on the grounds of the company's Technical Center in Warren, Mich. (AP Photo/Carlos Osorio)

During a visit to the Philadelphia Auto Show, 9-year-old Ed Welburn was spellbound by the 1959 Cadillac Cyclone, with its big fins and rocket-like front cones. Then and there, he vowed to become a designer for General Motors Co.

On June 30, he'll retire as GM's head of global design, a role that makes him one of the auto industry's most influential designers. He is also one of the industry's highest ranking African-American executives.

Welburn — the sixth design chief in GM's 108-year history — reinvigorated design at the company. After GM shed excess brands like Pontiac in its 2009 bankruptcy, Welburn gave the remaining ones a fresh identity, turning out bold, chiseled Cadillacs and elegant Buick sedans. If you look closely, you might see his nod to the Cyclone's tail fins in the 2010 Cadillac SRX.

Welburn, who joined GM in 1972, also is credited with pulling together GM's 10 global design studios — which had operated independently — and working more closely with engineers and marketers from the very beginning of a car's development.

"I firmly believe that the best vehicles happen when you have great collaboration between designers and engineers. If you don't have it, you can forget about it," he said.

Welburn still sketches every vehicle the company is working on, but doesn't share his drawings with his team — they still need to come up with their own ideas. For a high-ranking official in a cutthroat industry, Welburn is surprisingly soft-spoken and courtly. He favors tailored suits and cufflinks in an era where most designers are clad in jeans.

In his office overlooking GM's historic design dome — where every car has gone for final approval since 1956 — Welburn says he feels like his work at GM is complete. He's planning a two-week spin through Europe in his new Chevrolet Corvette, one of the vehicles he helped design. 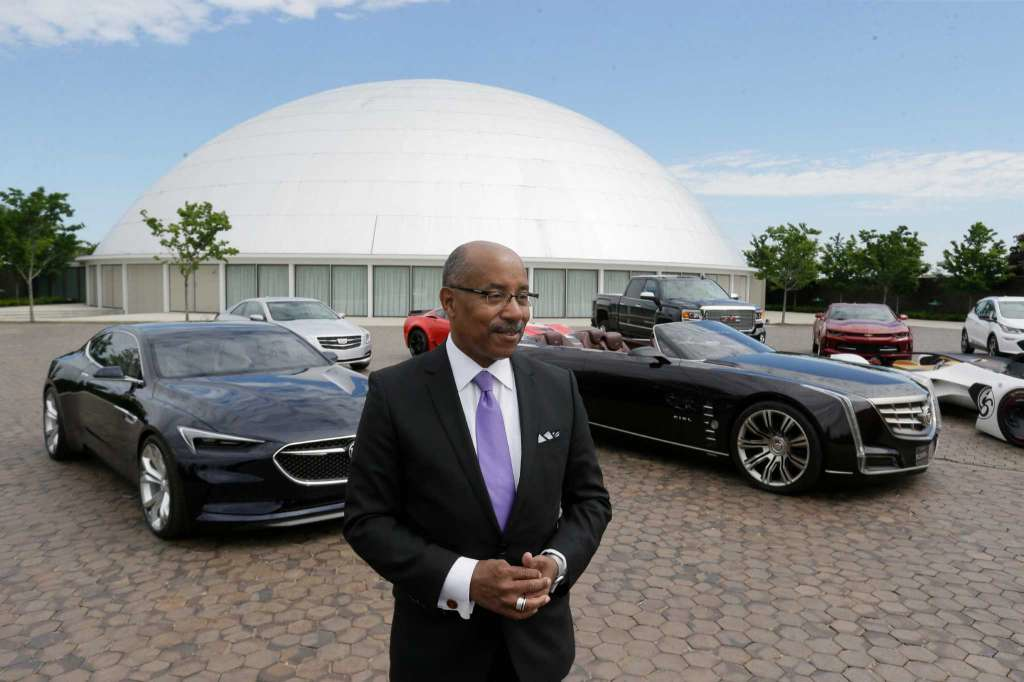 Ed Welburn, head of global design for General Motors, stands next to company concepts and production vehicles on the grounds of the company's Technical Center in Warren, Mich. (AP Photo/Carlos Osorio)

Here are Welburn's answers to questions from The Associated Press. They have been edited for length.

Q: Is it important to you that you were the first African-American chief designer at a major automaker?

A: It's nothing that I dwell on or celebrate. It didn't take me long to understand the first week that I was here, there was a responsibility I had. Everyone wanted to know what I could do. I was representing more than myself, right or wrong. There's a certain amount of pressure that goes with that.

Q: What is your legacy at GM?

A: I believe that we have created a culture in which design and engineering really work together. You have to have that in creating the fundamentals of the vehicles, the basic architecture. If you get great proportions, then it's much easier for a designer to style it. If you don't have that great proportion, then designers do some bad things to try to make up for shortcomings. I think a huge part of (my legacy) is the collaboration between design and its partners, as well as establishing this very powerful global design organization.

Q: Have you been able to attract design talent to Detroit?

A: The challenge is attracting digital sculptors. They're very talented and it's a very limited pool. They're sculpting in the computer. They can create just about anything, and every industry needs them, including the film industry. So we're competing with them as well as Silicon Valley. Years ago it was very difficult to get anyone from California to come here. You create the right environment and they see what we're doing. It's not easy, but it's a whole lot easier than it was 10 years ago.

Q: Of everything you've designed or been in charge of here, what car is your favorite?

A: There's so many projects I love for so many different reasons. The Corvette project, the latest C7. With this one, the average age of the customers was getting higher, sales were going down. We needed to make a course correction. It needs to be obvious it's a Corvette, but it needs to be obvious that it's a new Corvette. I decided since we had designers in studios around the world, to offer up to every designer to submit their idea. Ultimately the design came from the Corvette team, but it was fascinating to see how each one of those studios interpreted it differently.

Q: With new ways of powering vehicles, will designs change?

A: It depends on the propulsion system. If it's electric, I think it can give us more flexibility, the ability to put a greater focus on the interior space and comfort. Autonomous vehicles, as well, will do that. At the end of the day, a beautiful vehicle, no matter how it's propelled, will win.