American could use Airbus instead, Boeing's archrival. 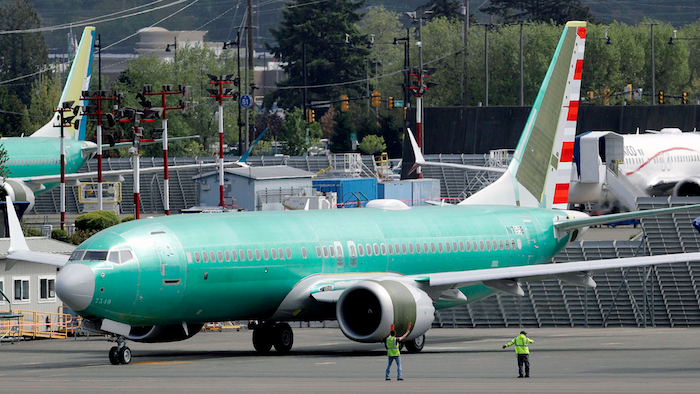 DALLAS (AP) — American Airlines is warning Boeing that it could cancel some overdue orders for the grounded 737 Max unless the plane maker helps line up new financing for the jets, according to people familiar with the discussions.

American's stand comes as airlines are finding financing increasingly difficult and expensive as the coronavirus pandemic has crippled their operations.

American had 24 Max jets before they were grounded in March 2019. It has orders for 76 more but wants Boeing to help arrange financing for 17 planes for which previous financing has or will soon expire, according to three people who spoke Friday on condition of anonymity to discuss private talks between the companies.

If the companies can't reach an agreement, American could use Max financing that is about to expire to pay for jets from Boeing's archrival Airbus, one of the people said.

Chicago-based Boeing said in a statement that it is working with customers during “an unprecedented time for our industry as airlines confront a steep drop in traffic," but did not comment on the talks with American. The Fort Worth, Texas-based airline declined to comment.

News of American’s threat to cancel some orders was first reported by The Wall Street Journal.

The situation underscores the strain facing airlines during the coronavirus pandemic. It has grown more difficult and expensive for them to finance planes. American’s negotiating stance doesn’t reflect a loss of confidence in the plane’s safety, the sources said.

The Max was Boeing's best-selling plane before crashes in Indonesia and Ethiopia killed 346 people and led regulators around the world to ground all Max jets.

The coronavirus pandemic has compounded Boeing’s problems by causing a sharp drop in air travel and a loss of interest in new planes. Nearly 40% of the world’s passenger jets are idled, according to aviation data supplier Cirium, as most airlines have more planes than they need until travel recovers.

That has made it more difficult to finance planes. United Airlines and Southwest Airlines found foreign lenders who agreed in April and May to buy Max jets and lease them to the airlines, but those carriers are in stronger financial situations than American.

The 17 planes in dispute were supposed to have been delivered to American at least a year ago. That has given the airline the option of canceling the order without penalty and recovering its down payments now, according to one of the people familiar with the matter. The deliveries have been delayed while Boeing works to fix a flight-control system suspected of playing a role in the crashes.

Airlines have canceled orders for more than 400 Max planes so far this year, and 320 are no longer certain enough to count in Boeing's backlog. Some were dropped because the airline buyer ran into financial problems, while others were swapped for different Boeing planes. The company had taken 4,619 orders through May.

Air travel in the U.S. fell about 95% from the beginning of March until mid-April. Traffic has recovered slightly since then, but remains down more than 70% from a year ago. With little revenue coming in, airlines are slashing spending and preparing to furlough thousands of workers this fall.

American has accepted $5.8 billion in federal aid to pay workers through Sept. 30, reached tentative agreement on a $4.75 billion federal loan, and lined up billions more in available cash from private lenders to survive the travel downturn.