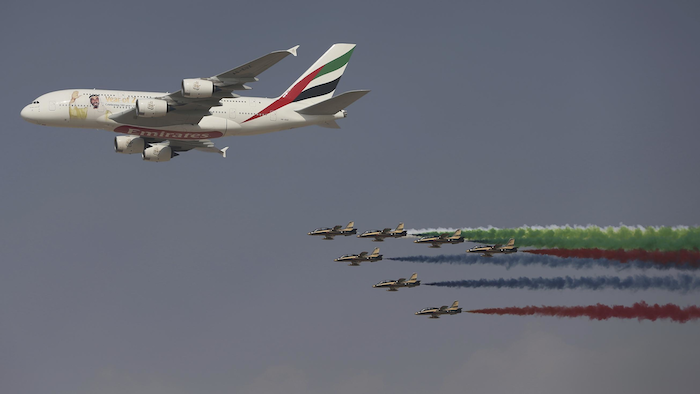 Long-haul carrier Emirates purchased 40 American-made Boeing 787-10 Dreamliners on Sunday at the start of the biennial Dubai Air Show, a $15.1 billion deal certain to please U.S. President Donald Trump who has touted the plane's sales as a job creator in America.

The deal appeared to surprise Boeing's archrival Airbus, whose staff had attended a long-delayed news conference and left the room just moments before the announcement.

Airbus has pinned hopes of continuing production of its double-decker jumbo jet on Emirates, the world's largest operator of the aircraft which took delivery of its 100th A380 earlier this month. Reports circulated before the air show that a major A380 sale would be coming.

But instead, Emirates CEO and Chairman Sheikh Ahmed bin Saeed Al Maktoum explained how the airline considered the Airbus A350 and decided to pick the Boeing 787-10.

"We were comparing the two apples," he said, but found that the Boeing 787 is "the best option" for Emirates "given its maintenance and so on."

It's the second time Airbus has lost out on selling the A350 to Emirates. In June 2014, the state-owned Emirates cancelled an order for 70 A350s after a "fleet requirement" review.

Chicago-based Boeing Co. already has 171 787-10s on order. Among those waiting for the aircraft are Abu Dhabi-based Etihad.

The twin-engine 787-10, however, has been a focus of Trump since he came into office. In February, he visited the Boeing plant in North Charleston, South Carolina, which manufactures the carbon-fiber, 330-seat plane Trump described as "an amazing piece of art."

"As your president I'm going to do everything I can to unleash the power of the American spirit and to put our great people back to work," Trump said at the time. "This is our mantra: Buy American and hire American."

Sheikh Ahmed made a point to say the deal will help create more jobs, echoing Trump's mantra. The deal was signed in the presence of Dubai's ruler, Sheikh Mohammed bin Rashid Al Maktoum, who also serves as the United Arab Emirates' prime minister and vice president.

"The order will take Emirates' total (number of) wide body aircraft of the Boeing to 204 aircrafts, units worth over $90 billion," Sheikh Ahmed said. "This is a long-term commitment that supports hundreds of thousands of jobs, not only at Boeing but also throughout the aviation supply chain."

Trump and the White House made no immediate comment on the sale amid the president's trip to the Philippines on Sunday.

Emirates' business has suffered under Trump's travel bans affecting predominantly Muslim nations, as well as the recent ban on laptops in airplane cabins. Emirates said it slashed 20 percent of its flights to the U.S. in the wake of the restrictions, though Dubai International Airport remains the world's busiest international travel hub. 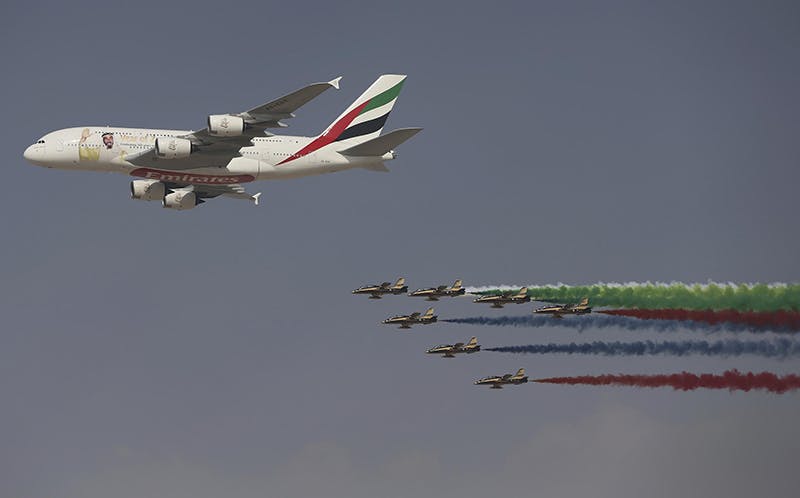 Emirates now relies solely on the Airbus 380 and the Boeing 777 for its flights, making it the largest operator of both. It now has 165 Boeing 777s in its fleet today.

Last week, the U.S. plane manufacturer secured an order valued at more than $37 billion at list price for 300 of its single-aisle and double-aisle planes during Trump's visit to China. Trump also was present for the signing ceremony last month between Boeing and Singapore Airlines for 39 new aircraft, including 19 of the 787 Dreamliner, in a deal worth up to $14 billion.

While a big sale, the Dubai Air Show opened Sunday on what seemed to be a quieter note. The only other major sale for airplane manufacturers involved Azerbaijan Airlines, which will buy five Boeing 787-8s, two other freighter aircraft and landing gear maintenance from it for some $1.9 billion. The UAE's Defense Ministry signed a $1.6 billion deal with Lockheed Martin to upgrade dozens of its F-16 fighters.

It's a far cry from 2013, when airlines made $140 billion in new orders before the collapse of global oil prices. Prices have rebounded recently to around $60 a barrel.

Other airlines than Emirates are taking part, but missing from the trade show this year is one of the region's largest long-haul carriers, Qatar Airways, amid a diplomatic fallout between Qatar and four Arab nations. Qatar Airways previously had played a big role in the Dubai Air Show, reserving a large pavilion and displaying its latest aircraft to visitors. 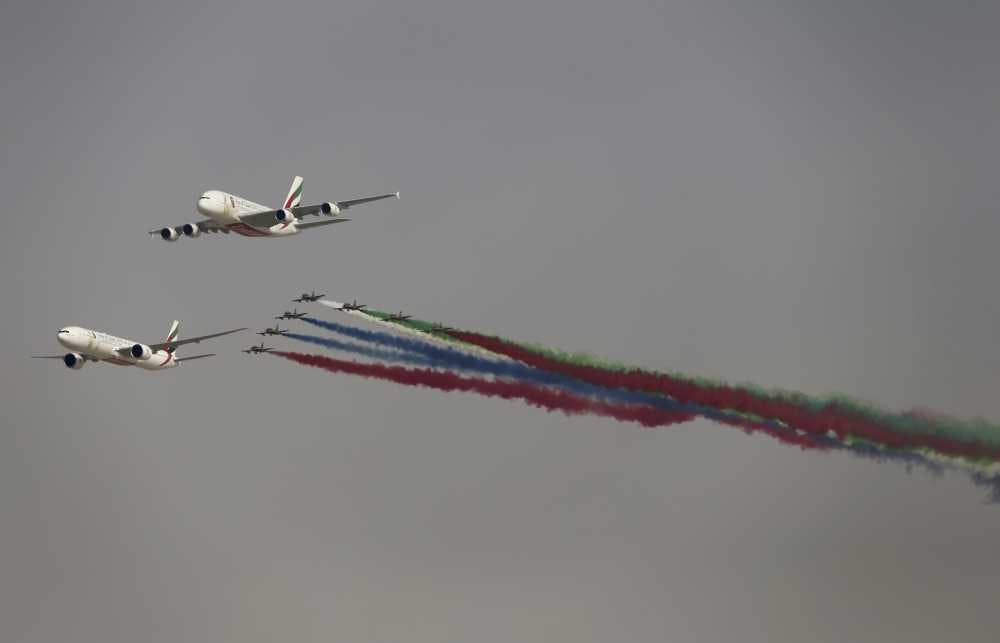 Saudi Arabia, the United Arab Emirates, Egypt and Bahrain cut ties with Qatar in June over its ties with Iran and its support of Islamist groups, accusing the small Gulf state of supporting extremists, charges it denies. The Arab quartet cut direct flights with Qatar and closed their airspace to Qatari aircraft.

In an industry first, passenger suites in the middle aisle without windows will be fitted with "virtual windows" relaying the sky outside via fiber optic cameras on the plane. There's also a video call feature in the suites that connects passengers to the cabin crew, as well as temperature control and various mood lighting settings.

Emirates President Tim Clark declined to say how much a ticket in the 40 square-foot (3.7-square-meter) private suite will cost. The private suites will be available on the airline's Boeing 777.