Photos Of The Day: NASA Study In Hawaii Paving Way For Human Travel To Mars

NASA researchers are poised to enter an isolated geodesic dome on a remote Hawaii volcano to study human behavior in long-term space exploration. 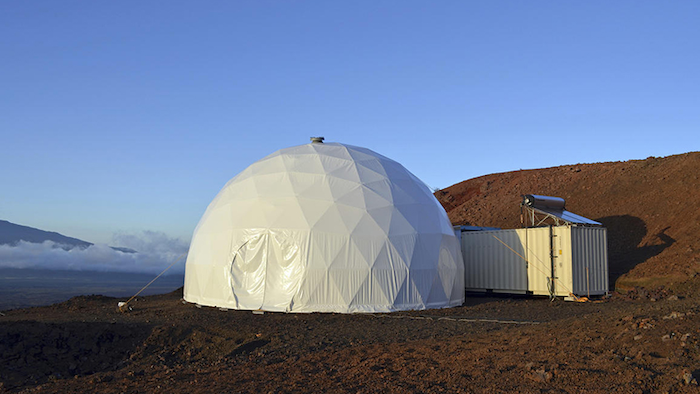 A group of NASA-funded researchers is poised to enter an isolated geodesic dome on a remote Hawaii volcano to study human behavior in long-term space exploration, including a planned voyage to Mars.

The six scientists enter their new home Thursday on the Big Island's Mauna Loa volcano for an eight-month stay.

The team will have no physical contact with people in the outside world and will work with a 20-minute delay in communications, the time it would take for an email to reach Earth from Mars.

The study will assess the psychological difficulties associated with living in isolated and confined conditions for an extended time.

The project is designed to help the U.S. space agency send humans on long space voyages including to Mars by the 2030s. 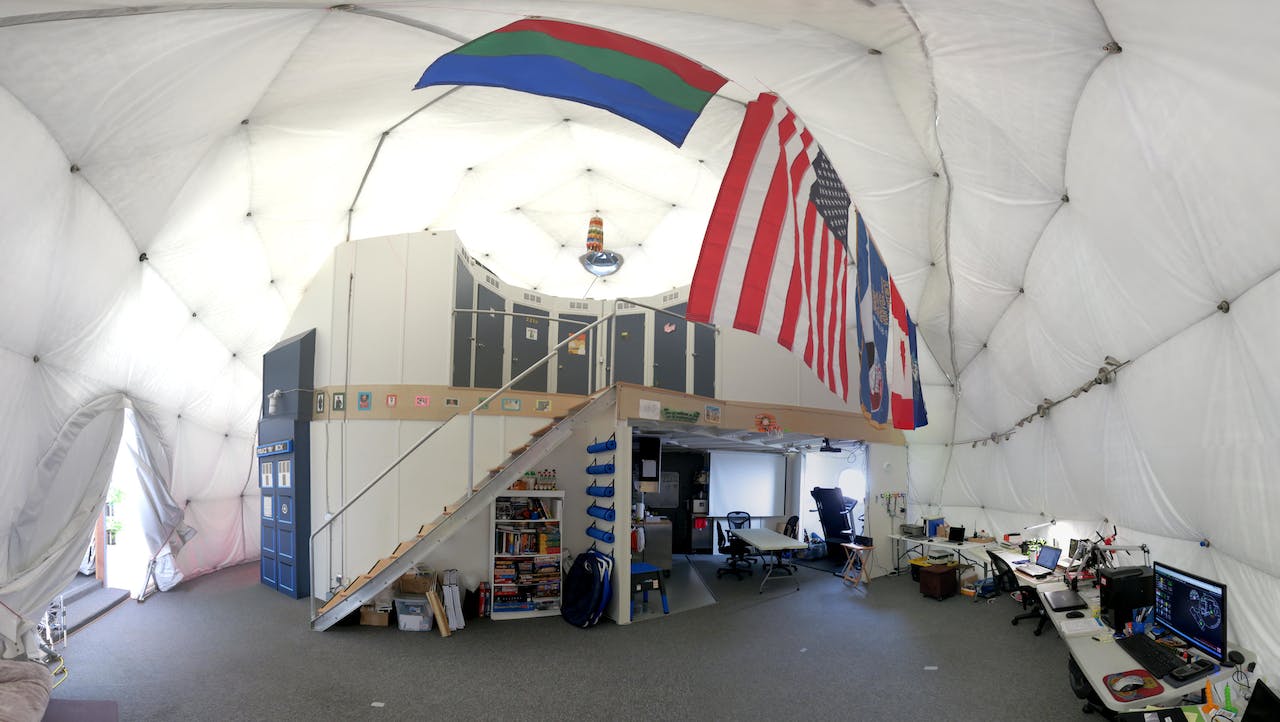 "We're hoping to figure out how best to select individual astronauts, how to compose a crew and how to support that crew on long-duration space missions," principal investigator Kim Binstead, a University of Hawaii science professor.

She said NASA's timeline is realistic unless the agency is "directed to do something different by the new administration."

Trump's transition team did not respond to an emailed request for comment on NASA's plan.

Leading the crew is mission commander James Bevington, a freelance space scientist who has acted as a visiting researcher for the International Space University. The other team members include engineers, a computer scientist, a doctoral candidate and a biomedical expert.

They were selected from a group of 700 applicants that went through cognitive and personality tests as well as extensive interviews.

"When I started, my biggest fear was that we were going to be that crew that turned out like Biosphere 2, which wasn't a very pretty picture," Bevington said.

Biosphere 2 was a 1990s experimental greenhouse-like habitat in Arizona. It housed different natural ecosystems and a small crew in an effort to understand what would be needed for humans to live on other planets. 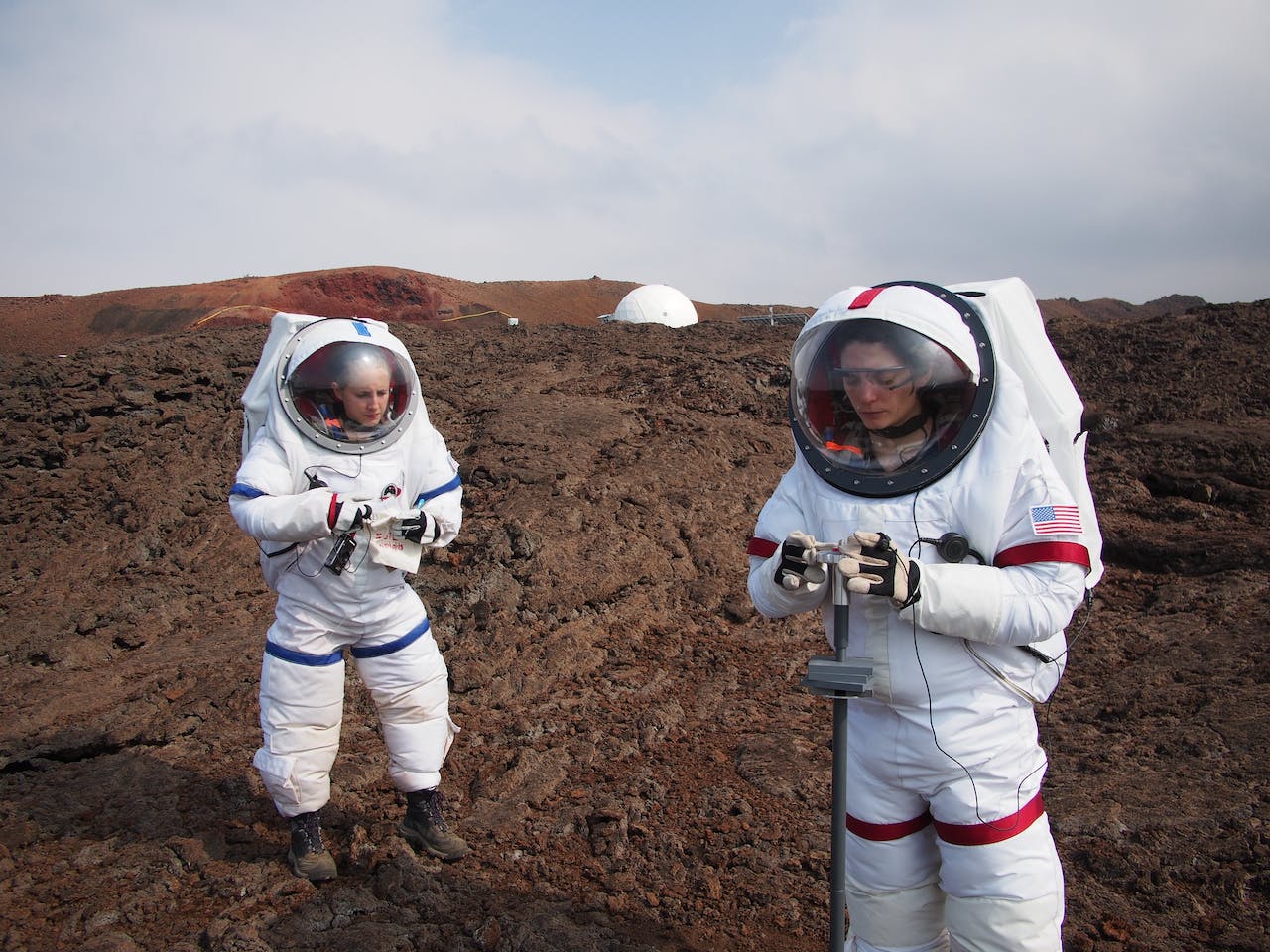 Lucie Poulet, right, uses a geotechnical tool while Annie Caraccio records the data during a previous study outside the domed structure that will house six researchers for eight months in an environment meant to simulate an expedition to Mars, on Mauna Loa on the Big Island of Hawaii. (Sian Proctor/University of Hawaii via AP)

The experiment quickly spiraled out of control as the habitat failed to maintain safe levels of carbon dioxide and the crew grew discontent.

The latest HI-SEAS mission is the third round of research funded by NASA, which has dedicated over $2 million to the Hawaii project. Previous missions focused on food requirements and crew cohesion.

"Mars is one of the best places in the solar system to look for signs of past or current life," said Binstead, adding that would be the most significant scientific discovery "of all time."

Furthermore, man-made disasters or natural catastrophes such as an asteroid hit could force a human exodus from Earth, she said. "Right now, all of our eggs for life are in one basket. I think it's a good overall strategy for us as a species to spread out further."

The researchers will wear devices around their necks that measure their moods and proximity to other team members. They'll also use virtual reality devices to simulate familiar and comforting surroundings they wouldn't have access to while living on Mars. 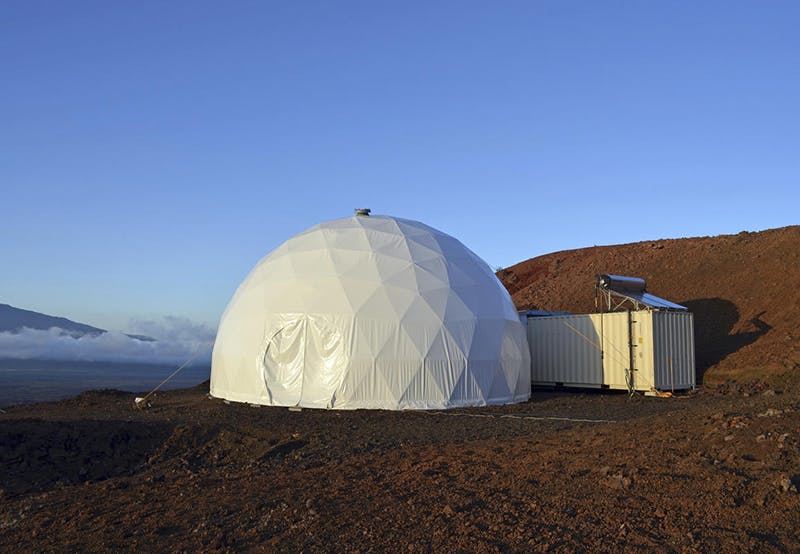 They will wear space suits whenever they leave the compound to conduct daily tasks including geological and mapping studies. The crew eats mostly freeze-dried foods that have a long shelf life. Some canned food and lightweight snacks are also brought in, including one of Hawaii's favorites.

"Spam gets quite popular," Binstead said.

Occasional resupply deliveries are recovered with a robot in order to maintain the crew's isolation. The 1200-square-foot simulated space home has small sleeping quarters for each member as well as a kitchen, laboratory and bathroom.

The University of Hawaii operates the facility called Hawaii Space Exploration Analog and Simulation, or HI-SEAS.

There are a number of other Mars simulation projects around the world, but the Hawaii project has been receiving federal funding for several years and is unique, the university says, because of its accessibility, weather and Mars-like geography, tucked away on a rocky, red plain below the summit of the world's largest active volcano.

The company said it ended last year with a backlog of 7,082 aircraft on order.
Jan 11th, 2022
Follow Us
Most Recent